Are there any other factors that might cause me to avoid ammo?

Sellier & Bellot (S&B) and all Russian-made ammo, with the exception of some Wolf-brand loadings, use steel-jacketed bullets.

Opinion: Sellier & Bellot has increasingly been causing "Kabooms" (kB!s)--causing rifles to explode because of weak casings and poor quality control. You may wish to avoid this ammo. 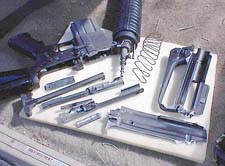 Kaboom! A victim of bad reloads