So which ammo is better, M193 or M855? And what is all this discussion about fragmentation? Are these dumdum bullets?

This is quite a point of debate and you can easily start a flame war just by asking. But, in our view, and though it depends on the specific circumstances, in almost every case, the strengths of M193 are a lot more important than those of M855.

Let's be clear. Neither M193 or M855 are match quality rounds. They certainly can get you near 1 MOA (minute-of-angle) accuracy closer up and 1.5-2.0 MOA farther out (200-300 meters) if your rifle does the job and you're helping it along. But since you're asking about military spec ammo and not match ammo, we assume you don't need hyper accuracy. For anything out to 300 meters both of these rounds are pretty accurate anyhow. If you need to reach out farther, well, you should maybe consider heavier match quality rounds or move up to 7.62×51mm.

M193 and M855 are military rounds designed to be inexpensive to produce and effective against personnel. Framing the debate between the two, we assume the main criterion is: how effective are they against live targets as a self-defense ammo? That being said it's important to understand how they work against personnel. That means we first need to talk about wound ballistics.

Despite what the media, Bruce Willis, and Arnold Schwarzenegger may suggest, the only certain way to incapacitate an attacker is to cause significant damage to the Central Nervous System, or cause enough loss of blood to shut down the attacker's higher (and potentially lower) brain functions. There are certainly psychological factors that might stop an attacker ("I've been shot!"), but depending on these is probably not a good idea, and discounts the possibility that the attacker's state of mind is altered chemically or emotionally to a point where being shot won't seem like that interesting a distraction. That means you want to:

After a great deal of study, and the conclusion that their then-current 9mm duty loads were a failure for their purposes, the FBI set up a comprehensive set of ballistics testing protocols. These represent a very good model to judge a rounds performance by. The FBI protocols use 12 inches as a penetration minimum in calibrated ballistic gelatin and looked for consistent 12"-18" penetration as an ideal. As a general matter, major vessels and organs can be reliably damaged with 6 inches of penetration. Ideally, then, you want a wound profile that penetrates at least 12" and does most of its damage between 4" and 12" of penetration. Of course, its always more effective to leave entry and exit holes to encourage bleeding. Shot placement is always important as well. No round will do you any good in the wall next to the attacker.

Unlike most FMJ rounds, M193 and M855's primary wounding mechanism is fragmentation. This is a good thing because without fragmentation these rounds otherwise would act like a ice pick and cause very little damage because of their small size. At the proper velocity, both M855 and M193 strike flesh and immediately begin to yaw (tumble). Contrary to rumor and popular media belief, this is not unique to these rounds. All FMJ bullets with tapered noses will tumble in flesh with enough velocity, because their center of gravity is aft of their length center--causing them to want to travel "tail first" in denser mediums (like water and tissue).

If the rounds are moving fast enough when they yaw to about 90 degrees of their original trajectory the stress on the bullet from traveling sideways through a dense medium (tissue) will overcome the structural integrity of the bullet and it will start to break up.

If the velocity is high enough this breaking up is pretty dramatic and causes equally dramatic wounds. This is because the fragments travel rapidly through the temporarily crushed tissue and tear it. Most tissue is very elastic and will stretch quite far before returning to its normal shape (this is called the temporary crush cavity) but the addition of quickly moving fragments makes permanent the cavity that might otherwise have returned after the impact and therefore creates a much larger wound.

The block of gelatin struck by the SA 1986 M193 round. (Notice the wound cavity near the left side, where the round entered the block and the pair of dark fragments near the top in the center of the block). (Source: Tatjana and Derek F.)

The most significant difference between M193 and M855 is that inside 100 meters or so M193 will yaw more quickly and fragment more substantially than M855. M193 also tends to be more accurate under 100 meters or so. M855, by virtue of its greater length, tends to catch up with M193 speed of yaw and degree of fragmentation outside of 100-150 meters or so. Unless you live in an area that is very open, flat, and not populated, the chances are far greater that you'll need effective close-range performance a lot more than the increased long distance performance that M855 is designed for. Remember also that even in large infantry engagements, the average range of engagement is less than 200 yards; 50 yards in jungle conflicts like Vietnam.

How do you plan to have to use these rounds in a self defense situation? How far will an engagement be? Likely, if you are in a "lone actor" situation you won't want to press an engagement if it is at ranges of over 150 yards. Ideally, that's an "escape and evasion" mission, not a good target opportunity. This probably means you're going to be dealing with engagements inside 150 or even 100 yards. That's probably where "escape and evasion" turns into "engage the enemy." Of course, your mileage may vary. 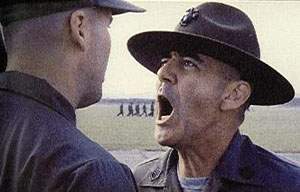 Fragmentation is an outstanding wounding mechanism.
Fragmentation causes significantly larger wound profiles with M193 and M855 (as well as lighter rounds like 50gr and 55gr JSP or JHP) than controlled expansion rounds do. The size of these wounds make torso hits devastating and in non-torso hits can cause enough vascular damage to increase the rate of "bleed out." The penetration of M193 and M855 in tissue is not compromised by the fragmentation either, as large portions of the round, particularly the nose, retain enough mass to penetrate out to 14.5" after fragmentation. Because effective rounds need to do the most tissue damage possible, fragmentation is an ideal wounding mechanism and gives the small 5.56mm round more "bang for the buck" than even 7.62mm rounds that don't fragment.

Fragmentation is a weak and unreliable wounding mechanism; controlled expansion is where its at.
While fragmentation is effective in certain circumstances, it is unreliable at longer ranges. A failure to fragment in a FMJ round like M193 or M855 means the round becomes a glorified .22LR. For engagements outside of 200 meters, fragmentation is of limited utility because of lower velocities. Controlled expansion, the same mechanism used in most hollowpoint handgun rounds, is far better understood, predictable and does not require high velocities for its effect. Controlled expansion is a proven design with thousands of rounds performing well in a variety of circumstances from hunting to law enforcement. Using rounds that utilize controlled expansion increased the effective range of the AR15 and makes it a better, more flexible defensive weapon. 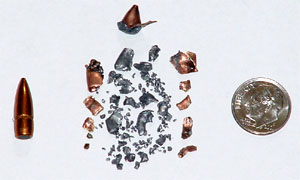 An unfired Mil-Spec M193 1986 South African surplus bullet and the same bullet type after a ~3150fps encounter with ballistic gelatin. About 98% of mass and over 150 fragments recovered. (Source: Tatjana and Derek F.)