So, velocity is a critical component for the wound profile. How fast must the bullet be traveling when it hits its target in order to fragment reliably?

Testing by combat surgeon Col. Martin L. Fackler, MD (USA Medical Corps, retired), determined that M193 and M855 bullets need to strike flesh at 2,700 feet per second in order to reliably fragment. Between 2,500 fps and 2,700 fps, the bullet may or may not fragment and below 2,500 fps, no significant fragmentation is likely to occur. If there isn't enough velocity to cause fragmentation, the result is a deep, 22 caliber hole, except an area where the yawing occurred, where the diameter of the hole grows briefly to the length of the bullet. 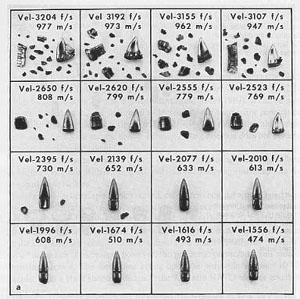 Fackler is a genius.
Dr. Fackler's work in simulated tissue (ballistic gelatin) has made it easy to understand why bullet designs work and why they fail. His common sense approach to ballistics research is invaluable in helping us select defensive rounds based on their real performance. Ballistic gelatin was developed to simulate the average of human tissue based on thousands of actual wounds, animal tests and battlefield surgeon observations (including by Dr. Fackler) and as a result is an effective medium to test round performance in.

Fackler is a fraud/misinterpreted.
Fackler works with ballistic gelatin. I've never seen a block of gelatin commit a violent crime so I'm not very interested in shooting one. What counts is the proven performance of rounds in actual shooting incidents. Gelatin is not human tissue. There are no bones, cavities or other organ like structures in gelatin. Regardless, Fackler's work is overcited and used to support questionable theories about terminal performance.