OK, what is all this stuff about rifle twists and different ammo?

Rounds in flight spin for stability because of the rifling on the inside of the barrel. Depending on how much they spin, they are more or less stable in their flight and therefore more or less accurate. The earliest AR15s from the early 1960s had a twist rate of 1 complete twist every 14", or 1:14. This was increased to a twist rate of 1 turn in 12" for the M16, XM16E1, M16A1, and later rifles and carbines. The current M16A2s and up and the M4 carbines have a much faster twist rate, 1 turn in 7". The reason for the 1:7 twist is mainly to stabilize the M856 tracer bullet, which is much longer than other bullets. You will recall from above that the M856 was designed to provide 800 meters of trace out of the SAW.

All this has some ramifications for ammunition selection depending on your rifle's rate of twist.

You can also overspin projectiles and cause overstability. This results in the not-so-desirable condition that keeps the nose of the round pointed high, as illustrated below: 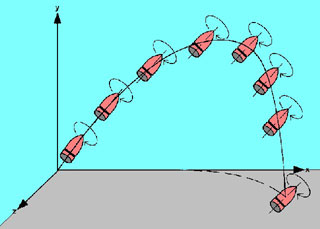 You can also spin them so hard they fly apart. That's rare, but it happens if you are dealing with very tight twists and very high velocities. When fired at 3200 fps in a 1-in-7 twist rifle, a round is rotating at over 300,000 rpm when it leaves the muzzle. Light, thin-jacketed varmint bullets (i.e., 40gr Hornady TNT or Federal Blitz bullets) often can't take that much spin and will pull themselves apart. 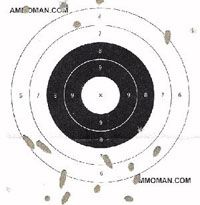