Moly sounds hella-cool. I'm going to use it with all my rounds from now on!

Slow down there chief, Moly isn't sliced bread or anything.

The biggest downside is that Moly is hygroscopic – meaning it is capable of absorbing water from the air. This water is then trapped between the moly coating and the barrel, which is definitely not a good thing. A quick fix to this problem is to run an oiled patch through the barrel after each shooting session. The oil will block moisture from being absorbed.

Moly is also extremely messy, and it likes to stick to everything. It is also easily rubbed off of bullets, leaving a slippery film on whatever it touches. With practice and experience, however, this can be minimized.

The biggest threat to barrel life is not addressed by the use of moly coated bullets: Throat erosion. Throat erosion is not caused by the friction of the bullet, rather the high pressure and high temperature gases that are present in every shot. It is not very often that a rifle barrel wears out it’s rifling before it suffers from extensive throat erosion. 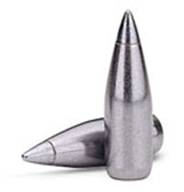