What is the best round for match use?

Entire books have been written to attempt to answer this question, so I'll be very general. Accuracy most relies on the quality of the barrel and the bullets, with the bullets having the largest impact. Bullets loaded with Sierra's MatchKing line, such as Federal Gold Medal Match, have the largest following, with Hornady's A-Max bullets also very popular. Bullet weights vary depending on what ranges a match will be shot at. For ranges of less than 600 yards, the 69gr MatchKing or Amax are the most common choices and will fit in and feed from a magazine normally. For 1,000 yard competition, 77gr and 80gr MatchKings are typical (both require a 1:8 or tighter barrel twist). These bullets must be loaded too long to fit into the magazine and must be fed one-at-a time by hand. However, they have taken top honors at Camp Perry, outclassing other Service Rifles.

One of the reasons match bullets are more accurate than FMJ bullets is because the bases of FMJ bullets are open, with exposed lead. This is because the lead core is inserted into the jacket nose-first, leaving the lead exposed at the base. Match bullets are made by inserting the core into the jacket base-first, allowing a uniform bullet base and leaving a hollow point at the nose. Note that match hollow-point bullets were not designed to expand and usually don't, so they should not be used for hunting.

If you can find it, GP90 (for a military round) or Ruag (SW) Match ammo (also from Switzerland) is amazingly accurate, by some accounts more so than the Federal Gold Medal or the MatchKing rounds.

Cross section of the Sierra MatchKing JHPBT round 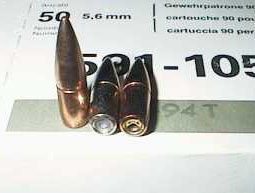