But what about specialty commercial rounds, like TAP, hollowpoints, and softpoints? Aren't they better than Mil-Spec ammo for defensive use?

It really depends what you are looking for. In general Soft Point, Jacketed Soft Point and Jacketed HollowPoint rounds use controlled expansion as a wounding mechanism, rather than fragmentation. The yawing effect of FMJ bullets is frustrated by JSP and JHP rounds because the nose flattens down on impact (like a mushroom) and moves the center of gravity forward on the bullet. As a result, the bullet doesn't yaw, but instead gets its stability from the transfer of the center of gravity. Generally these rounds continue forward in tissue nose-first instead of trying to turn tail-first.

Some very light JSP or JHP rounds will still fragment because their jackets are so thin and their velocity is much higher (up to 3800 fps in 40gr rounds), but this does not necessarily make their wounding capacity more dramatic than M193 or M855 primarily because their penetration depth is much lower.

Hollow-point and ballistic-tip bullets are designed as varmint rounds, to expand quickly, making large, shallow wounds with relatively little penetration. These types of wounds aren't likely to take an attacker out of the fight immediately, especially if you have to shoot through an arm or from the side. Most experts agree that at least 12 inches of penetration is required to reliably reach the vital organs, and most varmint bullets won't penetrate more than 5 to 6 inches. Although some police departments use the Hornady TAP ("Tactical Application Police") round, which is merely a hotter-loaded V-Max varmint round, the primary motivation for adopting this ammo is preventing over-penetration of both bad guys and of interior walls. It should be noted that many of these concerns are proving unfounded as testing on interior penetration is increasingly showing that 5.56 rounds are less of a overpenetration risk than even the 9mm handgun ammo that many departments deploy in submachineguns for interior raids.

The advantage of heavier (64, 69 and 69+ grain) JHP and JSP is that they will exhibit controlled expansion at slower velocities (and therefore have better wounding potential) than FMJ rounds at distance. This really starts to kick in after around 200 meters or so if you are dealing with a 20" barrel. After that distance, most rounds are below the 2500-2700 fragmentation threshold, and though FMJ rounds will tumble, it's not clear that this will be as effective as a good controlled expansion round.

If you plan on using specialty rounds make sure to stick with heavier round. Some specialty rounds that have seen good results in gel, including penetration and fragmentation criteria, include:

In particular 70+ grain rounds often maintain their fragmentation properties far beyond the fragmentation range of M855 and M193. 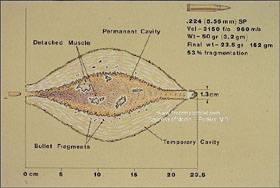 Counter Opinion: Specialty Rounds are the best choice for defensive use.
Specialty rounds have been gaining popularity among police and tactical teams and appear to perform very well. Consider the results of this shooting with Federal 55-grain HP:

When the autopsy was performed, the forensic pathologist was amazed at the degree of internal devastation caused by the .223 round. There was a two-inch void of tissue in the chest, with a literal "snowstorm" of bullet fragments and secondary bone fragments throughout the upper left chest area. The round struck the subject 11 inches below the top of his head and inflicted the following wounds: Penetrated the top of the left lung, left carotid and subclavian arteries. The collar bone and first rib were broken. Cavity measured 5x6 centimeters. What is significant about this "instant one-shot stop" was that the round did not strike the subject at the most effective or optimum angle and did not involve any direct contact with the heart or central nervous system.

75 grain TAP in gelatin. Note that this TAP load uses the 75gr OTM bullet (not the A-Max) and that lighter TAP loads (40-60 grain) use the V-Max bullet and fail to meet penetration minimums