Velocity is only one factor, however important. Bullet construction is another. M193 and M855 fragment because the bullets have thin copper (actually "gilding metal," which is a copper alloy of roughly 90% copper and 10% zinc) jackets that are further weakened by a cannelure. It cannot be assumed that all bullets will fragment, or will fragment at the same velocity.

Many people wrongly assume that any ammo loaded with a 55gr FMJ bullet is the same as M193 ammo. This is false. Unless the ammo meets M193 specs, including both muzzle velocity and bullet construction, it can not be counted on to perform like M193.

Counter Opinion: Fackler's 2700fps rule for M193 is more like 2600fps.
Though the dramatic fragmentation seen over 2700 fps in M193 and M855 is clearly an effective wounding mechanism, the lesser fragmentation seen at 2600 - 2650 fps in M193 is still impressive. Wound channels from rounds at 2650 fps are certainly not as devastating as 2700+ fps but they are still larger than from controlled expansion rounds. Really, we should not be discounting the performance of M193 until its under 2600 fps. This should extend M193 fragmentation standards out to slightly over 200 meters from a 20" barrel and 150-175 meters from a 16" barrel.

A M193 round with cannelure indicated 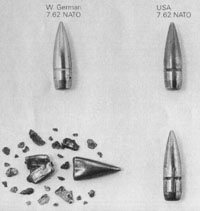 A West German 7.62 round (left) and the American counterpart (right)