What is with this goo and the dings on my Lake City Rounds? What is this discoloration on the necks of my Q3131A? Did someone take a blowtorch to it?

Lake City doesn't bother to polish ammo after it's loaded. Occasionally you'll see dings or excess sealant on the casings of Lake City ammunition, particularly the Federal XM193 that Lake City has produced of late. Sometimes the ammo looks downright beat up. It's generally not anything to be concerned about and shouldn't impact performance. Still, most distributors will offer to take the ammo back if it's in that condition. Check to see if your vendor has a return or satisfaction guaranteed policy if you're really worried about pretty ammo. You can also send it to the AR15.com staff "Ugly Lake City Disposal Facility" and we will be happy to render each and every round safe.

Just about all necked rounds use a heat process called "annealing" to shape the neck of the casing. Producers of military ammo don't bother to spend the extra time and effort in production to polish the brass after annealing, unlike most commercial ammo. The result is that discoloration that makes it look like someone took a blowtorch to the ammo. Don't worry, it won't impact the performance in any way.

Of course, you probably do not want to use ammo that is more severely damaged. Avoid ammo with significant deformities on or above the neck.

AR15.COM user Greenhorn found this round shipped in a new box. The damage on the neck of the case probably makes this dangerous to fire 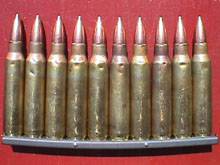 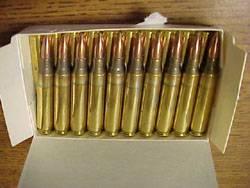