Can I store ammo pre-loaded in magazines for an extended period of time? Won't the magazine springs wear out and cause feeding problems? Shouldn't I rotate my mags?

Shouldn't be a problem;

What wears out springs are cycles of compression and expansion and also over-compression. So, every time you "rotate" your mags, you are causing additional wear by cycling the spring. Loading and unloading magazines will cause more problems than loading and storing them for good. For best results USGI magazines are probably the best bet because many aftermarket magazines use cheap springs.

One AR15.com member reportedly discovered a fully loaded 20 round USGI mag that was loaded in the Vietnam era. 20 some years later it not only functioned fine but continues to do so. Others have reported 1911 mags and Luger mags loaded up since World War II that continued to function perfectly when first fired after 40 years.

When you're ready to pack them away, you can fit 28 loaded USGI 20 round mags in a .50 cal ammo can if you lay them down sideways 4 to a layer. You can also fit 14 USGI 30 rounders this way, with a lot of slack space left over. 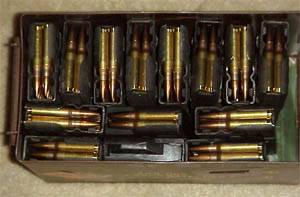 Magazines ready for storage in a .50 ammo can