Many former Eastern-Bloc countries use steel ammo casings in place of brass, as the cost of steel is much less. The steel casings would quickly rust if left untreated, so one of four methods is used to treat the steel cases: "copper-washing," lacquer, "nickel" (really zinc) plating, or most recently, polymer coating. Copper-washed ammo is a blotchy bronze color, and usually the entire loaded round is coated, leaving the bullet and case the same bronzy color. Copper-washed ammo is usually only found in the East-Bloc calibers.

Until recently, lacquered cases were the type most commonly found. The outside of the steel case is covered in a grey or green heat-resistant lacquer to inhibit rust. There have been some problems with the lacquer, though, as it tended to leave drips and runs on the cases, which can make extraction more difficult. Until recently, most Russian and Czech-made ammo used this method.

Recently, the Barnaul plant began offering zinc-plated ammo under the name Silver Bear. Aside from some problems with incorrectly-sized cases, this ammo seems to work well, but the zinc process is more expensive, and as a result, the price of the loaded ammo is a little higher.

Most recently (near the beginning of 2004), Wolf announced that their new ammo would be polymer coated. The polymer process leaves smoother cases than the lacquer, but is much less expensive than the zinc plating. To date, no problems have been encountered as a result of the polymer coating, making the new process an overall success.

There have been problems with steel-cased ammo. Through 2002, Wolf ammo came with a thick red sealant around the primer and on the neck of the bullet. This sealant was the cause of many problems, as it would build up and become sticky under high heat, leading to severe extraction problems as cases would literally be "glued" into the chamber. It would also gum up the firing pin channel and bolt face, causing further problems. Wolf wisely dropped the sealant on their .223 ammo in 2003, and reports of problems have dropped off considerably.

There is still some understandable apprehension with using steel-cased ammo in .223. Unlike the Soviet-designed cases, the 5.56 cartridge has very little taper to the case and its length to diameter ratio is very large. The result of this is that 5.56 ammo has more friction during cartridge extraction and comparatively less extractor surface area. This usually isn't a problem with brass cases, but with steel cases, especially lacquer-coated case, stoppages are more frequent. This is likely to due with the difference in expansion/retraction properties between brass and steel.

These problems aren't limited to .223 either, as some guns, such as the HK USP line of pistols, is notorious for having feeding and extraction problems with steel-cased ammo.

Still, the Russian ammo manufacturers have been steadily improving their products, and many have found that problems experienced with older ammo aren't present in the current offerings. Plus, the competition from this bargain ammo helps keep the cost of all .223/5.56 loads reasonable, which is good for all shooters.

Wolf stinks:
Literally. It smells like ammonia for some reason whenever I shoot the stuff. Additionally, it gums up my AR quite a bit and the steel casings get stuck if I heat my chamber up too much. Even if you've never had a problem with the stuff, why take the chance? Furthermore, there is stuff just as cheap out there, like South African surplus ammo, that doesn't have that vile coating or smell so bad. Oh, and it leaves red flecks of primer sealant all over everything.

Wolf is the best thing since sliced bread:
It's cheap and fun ammo for plinking around. It works fine in my AR, I've never even had a slight problem. More than that it's cheaper than dirt and I have never had any cleaning problems with it, certainly no stuck casings. All that negative stuff is just an urban myth. I don't notice any smell either. Don't like yer Wolf? Send it to me; I'll dispose of it for you. 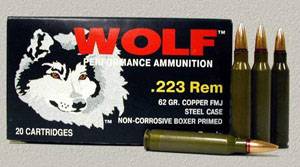 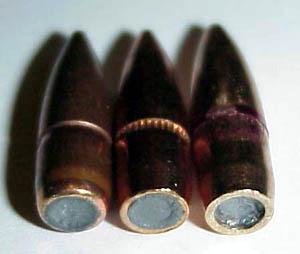