Due to the poor performance of M855 ammunition, particularly in short-barreled carbines of 10.5-14.5" in length, Navy SEALs, and eventually other SOCOM units, began experimenting with using loads originally designed for marksmanship units for combat. It was soon discovered that while these loads were both very accurate and had excellent terminal ballistics even from short barrels, the loads weren't quite ideal for combat. The target bullets had no cannelure, and the bullets weren't crimped in place, which could allow bullet set-back during feeding and raise chamber pressures to dangerous levels. Further, most loads were of somewhat mild velocities, as the load was chosen with accuracy, not terminal ballistics, in mind.

Sierra was asked to produce a bullet cannelured version, but they intially refused.

Nosler did not have any problems putting a cannelure on their 77 gr bullet. Black Hills Ammunition was approached to make a slightly modified version of these loads for combat use. A cannelure was specified, the bullets were to be crimped, and the load was to be up to military chamber pressures, with maximum safe velocity being desired. The primers were to be crimped and sealed, and of course, overall length had allow for loading in standard magazines.

The Marines (in conjunction with a large Federal LE agency) did extensive testing of this large experimental batch of BH loaded Nosler 77 gr cannelured OTM's in the Fall of 2002. It offered outstanding terminal performance out to the maximum test distance of 300 yards. They then ordered 1.1 million rounds of cannelured 77 gr OTM's via the existing Mk262 SOCOM contract (which did not specify a manufacturer) administered through Crane. The cannelured 77 gr load was designated Mk262 Mod 1, and the orginal Mk262 was re-designated Mk262 Mod 0. 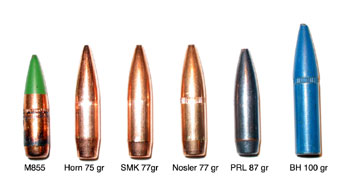 According to one observer: "At this point bureaucracy, nepostism, and capitalism converged. Sierra realized they were about to lose a VERY LARGE contract and suddenly they agreed to make the 77 gr SMK with a cannelure. Crane pushed for Sierra to get the contract over Nosler, although the Nosler offered better terminal performance. On the other hand, in all fairness, the Sierra bullet was slightly more accurate out of government test barrels than the Nosler--both shoot nearly the same out of real rifles, such as the by then type classified Mk12 SPR."

Therefore, while a few hundred-thousand rounds of 77 gr Nosler OTM was manufactured and used primarily for testing, the cannelured 77 gr SMK was used in the the multi-million round contract for the Mk262 Mod 1.

Recently, Sierra agreed to add a minimal crimp to their bullet, and this has since replaced the Nosler bullet in the current versions of Mk262 Mod1. As of April 2004, Mk 262 Mod1 has seen extensive use in Afghanistan and Iraq, in carbines with barrels as short as 10.5", and has proven to be very effective at ranges that M855 is woefully inadequate from the same weapons. It is also commonly used in the Army's "Special Purpose Rifles" (SPRs), which are accurized 18"-barreled rifles used by soldiers with additional combat marksmanship training in a squad sharp-shooter role.