How do I store ammo properly?

The three primary killers of ammo are heat, moisture, and chemicals. Excessive heat will break down both the powder and the primer compound over time, causing erratic ignition and velocities. Moisture will corrode the casings and can also affect the powder and primer if the round isn't properly sealed. Likewise, oil, powder and copper solvent, cleaners and other gun-related chemicals can penetrate and damage ammo that isn't sealed properly. Very cold temperatures won't really effect ammo but temperature changes that can cause condensation are a big no-no.

The best method of long-term storage is to use surplus military ammo cans. These are tough, airtight and come in a variety of sizes and have the virtue of being designed, surprise, to hold ammo. A small desiccant pack can be added to remove any excess moisture from the can. Once sealed, the can should remain closed (or the desiccant pack replaced) until the ammo is needed. The sealed ammo can should be stored in a cool, dry place that is not subject to wide swings in temperature over short periods of time (which can cause condensation). Ammo stored this way will last several (4 or more) decades.

Some of the real "gurus" will tell you to pack your ammo on stripper clips in bandoleers and in ammo cans with desiccant. If you need to deploy the ammo quickly it is dry, packed and ready to be carried on the go. The best method seems to be using 7 pocket bandoleers in a .50 ammo can as shown below:

Loaded bandoleer ready to go. 3 clips in each pocket for 210 rounds per bandoleer

Despite the fact they are designed for only two, you can easily remove the cardboard and put 3 stripper clips in each pocket with no ill effects (they don't rattle and seem to come out in a hurry just fine too) and get 4 bandoleers or 840 rounds in a .50 cal ammo box this way. Be aware that each of these cans will weigh about 28 pounds.

Packing instead in .30 cal cans will let you store 2 bandoleers in each can for 420 rounds per can. 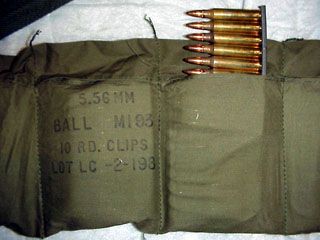 Stripper clips in a 7 pocket bandoleer (close up) 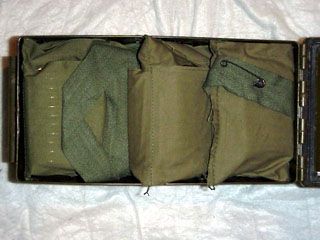 Four (4) seven pocket bandoleers in a .50 cal ammo can