[ARCHIVED THREAD] - My Knock-off of Serbu's GB22 (Simple Homemade Gun)
If you haven't seen these yet, Mark's concept started as $10 and 3 hours of time, make a gun in your garage with simple tools then trade it into one of the local gun buy back programs.  This is to prove many points, the buy backs don't get guns off the street, its a waste of public resources, they can't stop people from owning guns, and you CAN make a gun that works.  Even with simple tools.  The key is his very simple design.

So, I didn't buy his plans nor did I research how he did it anything beyond my head turning after seeing a video.  The result is a poorly planned, crudely executed version of Mark's design.  Unless you enjoy learning the hard way, I suggest buying his plans.  I think they're like $12.

Yes I have a mill, I have a lathe, but I didn't use them.  The most expensive tool I used was a $100 drill press and that could have been done just as well with a hand drill.  The majority of the work was done with Harbor Freight right angle grinders, a hacksaw and files.  Hence the crude results.

Cleaning up the edges

Time to get to work

Roughing out the "Action"

Starting to get the idea

Trimming the "Bolt"  Little trick to keep from rocking the file, don't hold the file.

Fitting the “Bolt” or center piece of the “slide”

Gutting the “Bolt” for springs

Guide pins for the springs, I have since eliminated one spring

Need a recess for the rim

A little off center, but that’s how it goes with crude tooling sometimes…


Barrel block rough cut, I opted to use a solid block of 5/8" scrap I had laying around


Cutting slots for the “frame”.  I used a cut off wheel in the grinder to rough it, then a file to clean it up.


Slots done, time to drill it for the liner.  This is one of the mago components that keeps it from being some illegal weapon, ie zipgun


Soldered in a barrel liner


Still have to make some grips

Got some time applied to the grips


I tried some oxo cold blue, had rubbed just to see how the junk steel will take the color.  It didn't come out well in the pictures, but the color while far from perfect was much better than I'd expected.  The plan, for now until it changes, is to sand blast, then bead blast, then hand rub more cold blue.  I've only ever cold blued small parts, some new some old, but always small.  I usually hit them with the heat gun or torch just until you can see the moisture escape, then start rubbing or if they are small enough, just drop em in.  I'll be interested to see how this comes out.
Cold bluing teaser.


Ha, I said "might".  Lots of grinding and filing.  Fixed the bottom barrel block to slide lines too. 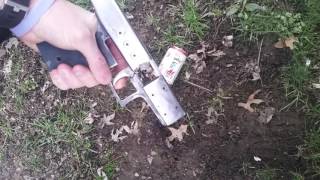 
Adding Mark's video to get your creative wheels turning.