General » General Discussion
A gentleman I know bought himself a very rare and very cool new toy! (Page 1 of 3)
I have posted some cool photos of some of his toys while visiting with him and his wife in the past.  Its time for another road trip soon me thinks.


Seems Ron bought himself an A6M3 Zero to toodle around in. 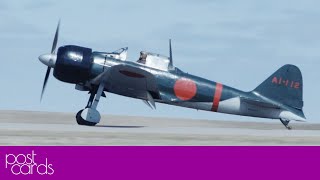 A gentleman I know bought himself a very rare and very cool new toy! (Page 1 of 3)