[ARCHIVED THREAD] - How to clean up double barrel muzzle?
So I have this rescued LeFever Nitro Special I've been working on, PO said it was having light primer strikes and firing both barrels when it shouldn't. Tore it down for a clean'n'lube. Quite the pain to put some of those springs back in, but it feels a lot smoother now. Put on a new bead too. Still need to test fire it. The barrels had been cut down to 18.5"(yes I checked) with a hacksaw, and wasn't cleaned up after. I've been working on trying to even up the muzzle face slowly with a file while trying to keep as much metal as possible, so far just taken down a few high spots. When I finish up that part, there is a gap between the barrels. I'm wondering what the best way to plug that hole is. I've never handled a double barrel shotgun before, so I don't have much to go on, I would imagine that there is usually some sort of filler material soldered in there on a normally finished gun. What would the preferred method be? What's going to be the easiest and cheapest way to finish up a $100 shotgun?
Pic of muzzle: 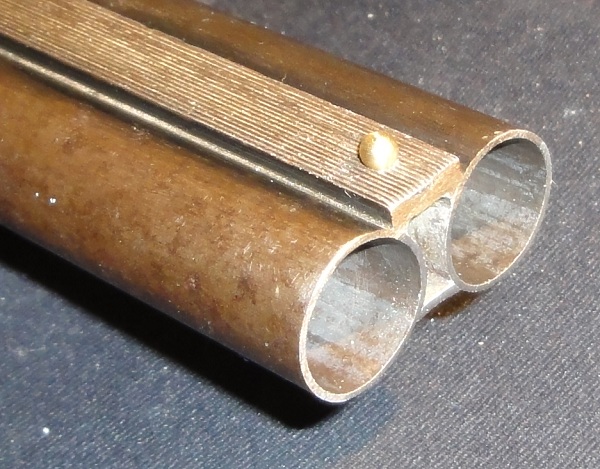 Pic of annoying top lever spring(with the threaded peg behind it) and dremeled Harbor Freight clamp to reinstall it: 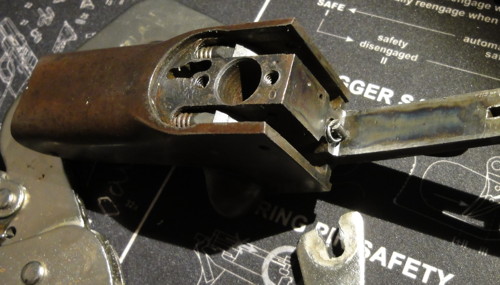 [ARCHIVED THREAD] - How to clean up double barrel muzzle?