[UPDATED] Top Gun Rights Issues (Chipman & ATF Reclassification & Braces)
6/6/2021 7:14:27 PM
Evening Hog Hunt Success
Finished dinner and with the kitchen cleaned, I got a pass from the old lady to hit the field this evening for a last-minute hog hunt. I have been watching two specific groups and figured they would be in a certain location so I grabbed my .300 BO and about fifteen rounds of ammo and headed out the door... a suppressed home build that's been 100% with everything I've fed it. Todays ammo was subsonic hand loaded 220gr Nosler CC's pushed by 8.6grs AA#9. I keep shots within 75 yards. 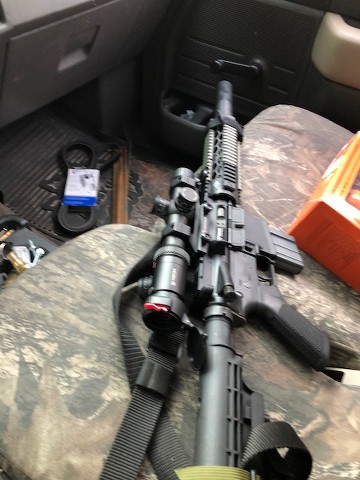 Upon arrival at the ranch the first group I had been watching was no where to be seen so I headed south on the main road towards a field where the second target group was suspected to be. Yep... they were there and apparently did not like my truck and they started to gather and move north west. I knew they were headed to for the woods where they would cross an old grown up road to make it to another field. Fortunately the entrance road took me to that old road.

I got out and quickly but quietly moved north hoping to cut them off but as I made my way to where the road comes out to the second field I realized they had already crossed. I then saw a group, most likely the same group, moving north coming out of the woods and cutting across the field to my left. There were several oak heads that were between me and the hogs and I was able to use them to mask my movements. I got within about 75 yards and shot two hogs, one was DRT, the other one was grounded but twitched for a few minutes. 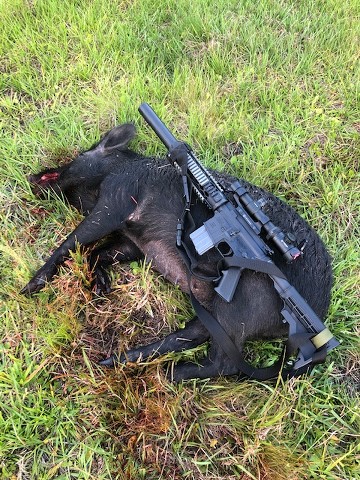 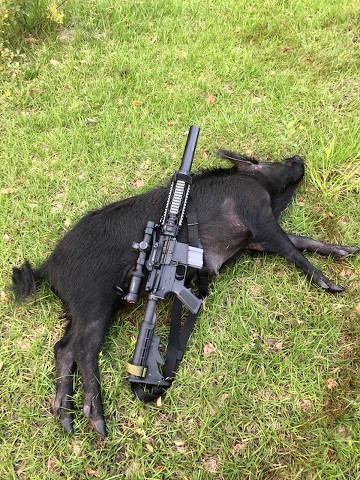 I gathered up my empties and moved north to see if any more were off to the east in the field I initially saw the group in... and sure as shit, there was another group moving towards me. I used the woods to mask my stalk and moved another 75 yards or so north and waited for the group to enter the field. When they did, I shot one and it dropped like rock... DRT. The others ran northwest and I did not shoot. 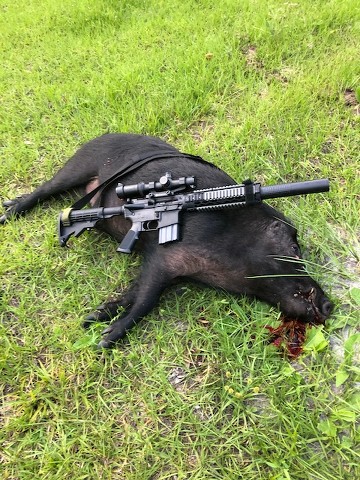 I headed back out the main road and stopped short of the highway and decided to do a short walk before it got dark. I was cutting across a field headed west with woods about 75 yards to my left. I looked to my left and at the edge of the woods I could see a black blob... I went prone and sure enough it was a hog. He turned broadside and I shot... I heard the impact and he went into the woods. I continued west about 50-60 yards to a gap in the woods that lead to another field and saw hogs to my left heading west... I assume the one I just shot was with them.

I moved towards the area where they were coming out of the woods hoping to catch tail-end Charlie.... I waited a few minutes but no more hogs. I moved a little closer to the area where they had come out of the woods and damned if I didn't see this guy just inside the wood line lying dead on the trail the aforementioned hogs just used... turns out he was with those hogs and was most likely the lead element. Had I not moved in that direction I never would have found him. 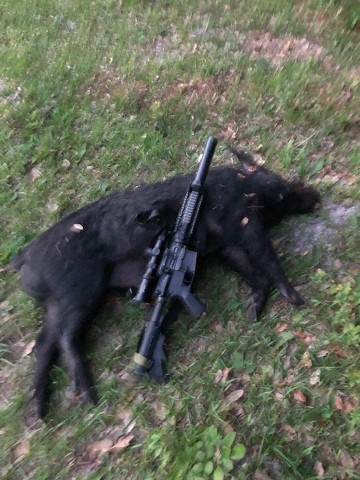 All in all a quick but quite successful evening hunt.