I had some questions a few months ago about this West German proofed 220 I picked up, the link below is very informative regarding German and West German 220's

Great read. He is certainly a wealth of knowledge.

" Sweet is War to those who've never experienced it "
Thanks for posting OP.  Saved those links for later.
"Freedom is a light for which many men have died in darkness".
George Washington

thanks for posting!
The American Government is like a Tijuana Donkey Show. You can't believe what's going on, but you can't look away.

" Sweet is War to those who've never experienced it "
The German made SIG Sauer pistols had a slide made from a carbon steel flat.

Then the flat was pressed into shape over a mandrel in a large hydraulic press.

This is what they look like after the press.

Then the ejection port is milled out.

Next a front end piece is welded on.

They are proofed at the factory in this room in the basement. They are fired twice with 30% overpressured rounds to test that they are safe to rife as per German law.

here is one of the fixtures they are proof fired in.

This is not to be confused with the test firing done by the German factory to make sure they shoot accurately and function properly. That is done in this room down the hall from the proofing room.

They are fired 5 times at a paper target 25 meters away. This test target is shipped with the pistols made in Germany.

The shooters only rest the butt of the grip on a padded wooden block and the forward part of the frame in a noth at the bottom of the cutout in a wooden door that slides down. 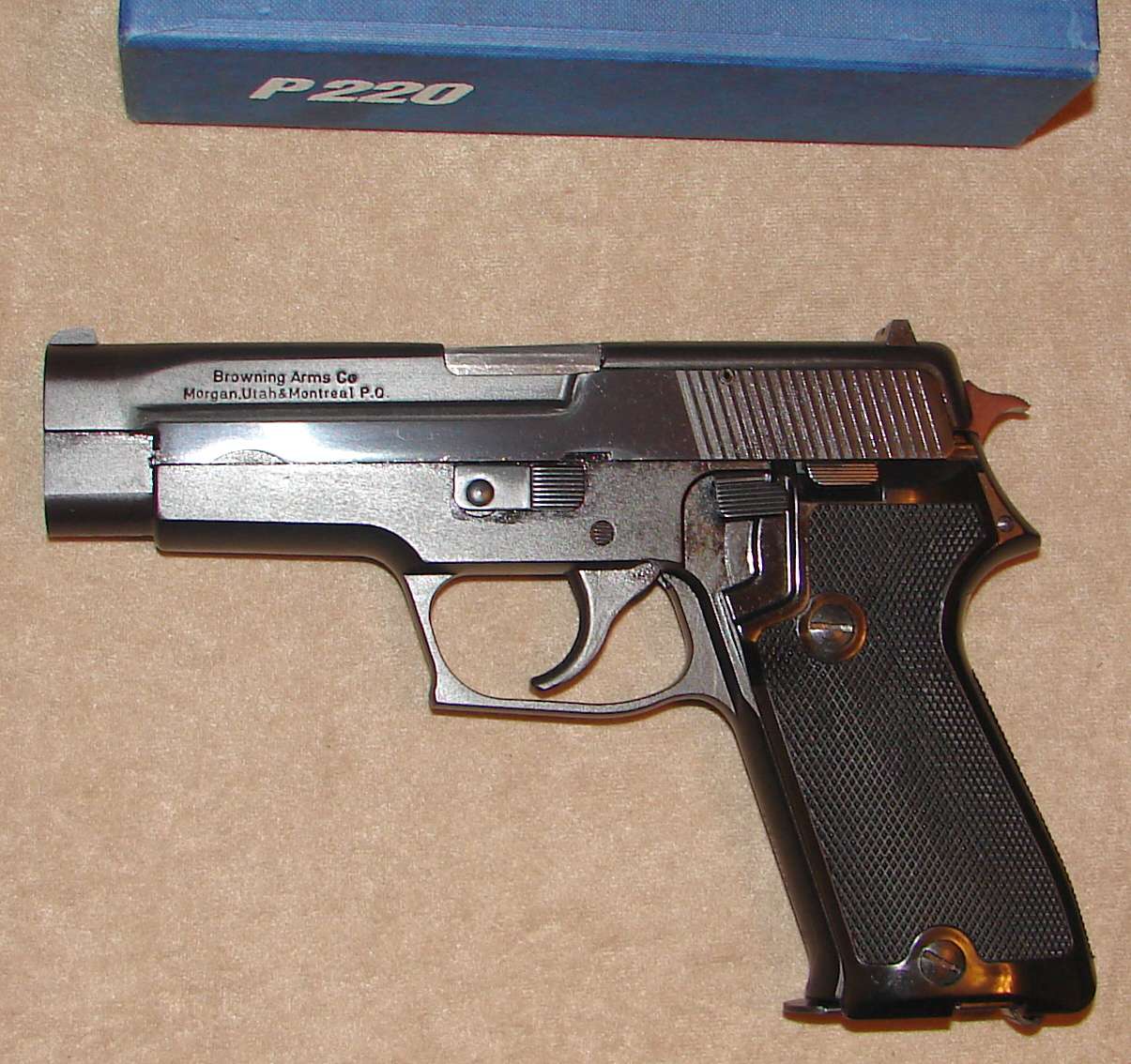 Later they looked more like the current ones but the top corners of the rear half of the slide had beveled edges rather than the rounded corners they have now. "The United States has an obligation to its citizens and to the people of the world, never to let those who would destroy freedom dictate the future course of life on this planet." -Ronald Regan
Excellent info and pics C_Swimm  thank you !
" Sweet is War to those who've never experienced it "
C_Swimm:  Do you know what welding process was used to affix the bushing to the slide?  It looks like either capacitance discharge welding or possibly friction welding.  The bead doesn't really look like a vibration/friction expulsion though.
"I'm just an innocent, moon hillbilly!!!"
Sorry I do not know. It was a few years ago, and I don't think I thought to ask at the time.

Of course this is just on the stamped steel slides. All the newer stainless slide versions are CNC machined from solid bar stock.
--------------------
Chris

"The United States has an obligation to its citizens and to the people of the world, never to let those who would destroy freedom dictate the future course of life on this planet." -Ronald Regan
I find the older p220 and p226 to be better balanced  than the new ones . Not that the new ones are bad , but I prefer the look, and feel of the folded sheet mtl slide p220 and p226 .

"The United States has an obligation to its citizens and to the people of the world, never to let those who would destroy freedom dictate the future course of life on this planet." -Ronald Regan
agree, only two pistols fit my hand perfectly, the SIG 220 and the 1911

" Sweet is War to those who've never experienced it "
Since the year 2000 SIG Sauer in Eckernförde has changed a lot, the rifle production went to Isny and with the loss of the export permit the staff was reduced from about 200 to 50 now.

I just received an official notice from the Eichdirektion Nord this week that the proofhouse in the basment of the factory will be closed in October 2017. It stated the the number of proofed guns is in no relation to the cost anymore.

" Sweet is War to those who've never experienced it "
Some great info and good reads!
Thanks for all who posted!
BLACK RIVER MAFIA
I have learned a lot about Sigs I purchased back in the 80's.  Thanks.

I have 2 220's. One a 9mm made in 1976. I have not fired it because it is in mint condition. Imported by Hawes in Los Angeles. Really a neat import logo. The other one is a 38 super made in 1996 with the American mag release. I believe this was the last year for the 38 super in a 220. It surprises me to learn the number of gun people that do not know that 220's were made in calibers other than 45acp. Wish I had one in 7.65 mm but that is just wishful thinking.

Some pretty good info in the link in the OP.

I knew my Sigs were old and made in Germany but I guess I hadn't paid enough attention to notice that there was a difference between "Made in W Germany" and "Made in Germany".

I just checked my Sigs and all say Made in W Germany.
Anytime someone starts with "I support the 2nd and own guns myself but..." it is code for I mean the exact opposite and now I'm going to say something stupid and untrue.
Where’s the love anymore for my beloved P220’s!.....


the only question I have is the west german one worth the extra?

I am not really interested in  rails etc.. would prefer older


years to stay away from?

years to gravitate to?