The SCAR MREX (Modular Receiver Extension) has successfully served the shooting community and Special Operations units in combat for years. The MREX has made the SCAR 16 and 17 a more versatile modular platform, accommodating a variety of accessories with M-Lok, direct mount, and picatinny mounting options. The MREX greatly improves the shooting ergonomics and balance of the SCAR rifle. Over the years, KDG, creator of the MREX, has been listening to the needs of both commercial and military customers, tallying the most important desired features to incorporate into the MREX MKII. Enhancements include M-LOK mounting slots along the entire length of the handguard, including at the 2 and 10 o'clock postions. The full length Picatinny top rail has been replaced on the MKII with M-LOK slots for more mounting options. This model extends 2.2" beyond the SCAR upper receiver, and is ideal for use with shorter barrel lengths or if the user is looking to add M-LOK modularity to their rifle without having a rail that extends beyond the gas block. Fits both SCAR 16S and 17S models. 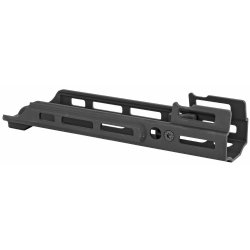