Depth Perception, Stereoscopic Visual Cues, and Binocular, Monocular, and Biocular NVGs
Given the frequency with which we field questions, here on the forum as well as via phone and e-mail, I thought it might be worth posting this simple illustration and explanation of binocular disparity/parallax, and how it relates to depth perception and NVGs.

There’s a lot of variations on the question, but the crux of all of them pretty much end up being “why are Binocular Night Vision Goggles (BNVGs) better than/more expensive than other options?”

Note: this is not meant to try to convince anyone that they need to buy BNVGs and that monoculars or bioculars will get you “killt in da streetz,” but rather an acknowledgement that both the difference in cost and the fact that so many professional end users and trainers use and advocate the use of BNVGs warrants at least some explanation of why they’re better.

The common answer typically tends to be that BNVGs provide better depth perception, which then also translates to improved situational awareness, and allows end-users to move more quickly and more safely (important when operating vehicles and/or aircraft, as well as more “dynamic” dismounted activities). BNVGs also reduce user fatigue, allowing them to be worn longer, both in terms of overall duration, and the amount of time between when you need to give your eyes and a brain a “break.”

Going into a little bit more detail, the primary mechanism by which BNVGs accomplish pretty much all of these is related to stereoscopic visual cues—our brains and bodies have evolved to use stereoscopic vision, common amongst active predators throughout nature.

One of the main stereoscopic cues is binocular disparity, illustrated here in a very simplified form: 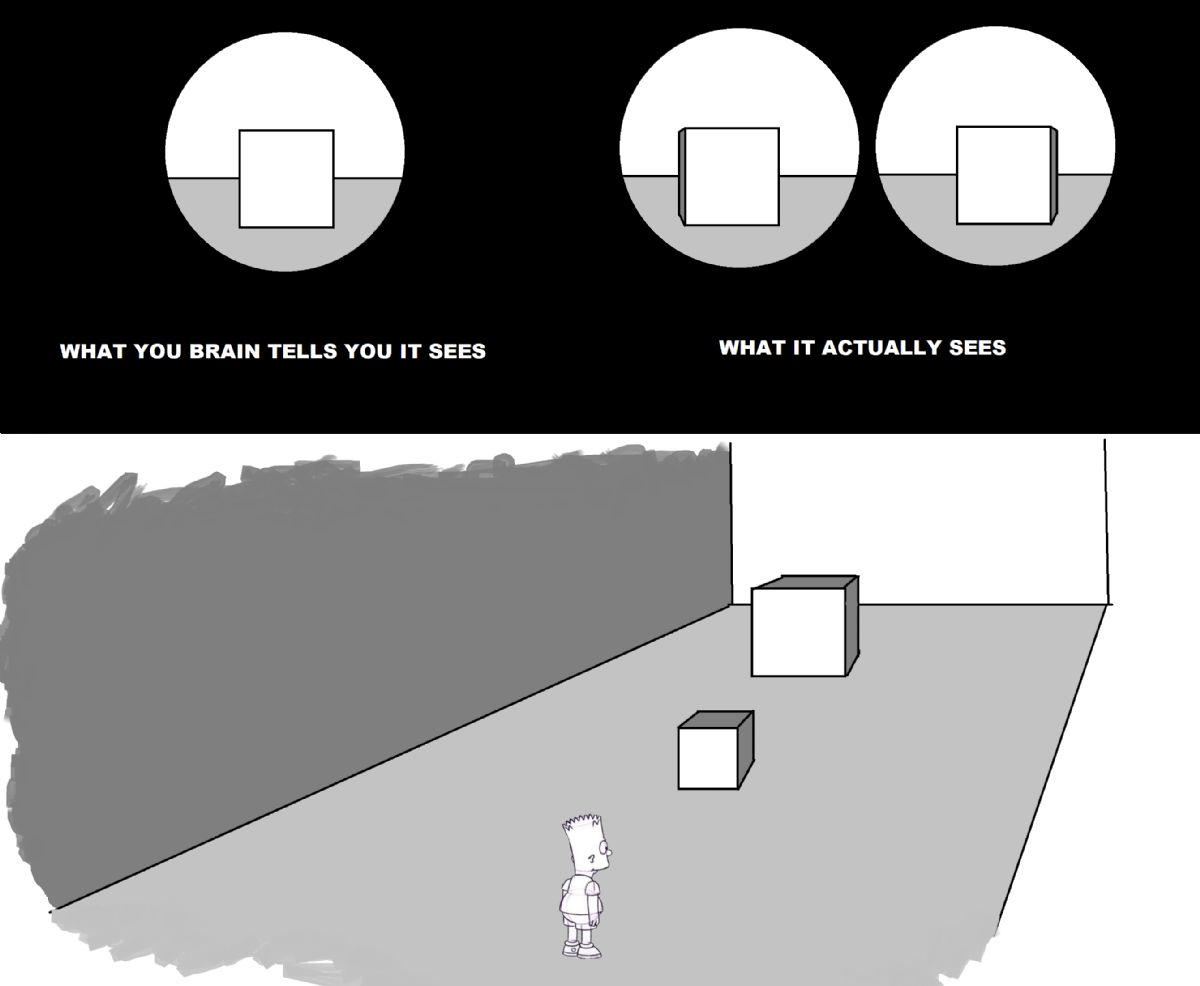 Simply put, your two eyes provide slightly different angles of objects that you observe in three-dimensional space. Based on the amount of disparity between the two angles on an object, your brain can then unconsciously judge the distance from you to a given object or obstacle with a fairly high degree of accuracy, especially if you are familiar with the object or type of object (e.g., a couch or a coffee table) and its nominal dimensions—or if there are other familiar objects around it (e.g., tree trunks). The greater the disparity, the closer the object/obstacle, allowing you to distinguish between a small object nearby, or a large object in the distance, as illustrated in the bottom half of the image. Moreover these cues are not dependent on objects/obstacles being in focus.

Optical illusions like 3D images or stereograms (“Magic Eye”), and/or forced perspective scenes use binocular disparity to “trick” your eyes and brain into seeing (or in the case of some forced perspectives, not seeing) depth accurately—in fact, you can actually “see” stereograms through BNVGs, thanks to the proper translation of binocular disparity.

Binocular disparity is one of the primary components of depth perception and stereoscopic vision, allowing you to proper gauge distance and relative size, making it extremely important while moving, especially at high speeds and over unfamiliar terrain/environments.

This is why manual gain is considered so important in monocular night vision devices, while being less so in BNVGs—if the difference between your aided and unaided eye is too great, your brain can “turn off” your other eye, preventing you from “seeing” and processing supplementary information being provided by the unaided eye. Therefore the ability to dim the aided eye to better “equalize” the inputs from your two eyes can be extremely important. With a BNVG, since both aided eyes will have equal or close to equal inputs to provide stereoscopic visual cues, manual gain control tends to be considered less important with BNVGs.

Moreover—this is why monocular night vision devices by far require the most training and practice to learn to use effectively, and why many novice users find biocular devices like the AN/PVS-7 family to initially be “more comfortable” and easier to use.

On the other hand, biocular devices, as a function of their design and operation CANNOT provide binocular disparity, as a single image from a single image intensifier tube is being projected into both eyes.

In doing so, biocular devices “trick” your brain into thinking you still have stereoscopic vision, making you “feel” more comfortable, simultaneously making you more confident, when you are in fact less able to accurately judge distances, making them a greater liability.

The element of “comfort” provided by the biocular image has often times caused them to be “preferred” and recommended for vehicle drivers, however, IMHO, this is a mistake—as the “preference” of many novice night vision drivers for the AN/PVS-7D has everything to do with psychological factors, but actually provides poorer potential depth perception than the AN/PVS-14–shameless plug, but this was one of the main driving reasons behind the development of the TNV/PVS-14-PBM-A, to provide conventional military drivers without access to BNVGs with a binocular capability.

Furthermore, stereoscopic visual cues also help to explain some of the importance behind proper collimation and interpupillary distance (IPD) adjustments:

This is also in part why boresighted and collimated devices like Clip-On Night Vision Devices (CNVDs) are so much more expensive and complex than normal NVGs (the catadioptric lens assembly is another big part—but that is a topic for another time). It’s worth noting that the acceptable image shift tolerance for an MX-11769 image intensifier is about three times that of an MX-10160 “aviation” style image intensifier, and hence why we prefer not to perform tube “conversions,” even with L3Harris image intensifiers with removable EGACs, they’re “out of spec” for most binocular devices, and much harder, if not impossible to collimate properly in a binocular system.

Can you use an uncollimated or poorly collimated BNVG? Sure, and it’s better than a monocular or a biocular, however it’s still not ideal, and not the same as a properly collimated set of dedicated BNVGs.

At the same time, for aviation applications, both the U.S. military and FAA require extremely strict inspection standards to ensure that BNVGs are within tolerances, as a minor misjudgment in an aircraft can have catastrophic results.

When learning to use BNVGs, to a certain extent your brain has to “re-learn” the relationship between your left and right eye to give you the most accurate and reliable information, especially when combined with the image shift induced by the image intensifier tube, which is ultimately almost impossible to reduce to zero—hence why there is an acceptable and unacceptable tolerance.

A non-repeatable, non-precise IPD can have an effect on binocular disparity, especially when coupled with image shift in the tube—the affect may be minor, but it’s there.

Again, this is the reason that despite the increasing popularity of articulating goggles for ground applications, almost all aviation goggles utilize a fixed bridge system with precise and repeatable IPD adjustments—at very least with a fixed bridge, the image shift effects are limited to the horizontal plane, rather than an offset rotating axis relative to one another with an articulating goggle design.

That being said, this is not meant to be interpreted that articulating goggle designs are terrible and you shouldn’t use them—there are some benefits to articulating goggle designs, otherwise they would not be so popular, however, in keeping with our mission of education and providing information to all potential end-users, it is worth discussing the potential pros and cons of certain configurations and design philosophies and understanding the benefits and limitations of each.

The reality is that in many situations and to many end-users, the differences between these minor factors may not make any practical difference at all—and the vast number of goggles out there that have been built without proper collimation can certainly attest to that—however, this does not change the fact that there are right and wrong ways of doing things, and better and worse approaches, nor does it foreclose on the possibility of minor issues “stacking” to create a bigger problem.

Your eyes and brain have evolved to operate a certain way—and while modern NVGs can’t exactly replicate our natural vision, properly built and configured BNVGs tend to get the closest, meaning that they are more “natural” to use, and therefore more comfortable to use for prolonged periods of time.

The more deviations from “perfect,” the more your brain needs to work “overtime” to process the inputs and resolve them into useable information, which ultimately leads to user fatigue.

With bridged monoculars or an uncollimated and/or improperly adjusted BNVG, your brain can resolve stereoscopic visual cues, but will have to work harder to do so, leading to accelerated fatigue compared to wearing dedicated BNVGs.

With a single monocular, you can get a degraded version of the stereoscopic visual cues, but you will fatigue much more quickly as your brain strains to resolve the widely disparate information it’s receiving from your two eyes.

With a biocular, you will probably experience less fatigue and be much more comfortable—arguably even more comfortable than with a BNVG, as you’re not experiencing the disparate shift from two different tubes, however you will not have any stereoscopic visual cues making you less capable of accurately judging distance and depth.

P.S. often people will recommend the purchase of a “low cost” PVS-7 as opposed to a PVS-14 as a way to “get in to” night vision. This is not bad advice, and I’ve given this advice to more than one person in the past, because having night vision is infinitely better than not having night vision.

However, it’s worth noting that the only reason that PVS-7s are so “cheap,” is not because they’re inherently cheaper to produce—in fact they are much more complex and difficult to assemble than a simple monocular system, with prisms and 50% more optics (eyepiece assemblies) than a monocular—the image intensifier price is about the same, but simply put, because very few people want them.

The “new” price of a biocular device to manufacture or assemble is actually higher than a monocular, they’re sold cheap because otherwise nobody would buy them.

Okay, that’s what I’ve got for now.