Vortex SPARC Review (Page 1 of 4)
I first noted the SPARC in my Gamechangers SHOT 2010 thread.  for everything that Vortex claims about this optic it is a make or break item.

First thing I did was full up a big tub with 12-18 gallons-enough to get it 13" deep is a tub about 2 feet long...6 hours later it was still kicking

Well, that annoyed me; so I went outside and threw the optic as far up as I could three times; letting it hit the ground each time, then I remembered I needed to check the pitch of my roof, so I threw it up then and let it roll down.

Well I woke up the SPARC

and the little SPARC was still rolling-by the morning, the 6 hour turn off worked, so I turned it on, it fired right up.

I figured it liked the cold so much it could hang with the mixed peas for the morning-that's right I froze it in the deep freeze.

After it stuck to my tongue, I decided we were done with water tests for a while.

It's time to shoot the thing, so I mounted up the SPARC on my BCM and headed to Knob Creek.    It took me longer to sight it in than expected.  This was my fault as I wasn't quick to realize that instead of moving the reticle to point of impact, with the SPARC  you move the POI to the dot (If your hitting low, turn "up" instead of "down").  But after it was on. IT WAS ON!!.  I was popping golfballs at 50yrds, and making three leaf clovers at 30yrds.

At this point my mind was made up.  For the AR15, an optic that is 2 MOA comes with a doubler, three mounts and a lifetime warranty for $200 is pure win for the hobbyist in me.

But that's not the end of the claims for the SPARC , See, the SPARC is marketed and priced to make a strong entry in the median market.  It's priced to be an option for just about every AR shooter.  This optic is poised to be affordable enough to appeal to new shooters, yet of such quality that one could depend on it in the clutch; from survivalist to LE needs on a personal rifle.  Because of this there were some more tests that needed to be done.

Thanks to a fellow member, I was able to test the NV setting.  The dot was clear and precise.  The pic is not excitingly cool, but it does best represent what the reticle looks like, what this pic does not represent is the full field of view that night vision provides. 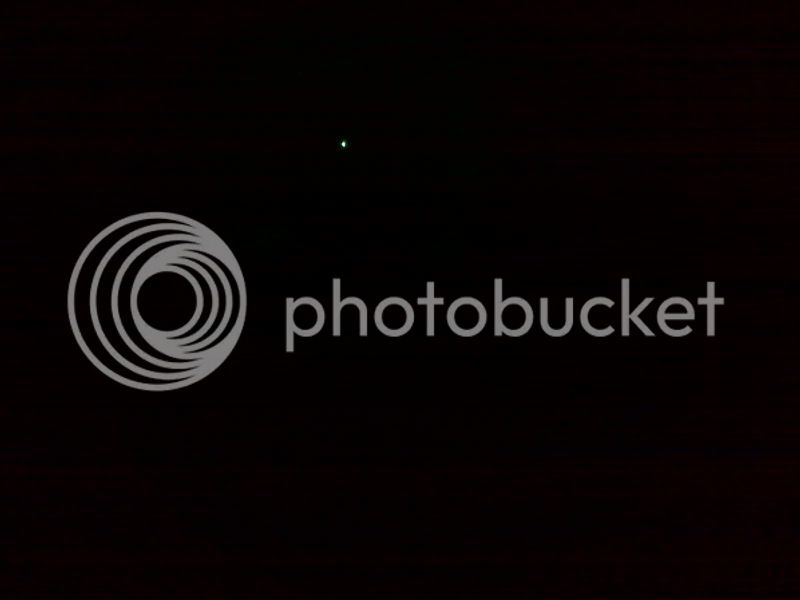 So I banged on it with the rubber mallet-not to kill it, but to throw it off.  I banged on the mount and the optic a bit, and then emptied a mag.  It was still on.


I also wanted to evaluate the mount options.  The factory mount is GTG for the hobbyist who will leave the optic on one weapon. However, professionals talk QD, and QD means Larue.  So I placed an order for the LT660 tall which ended up being about .6" too tall, not only does it not provide co-witness, I couldn't see the FSP at all. The reason for this is that the illumination element on the SPARC is on the bottom of the interior of the tube-thus it blocks field if view, here are the factory mounts next to the 660 tall, and a pic through the rear sight

After replacing it with the LT660HK, I was much happier,  and had absolute cowitness at the same height as the factory mount––

The SPARC made a visit to the KY Hometown shoot where it rode  several ARs,  AK's (on the gas tube-IT GOT HOT), and a .50 Beowulf.  I also had to rezero on the new mount while at the shoot-which took about a mag This was at 35 yards-the top right is before zero...and I had a pack of 4 that wanted the same hole

After it was zeroed it rode the aforementioned setups.  I did have one AR user note that when fired, the dot dimmed.  After it rode the .50, I ran a mag through it and it went off.  I replaced the battery (The same one  had been in the optic since test day one [well over a month] and freezing the battery plays into battery life strongly.), and never had a hiccup the rest of the day.   I will do some more big bore test on it, ( I thought I could get more in at the shoot-but didn't

) and get that to y'all as time allows.  Thanks to Larue Tactical it always returned to zero on my rifle.

Bottom line is this is a great little optic.  Vortex isn't looking to get a military contract with it, but rather to offer a nice budget setup you can depend on.  They do that.  The optic endured quite a bit, and kept going.  I really like using the double-even with irons.  You can pre order the SPARC from SWFA and Midway.

I lost the bikini cover that came with the optic pretty quickly fortunately for me Butler Creek #4 OBJ  work great on the SPARC.

Thanks to Vortex Optics for allowing this review.  Larue for a sweet mount, BCM for a great rifle, and Sweepea the dog for being a constant support during the ebb and flows of this review.

Please post review questions AT THIS LINK  so I can filter my answers Thanks!