On 2/20/2019, around 6:00PM CST the Oregon City Police Department posted on their Facebook page the following: 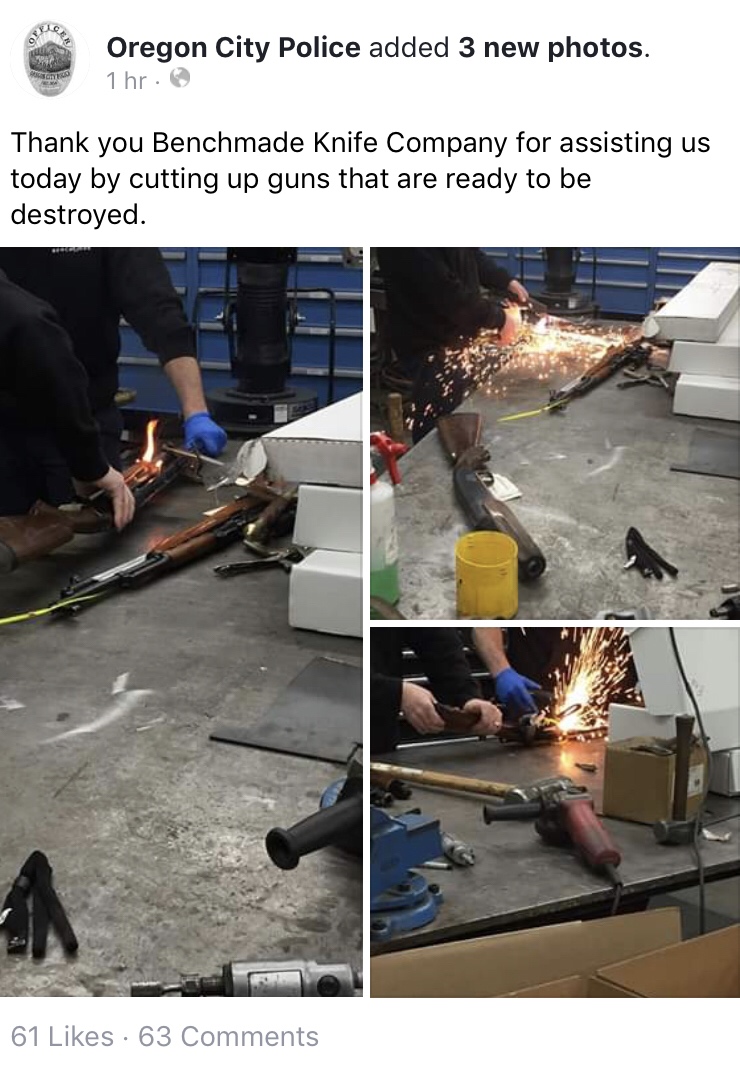 This almost immediately triggered a response in Benchmade owners, many or most of which are ardent RKBA supporters, to begin questioning why Benchmade would willingly participate in the destruction of guns.  There was no real description by OCPD of why the guns "needed" to be destroyed.  The simple fact that OCPD posted this activity on Facebook means that they saw the destruction of firearms to be a good thing, and likely result in positive PR response.  Only leftists who hate guns think this way, and because of that, people began digging into Benchmade's campaign donation history using OpenSecrets.org. 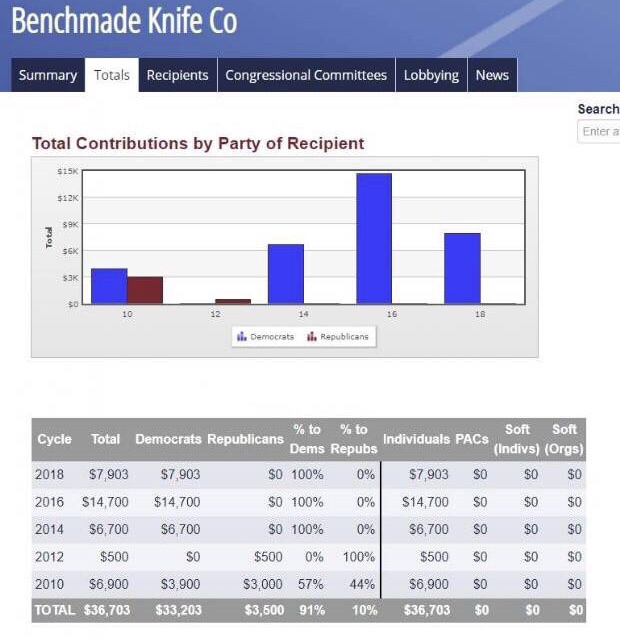 OpenSecrets shows that not only have Les De Asis and Roberta De Asis (owners, son Jon De Asis is current President, Les remains CEO and chairman)  but Benchmade Knife Co itself have donated significant amounts of money to anti-gun Democrat campaigns over the years totaling $33,203.  While one of these Democrats, Kurt Schrader, doesn't appear to be anti-gun, the rest of the candidates fall into the category of being positively anti-gun, promoting, promising, and in some cases voting for and passing bump stock bans, high capacity magazine bans, etc.

Also noteworthy is that these donations are not limited to Oregon elected officials, but include New Mexico, Colorado, and Massachusetts campaigns.

(Note: Those who visit OpenSecrets.org to verify on their own, take notice that there is a $1.2 million dollar figure floating around as well.  This is the tallied amount of dollars spend by Benchmade on lobbyist activity, and not campaign contributions.  Further investigation is required to determine what exactly those lobbying dollars were spent on.)

Another question for BenchmadeWhy then, do you explicitly state on your website that you do not support individuals or political campaigns?

This of course ignited a Dicks-Zumboesque shitstorm of epic proportions.  For about 6 hours Benchmade remained silent while thousands and thousands of comments poured in via Twitter, Facebook and Instagram, as well as on various forums.  At 12:22 AM CST, Benchmade posted the following official response in their Bladeforums Industry Forum:

This impotent response had the opposite effect intended, as if anything, fervor on social media and the forums increased.  Again, note the very careful wording of the above statement.  Benchmade assisted OCPD in executing OCPD policy.  At the end, they mention ORS, Oregon Statute, but again, executing policy in accordance to ORS.  The Chief of OCPD concludes with "The Oregon City Police Department does not sell firearms."

Well, only because you don't say so Chief.  Not because of court orders or ORS.

The court is obligated to order weapons used or available to use during the commission of a criminal offense to be forfeited.  Not destroyed.  The Law Enforcement Agency that seized the firearm chooses how to disposition it. OCPD Chief Jim Brand chooses to destroy them all.  Again, he obviously considers that choice to be a positive one worthy of social media recognition and that gives some insight into his political leaning.


Wait, which is it Captain?  Turned in or court ordered forfeit?

Again note this quote, "These were actually the judge's order saying surrender all firearms"  One mantra you'll see repeated by those defending Benchmade is that the court ordered them destroyed.  But Cpt. Davis doesn't say ordered destroyed.  ORS doesn't give the court the responsibility of ordering firearms destroyed.

What does a judge's order to say "surrender all firearms" mean?  Were they forcibly surrendered under Oregon's red flag laws?  They obviously weren't used in the commission of some violent felony and seized when the offender was apprehended if there was sufficient time to get a judge to order their surrender.  SKS, Browning BPS, and lever guns aren't exactly the type of firearms generally used in criminal activity, though obviously any firearm can be.
It begs the question of whether or not these guns were seized from law abiding citizens who said the wrong thing at the wrong time, and were marked as "dangerous" or whether they were truly removed from dangerous individuals who should be prevented access from guns.

Benchmade claims they were "supporting law enforcement."  But local Facebook posts suggest that OCPD has destroyed guns in the past using a local metal recycler:

Why would Benchmade go out of their way to offer the use of their facility and equipment for the destruction of these firearms unless, like the OCPD patting themselves on the back on Facebook, someone at Benchmade thought it was a good idea?

Why would OCPD even ask Benchmade to assist?  What kind of communication did OCPD have with Benchmade?  We should know soon, since the Firearms Policy Coalition has submitted and FOIA request to OCPD asking exactly that. 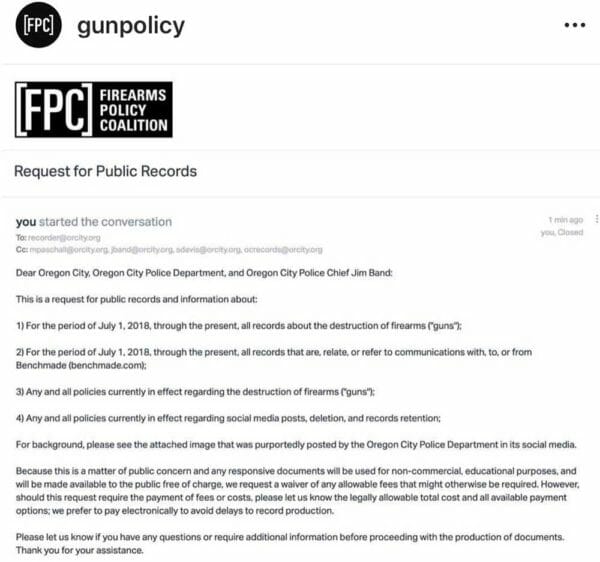 On 2/21 Matt Elliot, director of marketing for Benchmade, went on the Lars Larson podcast to attempt to explain their side of the story.  You can listen for yourself, it starts at 8:30 in, but to me it sounds like they're only sorry that people found out about this, and the excuse that Oregon is a democratic state so we have to support the less evil democrats rings pretty hollow given that they're donating to campaigns outside of Oregon. Matt also claims, with no evidence to substantiate, that Benchmade has "donated millions to 2nd amendment causes."  We'd like some proof Matty.  We don't believe you.
https://www.larslarson.com/lars-larson-podcast/

Summary:
Benchmade uses pro 2A imagery and language and RKBA regarding knives to sell knives.
Leftist PD wants to destroy guns
Benchmade jumps at the opportunity to help destroy guns because it's "supporting LEOs"
OCPD posts it on Facebook
Benchmade's gun owning customers get spicy.
OCPD deletes post.
Benchmade makes official statement that they're sorry we're confused while ignoring all pertinent questions regarding their political donations and motivations.
Benchmade owners start treating their Benchmade knives like how Benchmade treats guns. 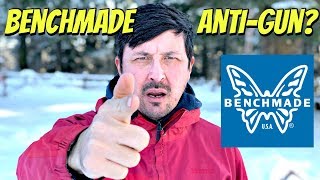 Has Benchmade Betrayed Us?
https://www.youtube.com/watch?v=HwYuLJCOZ4I