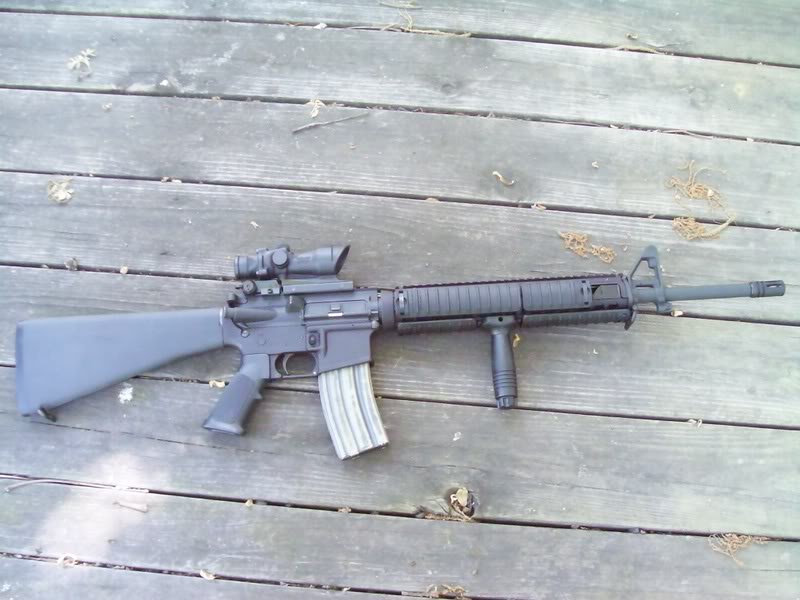 [Jump To Reply]Originally Posted By BB:
the OP should contain what makes a correct AR15A4 M16A4 clone like the cool kid clone threads.

One could probably write a fair sized book on all the changes that have been made to the M16A4 as a weapon system over time, so you can understand that it's somewhat difficult to do a write up to the effect of: "This is what constitutes an M16A4 clone..."

I sure someone will be along shortly to either refute or amend some of this, as I'm far from what I would consider to be a subject matter expert on it all, though I'll give it a try...

In regards to the M16A4, I generally view the weapon as having 3 distinct eras: "Early A4s", "The War Years" (to include US Army & Marine Corps variants), & "Modern Era A4s".

Officially, the M16A4 was adopted on July 29th, 1997, to replace the M16A2 as the standard-issue rifle for both the U.S Army & the US Marine Corps. While there were prototypes rifles (XM16A2E4s) in use on dates before July of '97, their features (grey anodizing or such) are not generally considered when discussing "Early A4" clones.

Early M16A4s are noted by their use of:

M16A2 barrel assemblies (having rifle feed ramped barrel extensions & fixed carry-handle height front sight bases)
Non-"M" or "M4" marked flat-top upper receivers (these early A4 upper receivers did NOT have M4 Feed ramps)
They used peel-washers to time their flash suppressors during most of this period.
Most were delivered to their respective services equipped with standard ("shiny-surfaced") A2 hand guards.
They were delivered with standard detachable carry handle rear sights.
They all used metal trap doors in their A2 stock end plates.
Their safety selectors, while having a "tick" to indicate the mode of operation, were only single-sided (no ambidextrous safeties were in use) & the "lever" itself extended from the edge of the safety rather than from the middle as currently issued ones do.
Their A2 pistol grips also tended to be of a "shinier" black material & the bottom forward "bump" was not as pronounced as currently issued ones (it incorporated a smoother transition to the tip).
While the Parkerizing of the various steel components (Components like the barrel, hand guard retainer cap, flash suppressor, forward assist, rear sights on the detachable carry handle, ect.) were more "grey" in color than they were "black", the upper & lower receivers after the adoption date were anodized to a Type II (black) hard-coat specification. (Someone more knowledgeable than me may know if there were ever actually any "M16A4"s with "grey" receivers, though I know of none that were officially labeled as such.)
Early A4s were known to have used either the US M7, or US M9 bayonet (with early straight tube-style grip).
Sling-use varied between: standard M1-style sling or black A2 "silent" sling, though by sometime @ early '98?, various 3-point slings started showing up in use.
As for side-sling swivels, I'm not certain if it was only a Colt thing or what, but seems like some rifles had them, and others didn't. Hopefully someone more knowledgeable will chime in on this.

(Starting @ Oct '98? - early '99?)
A4s started showing up either equipped with, or were modified by the addition of, a KAC M5 Rail Adapter System (RAS).
These early drop-in rails tended to be more "purple" than "black" in color.

These M16A4s are noted by their use of:

True A4 barrel assemblies having "M4" feed ramped barrel extensions & "F"-marked (detachable carry handle height) front sight bases.
Flat top "M" or "M4" marked upper receivers incorporating "M4" feed ramps.
They used "crush" washers to time their flash suppressors.
Their A2 pistol grips, while still incorporating the earlier tapering of the bottom "bump", were made of a notably less-shiny material.
The steel components (barrel, HG end caps, triggers, ect.) began having more of a true "black" coloring due to changes made in the surface-treatment procedures.
These rifles began being delivered with KAC (or later, P&S Products) M5 rail adapter systems pre-installed from the factory.
They still incorporated metal (aluminum) trap door assembles in their A2 stocks, though the stock-body materials began being produced in a slightly more "grey" color, than the deeper "black" color of earlier models.
Sometime during the later part of this era (@ 2009ish?) ambidextrous safeties started showing up occasionally in use.
Detachable carry handles began to be phased out of deliveries (or packaged separately with the weapon) as A4s began to be shipped out with either no rear iron sights or had Matech back up rear iron sights equipped... Also, KAC 600m? sights were occasionally (though rarely) seen to be used rather than the Matechs during this time period. (May have been KAC 800m sights - my memory is somewhat hazy in this regard)
These rifles were often seen using Surefire M95 & M96-series weapon lights (M951/M952 or M961/M962 models both with & without the use of tape switches) The earliest ones had "wide" bodies (thicker) & "ribbed" head assemblies. Later ones used thinner bodies & had smooth head assemblies. These changes were made in an effort to lighten the accessory weight-wise, at the expense of heat dissipation.
Depending on the AO - Buttstock magazine pouches were often used during this time period. Most were seen to be black in color, though occasionally other color variants like olive drab or camo-patterned colors were used.
Sling use varied dramatically during this period, though most were seen to be of the 3-point type design, usually black in color, though like the stock pouches, were occasionally seen in other color variants. Near the latter part of this period (late 2006ish?), Blue Force Gear 2-point slings began to be seen occasionally in use on A4s.
Also, during this period, many of the standard 30rd magazines with field units were upgraded by the use of Magpul "anti-tilt" followers. Later (circa 2009), the military began procuring their own version of this follower for use in all their future magazine purchases.

US Army variants tended to use Aimpoint M68 red dot sights (Comp M2 earlier, or Comp M3.. maybe Comp M4 for very late models? - I'm not sure exactly when the Comp M4 & M4s models actually started making the rounds)
Us Army variants were also noted to still be using either US M7 or M9 bayonets.

Marine Corps variants usually were noted to be using a Trijicon scope (TA01NSN & TA31-F? models earlier, & TA31RCOA4 models later)
The original TA51 mounts on these optics were at first shipped with knobs facing toward the left side of the weapon. Later this was changed to have the knobs of the TA51 mount face toward the right side. (or was it the other way around?...I can't recall now.)
The Marines started using the OKC3S bayonet with this rifle from @ 2003 onward.

These M16A4s are noted by their use of the following:

Their A2 pistol grips have a distinctive "shelf-like" tapering of the bottom "bump" of the grip, as well as a squared-off taper to the top side profile of the grip. Furthermore, these grips tend to be lighter black in color, nearing closer to a "grey-scale" than "black" and have a flat, non-reflective surface finish.
They use one of 3 different types of safeties - The first being like the older format (War Years) safety except that it is reversible for use with South-Paws, the second is an ambidextrous safety that has a shortened lever on the non-dominant (non-thumb) side, and the 3rd is non-ambidextrous safety though the "lever" extends from the center of the safety rather than from the edge of the safety as those of the previous eras.
The trap doors of the A2 stock assemblies, while still using metal retaining latches, are occasionally found to have plastic door bodies rather than the metal (aluminum) bodies of previous eras. (Though I'm not sure if this is an actual change to the A4 specification, or rather some type of screw-up in the supply chain.)
These rifles are delivered with either Matech or KAC rear sights equipped, rather than with detachable carry handles.
They are often seen equipped with either black or coyote colored Blue Force Gear NSN Vickers 2-point slings & mounts, though M1 slings are occasionally seen in use for "parade" or "training" purposes/exercises.
These rifles are almost exclusively used with either the Trijicon TA31RCOA4 scope (for the US Marines), or the Aimpoint M68 (COMP M4 & M4S) red dot sights (for the US Army).
The TA51 mounts used with the Trijicon scopes were, or rather ...are, commonly replaced with LaRue Tactical quick release lever mounts.
As of this posting, I believe there are no longer any A4s that are still equipped with standard A2 hand guards. They should all be equipped with KAC M5 drop-in rails. (That I know of)
Right around this time frame (2010ish), LED lighting began to really make itself known in the weapon light industry, and as such - M16A4s began to be seen with Surefire M952V LED/Infrared convertible weapon lights, or Surefire M600v? LED "Scout" weapon lights in use. (Not sure of the actual Scout model number, though I believe it was in the 600-type series)

Because of the often rapid, constantly changing nature of the use & development of night vision accessories & laser sighting equipment, I have purposefully not touched upon their use with the M16A4 in this posting, and shall leave that to the AR15 community's more knowledgeable fellows to expound upon.

On a side note:
Throughout the last two eras (War Years & Modern), there have been a number of "Field Modifications" (some "approved" & others ...not-so-much) to the M16A4 weapon system. One such modification, has been the replacement of the Standard A2 stock assembly with a collapsible one such as the Lewis Machine & Tool Company (or also B5 Systems) SOPMOD Stock, or the Veltor "A5" stock assembly. While these "Mods" may have been approved for temporary "fielded" use, while so modified, these weapons are generally no longer considered to be classed among other "M16A4s", but rather among the status of "Special Weapons" or unofficially as "M16A5s". Because these weapons (as modified) no longer fit either the physical description or technical specifications of that of an M16A4, clones which are based around these modifications are generally not considered to be among M16A4 "clones".

Maybe later I will go back through this adding a few relevant pictures, but I think this is about the best I can come up with at present, and hopefully it will be enough to help you to sort things out...

ETA: This write up, while general in nature, primarily refers to completed M16A4 weapons' configurations as they were delivered to the US military @ the timeframes mentioned, and should not be construed as absolutes as to actual configurations that may be found in the field, either presently or at the aforementioned time periods. While the military supply system may continue to provide newly manufactured components built to outdated specifications, these items are primarily intended & supplied as "replacement" components for older weapons, rather than as revisionary components for newly issued M16A4s. Though some mention is made as to various options & accessories used in association with the M16A4 throughout these periods, please note that these comments are by no means the end-all / be-all of what was either available for use, or actually issued to the troops, but rather that which has been either known personally, or shown through reliable sources to have been used @ these periods. ...FDC71.