[ARCHIVED THREAD] - The Hytera RD965 Tactical DMR Repeater Project
This thread is an offshoot of "The HT Thread" and the "Source for Marine VHF Radio reviews?".   I had mentioned that I was getting a portable DMR repeater and there was some interest about it.

I wrote up some information over in this blog post,
http://competition-dynamics.com/blog/cd-upgrades-field-communications-for-2016/
but I'll repost a bunch of it here and expand a little bit.

I am head of an organization that runs big field-style shooting matches.  The smallest parcel of land we use is 1000 acres; the largest we've used was approx 230 square miles; and right now we're using about 40 square miles for our 2016 adventure race.  These are typically out in the middle of nowhere with no cell coverage (unless you happen to be on top of the mountain).  This presents a logistical challenge for match operations. Staff need to be able to communicate, and in some cases, competitors need to communicate with staff as well.

We had evolved from using bubble pack radios, to VHF, to VHF with a mountaintop human relay.

I was originally looking for a VHF repeater solution and found Tactical Repeater http://www.tacticalrepeater.com/.  This is a side business for Kent, whose main job is owning and running a very large (I believe the dominant) linked commercial DMR system in CO, WY, and NE.  Kent oriented me to DMR for maximum coverage and flexibility.  I bought two of the Connect Systems DMR radios (under $200 each) and tested them out for a couple months.  They basically blew away analog VHF/UHF for everything we were trying to do.

In testing UHF DMR in simplex mode, I found on typical terrain or on road convoys, the DMR radios gave us approx 2-3x the distance and had many fewer coverage holes in a given set of terrain.  Another anecdote, from the basement of my house in Fort Collins, I can hit the Boulder area DMR-MARC repeater, using a HT, in DMR mode.  This is pretty amazing considering the distance and stuff in the way.  On analog UHF, I am lucky to hit the local Fort Collins (Horsetooth) repeater from the exact same position.

Only problem, the DMR repeaters Kent deals with are fixed position enterprise-level units, and the "manpack" repeaters he builds are typically built around ultra low power VHF/UHF.  So I did a bunch of research online and found the Hytera RD965 repeater.  It's small, a little larger than an old Hayes Courier HST modem.  The downside compared to the other manpack repeaters was going to be its power requirements.  I said that I didn't mind if we needed to have more batteries or solar panels, so we just went ahead with the project.

The idea is that we ID the best mountain-top position for the repeater to give maximal coverage of the event area, drive/hike it up there, and then leave it there for about to two weeks, until we're done with the site.  The repeater is to run autonomously during that time.

Anyway, this is what he came up with: 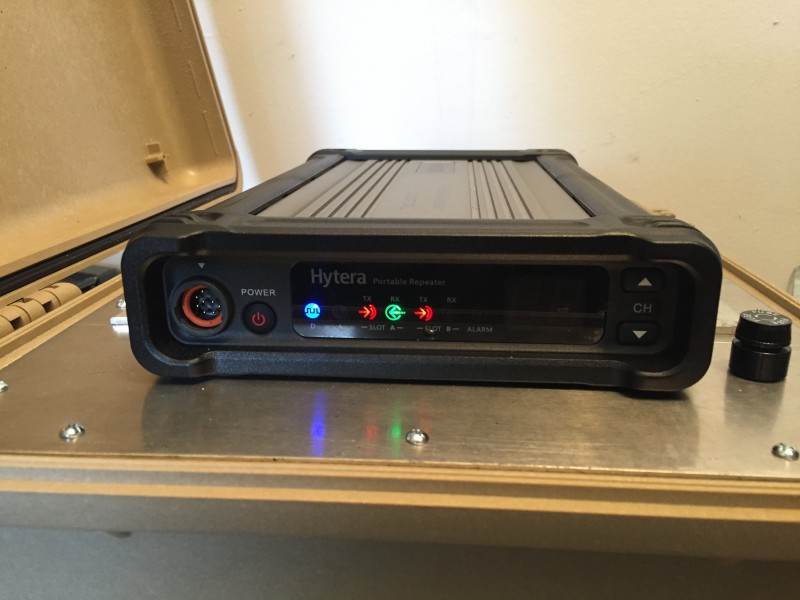 Packaged into a Pelican 1500 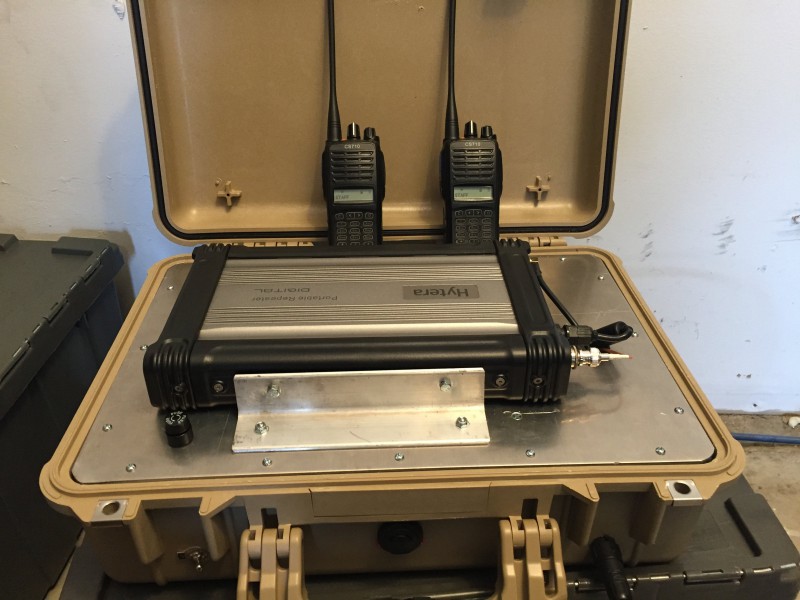 The Pelican case is fully sealed and operates closed, out in the elements.  It contains the repeater, 40 Ah of reserve battery power, a charge controller, and a custom-tuned very clean duplexer.  When closed, the only controls/ports the box has are: (1) the on/off switch, (2) the RF connector for the antenna, and (3) an optional DC power plug.  With a 60 Watt milspec solar panel plugged into the DC power port, the repeater will continue operations indefinitely.

The DC power port can also use an external battery bank or wall power supply.

It packs up quite small.  The repeater case is about 42 lbs (batteries) and then there's the bulk of the antenna tripod stand and antenna.  Technically this is man packable, but it can be strapped to the back of an ATV and taken anywhere with ease. 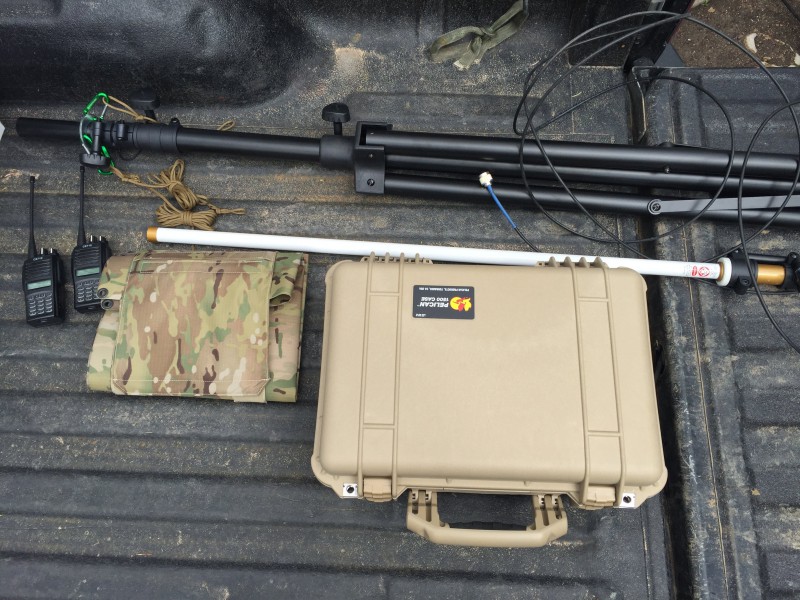 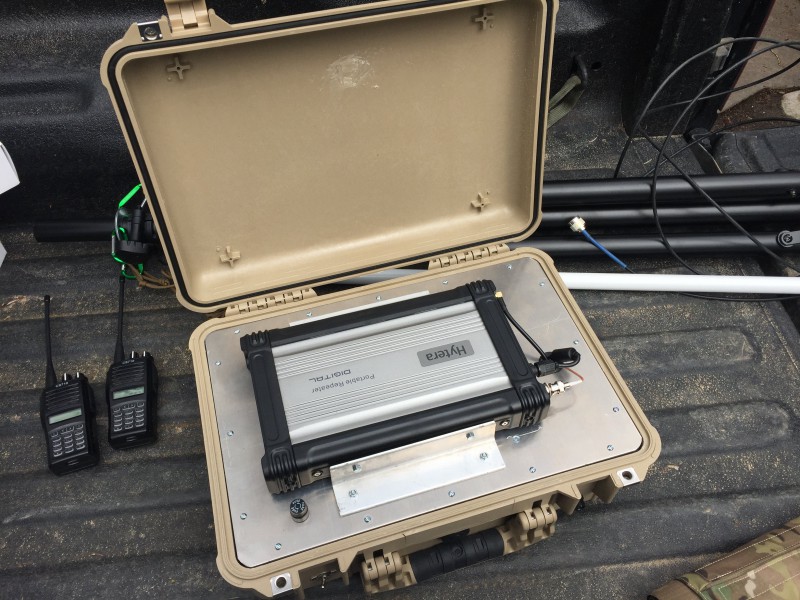 With DMR, you get two timeslots, near infinite talk groups, unique caller/radio ID's, encryption, and an effective SnR advantage over analog.  What's not to love..

I am running this on FCC-licensed commercial UHF frequencies.  With a change in the duplexer, there's no reason it couldn't be operated as an amateur repeater.

Now radios-- There are few choices for inexpensive but decent DMR radios, where "inexpensive" means under about $250 per radio.  These CS710's came in about $180 per each.  The cost constraint comes in due to the number of radios we need.  Connect Systems, especially Jerry and Chris, have been good to work with.  The downside of the CS radios is that the programming/firmware is not very mature.  Everything mostly works, but there are surprises here and there, which will be fixed in future firmware releases (hopefully soon).  But I can buy 4 or 5 CS radios for each 1 /\/\ I could afford, let alone the hassle for software and programming support from /\/\.

While we have a commercial FCC license to operate this system, I am also a HAM (Extra).    A buddy (also a HAM) familiarized ourselves with DMR technology and capabilities by making contacts over the local DMR network and DMR-MARC.  That was helpful.

There you go-- a tactical DMR repeater.