[ARCHIVED THREAD] - Geissele all the HK 416s -- A Brief Photo History of the HK 416 SMR
Figured I'd share these with the group--a stroke of insanity struck me a while back, and it's led to my amassing something of a "collection" of Geissele HK 416 SMRs.

Ironically, what first got me looking more closely at the 416 SMRs was that I was looking for one on the used market a while back for an MR556/HK 416 conversion that I was building, and I wanted to make sure that I didn't get hosed buying an airsoft replica, some of which I've come to concede are actually quite good copies--wrong material, stolen design, but they appear to be close enough that it takes some looking to figure out that they're copies, and not authentic Geissele rails.

A Brief (and Incomplete) Photo History of the HK 416 SMR:

From Top to Bottom:

As many undoubtedly know (and Geissele folks, feel free to correct me if I've got anything wrong

)--Geissele Automatics' first "Super Modular Rail" handguards were developed around 2011 at the request of an organization seeking a better solution for their HK 416Ds than the HK factory quad rail.  Previously Jon Canipe had mentioned having seen prototype 416 SMRs without the QD sling swivel, but I hadn't actually seen one of them until early this year, so naturally when I saw it, I had to snatch it up.

Presumably there was a PN: 05-172, REV. A, but I have been unable to get additional information on what differences there may have been between REV. A and REV. B., I will go further into the differences between variants in another post.

The most notable difference between the PN: 05-190, REV. A and the PN: 05-172, REV. B is obviously the addition of the now-distinctive 45 degree QD swivel mounts, and the resulting change in the spacing and size of the cooling holes on the "top" row of the handguard.

Here is a photograph from the 2012 SHOT Show reporting showing the REV. A rail:

The next rail is a Norristown-manufactured PN: 05-190, REV. B, which appears to have been the first version available on the commercial market, though some REV. As appear to have been sold as blem rails:

The REV. B appears to be the quintessential "type specimen" of the 416 SMR, as it introduced the rotation limited QD sling swivels, and has noticeably more metal around the handguard retaining screw than either the PN: 05-172 or PN: 05-190, REV. A.  Jon Canipe received one of the early production rails, which appears to be a REV. B based on the these features:

The bright red anodized HK Shooting Team 14.5" SMRs also appear to have been based on the REV. A design:

Note that none of these rails is currently in production, as 416 SMR production has moved on to another variant that I do not have examples of, but that no longer appear to have "Revision" series identifiers on them, like this 10.5" example: 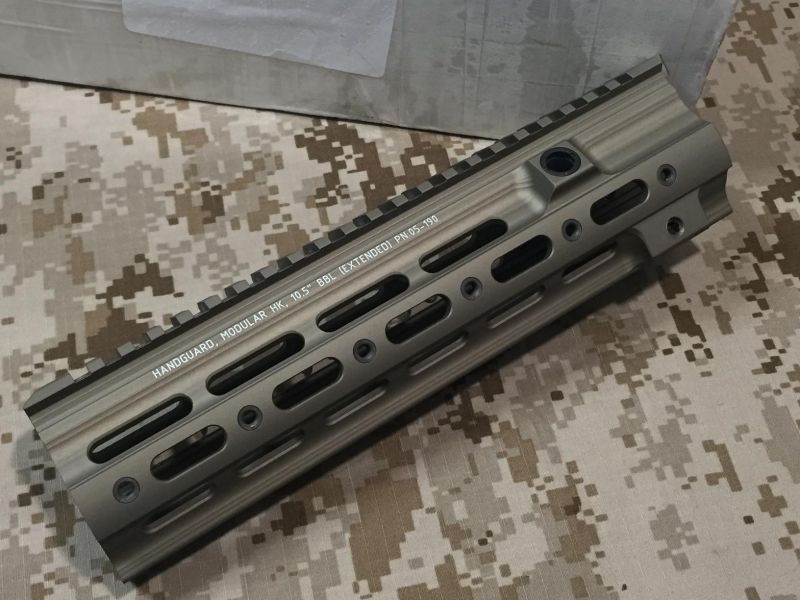 The most notable change between both the 10.5" and 14.5" 416 SMRs from the examples above is the reduction in the number of cooling slots along the "top" row, from five to four for the 10.5", and from eight to seven on the 14.5".  Furthermore, the spacing of the first rail slot appears to have been slightly altered to prevent the distinctive "folding down" below the horizontal plane when used with a KAC M4 Micro front sight.

More to follow with detail photographs of changes between the different variants!