[ARCHIVED THREAD] - Aluminum Glock build thread (for people who hate custom plastic guns) (w/ PICS!)
When I posted this thread @ALASKANFIRE suggested a build thread when it was done.

Back in November I went back home to NH and saw an aluminum CCF Raceframe at a local shop.

For those who aren't familiar with the CCF Raceframes, back in the 2006-8 time period a small company built aluminum and stainless steel G17/G22.3s frames. Both were intended to update barrel lock for accuracy and the trigger geometry for a better trigger, while the steel frame added weight for open class guns.

At the point these were released, the Glock aftermarket wasn't blowing up like it is now. People interested in these were basically dropping OEM guns into the frame leaving them with excessive serialized parts. This combined with a small aftermarket, and the dire warning not to use aftermarket parts so not to damage the expensive frame made this concept die pretty quickly.

I've always liked the idea and when I saw it at the store I had to have it. So I bought a blue label G19.4 instead and tried to forget about it.

The next month I went back and bought the Raceframe. $330 for the frame with all the frame internals. 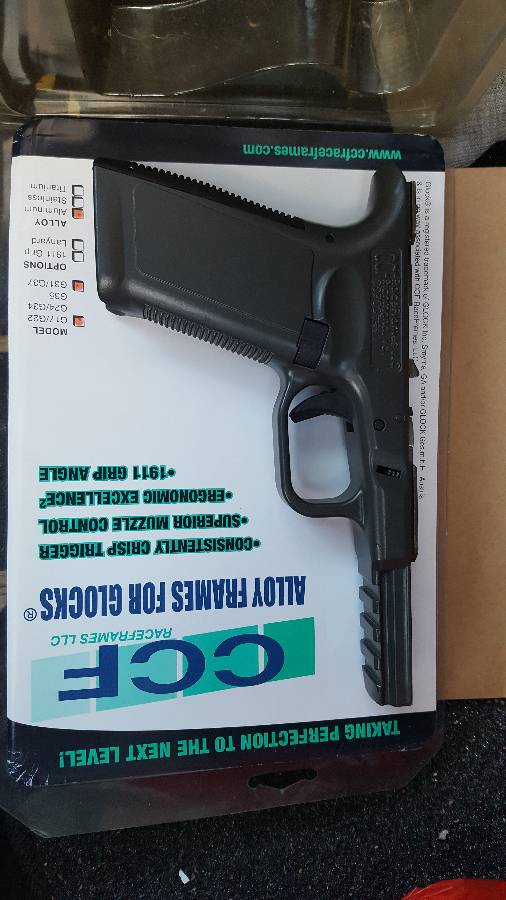 I wasn't sure exactly what I wanted to do with the frame. What I WAS certain of was that I like utilitarian pistols with every part carefully selected for a reason, not for the premium, and wasn't looking to send it off for lightening cuts and gold barrels.

I always wanted to play with an RMR, and am convinced of the utility of the ATOM slide mounts. RMRs and MRDS keep getting better, but we're not "there yet" and I wanted to future proof the gun. I found a good deal on an ATOM G17.3 slide of Glocktalk and picked it up. 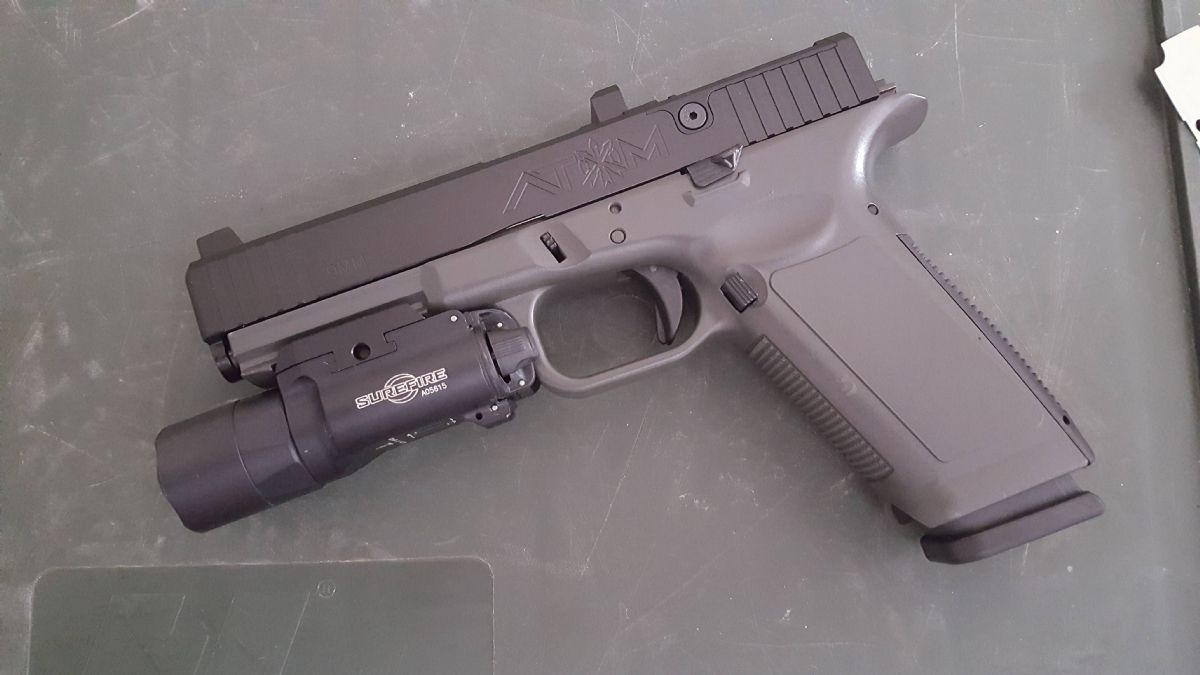 The finish on the CCF frames aren't exactly all that aesthetically appealing. Something about the shiny grey they went with rubbed me the wrong way. A trip to GDs "favorite" cerakoter (before they started shooting themselves in the foot) and it was exactly what I wanted; the look of a no-frills service pistol in a basic flat black (think Sig nitron). 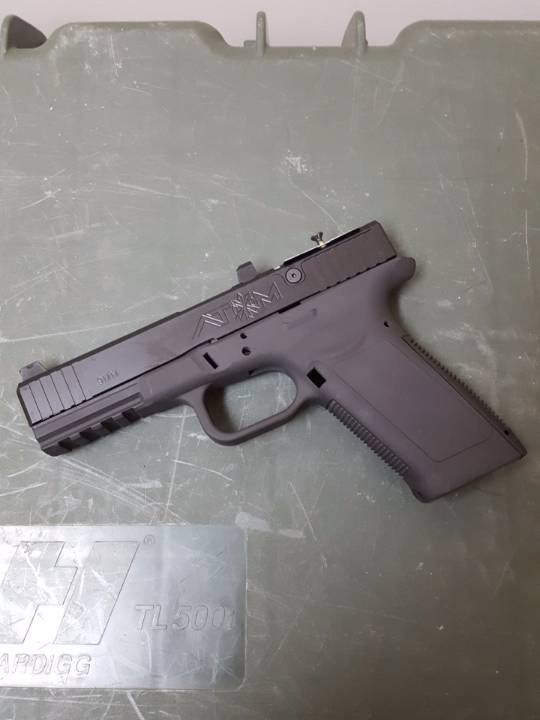 Now the search for a barrel. The more reading and discussion I read about the Roland Special the more interested I was in trying a comped Glock. So I needed a barrel/comp setup. I looked at the KKM combo, and all manner of premium aftermarket barrels with a TBRCI comp. In the end, I couldn't get straight answers from any barrel makers about lug dimensions.

The guy who made the frames and some people who've built them were very adamant about not using a barrel that oversizes the locking surfaces, as the locking block that comes with the frame was designed to tighten up the fit of a factory barrel and could be damaged. Oddly, the barrel choices I was recommended are known for tightening up the hood locking surfaces, which can cause an issue with the ATOM slide, which has a tighter hood.

So I searched for, and found, a factory Glock threaded barrel cheap. Since both the frame and slide were designed to tighten up a factory barrel an OEM seemed like the best choice, and the TBRCI comp can be had in 13.5x1 metric threading.

While trying to decide between the cheaper Delatpoint Pro (with it's mounting and sight height concerns) or the more expensive, proven, and svelt RMR the RMR type 2 was announced and I decided on an RMR06 for $350.

Note: Don't forget to bend the side contact and shim the battery. Mine flickered during dry fire. Fix those 2 points and no issue anymore. 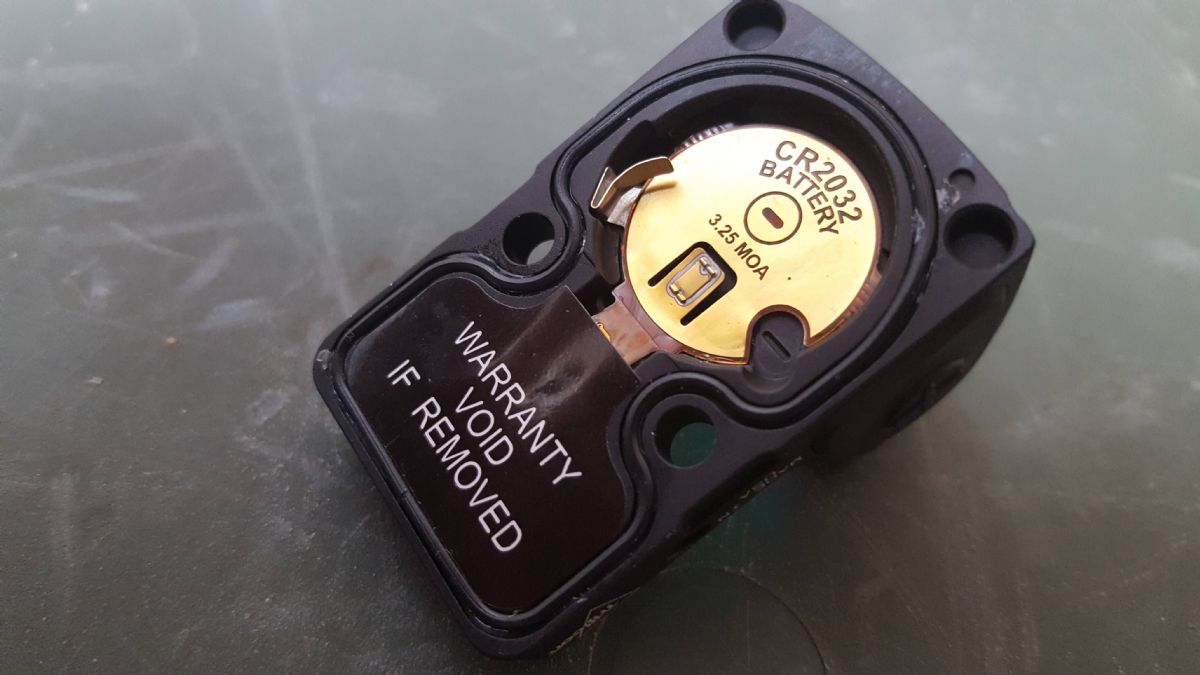 The slide was very tight on the frame after the cerakote, so I did some light filing and tuning until it was nice and smooth. 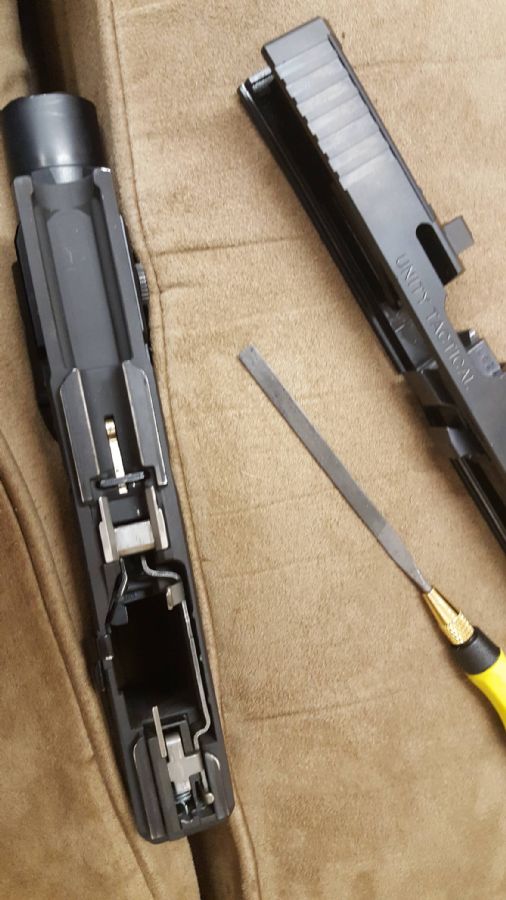 Now, it needed some grips. I wasn't going to spend the money on checkering, this is a metal frame gun that doesn't accept grips, and you can't stipple it.
A panel of Talon grip and some cutting and I have grip panels, undercut, and thumb rest pads. 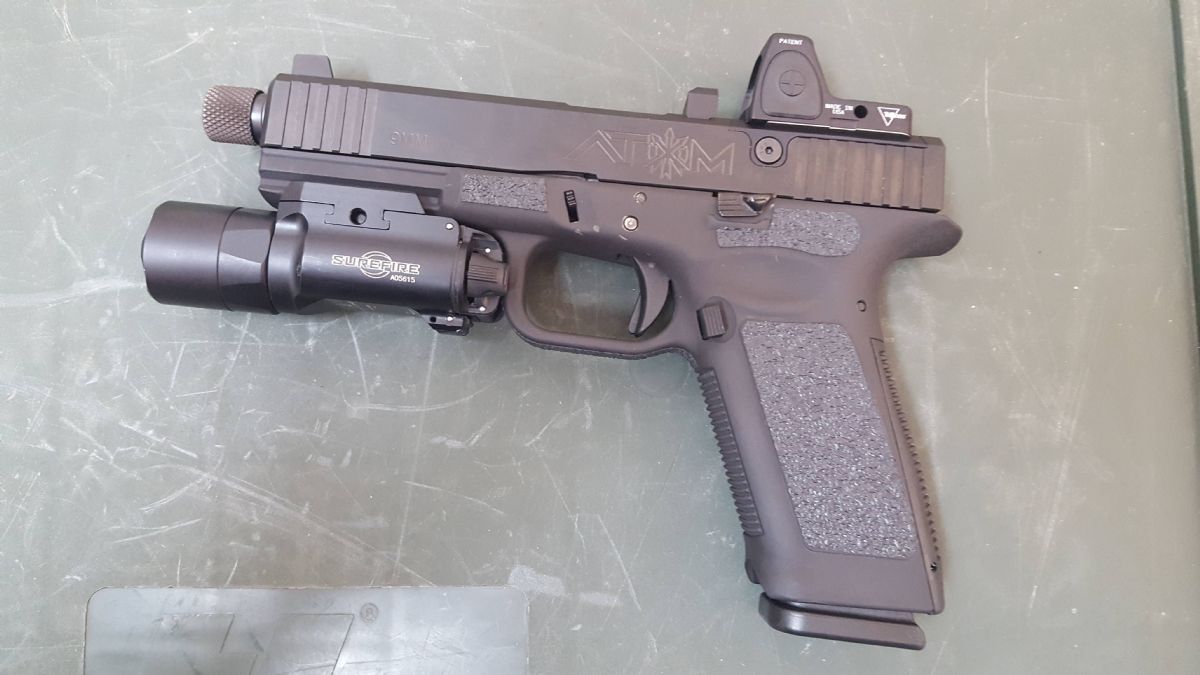 I finished with OEM slide internals, a TBRCI metric comp, and my most indulgent parts: Taran Tactical +6 extensions. I also had the opportunity to get a Tau Dev Group SCD - Striker Control Device (aka "Gadget")

I was planning on going with an OWP or APEX trigger. However, the frame with an OEM Smooth trigger and (-) connector is perfectly weighted with a reasonable take up and very nice crisp break. Much nicer than a stock Glock and no staple gun trigger. 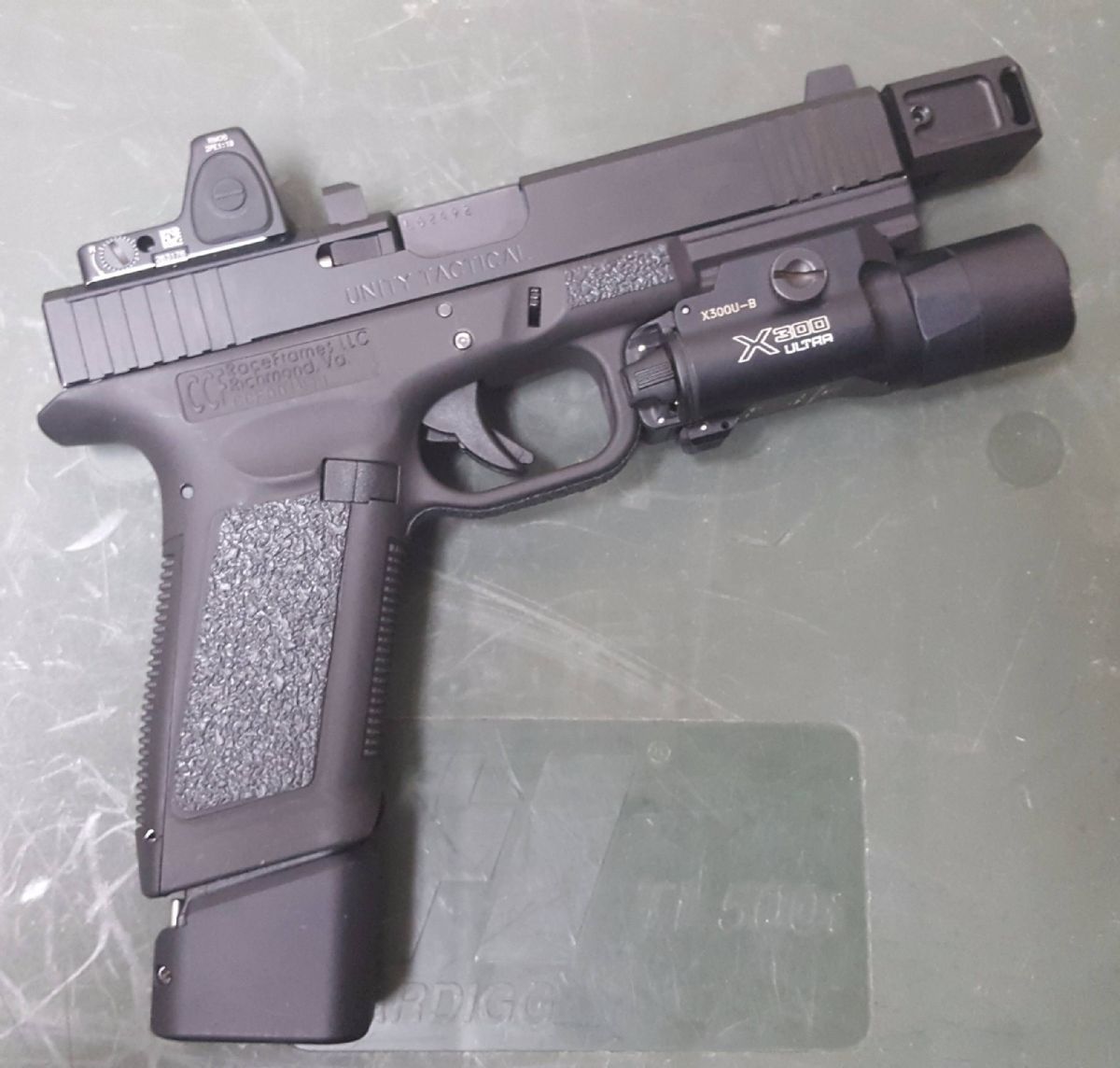 The recoil spring was a bigger concern. The frame manual is very insistent about using a Shok-buff to reduce battering of the slide on the frame, and there's typically a need to reduce spring weight using a comp. So I picked up shock buffs and an additional reduced (13lb) recoil spring in case the standard (15lb) didn't. The shok buffs didn't fit, I couldn't hand cycle the slide, and frankly I have a feeling they were specified more for shooting .40.

The designer also recommends against metal guide rods because they can damage the frame as well.

The final part was a holster. Because of the unconventional setup of a comped G17, I was hesitant about modifying and trashing an expensive Safariland G34 6354DO. Instead I spent more on a fully custom OTG Hex holster. Black multicam fabric wrapped with a Safariland SLS retention hood.

Note: If you order from OTG make sure you know what hardware you need. I ordered the Sarfariland mounting option (intending to use the Safariland G-Code RTI adapter), and none of my OEM Safariland hardware fit, Which resulted in an absurdly over-price second order for threaded backings from OTG.

There's also an odd amount of excessive height of the hood over the back of the slide. 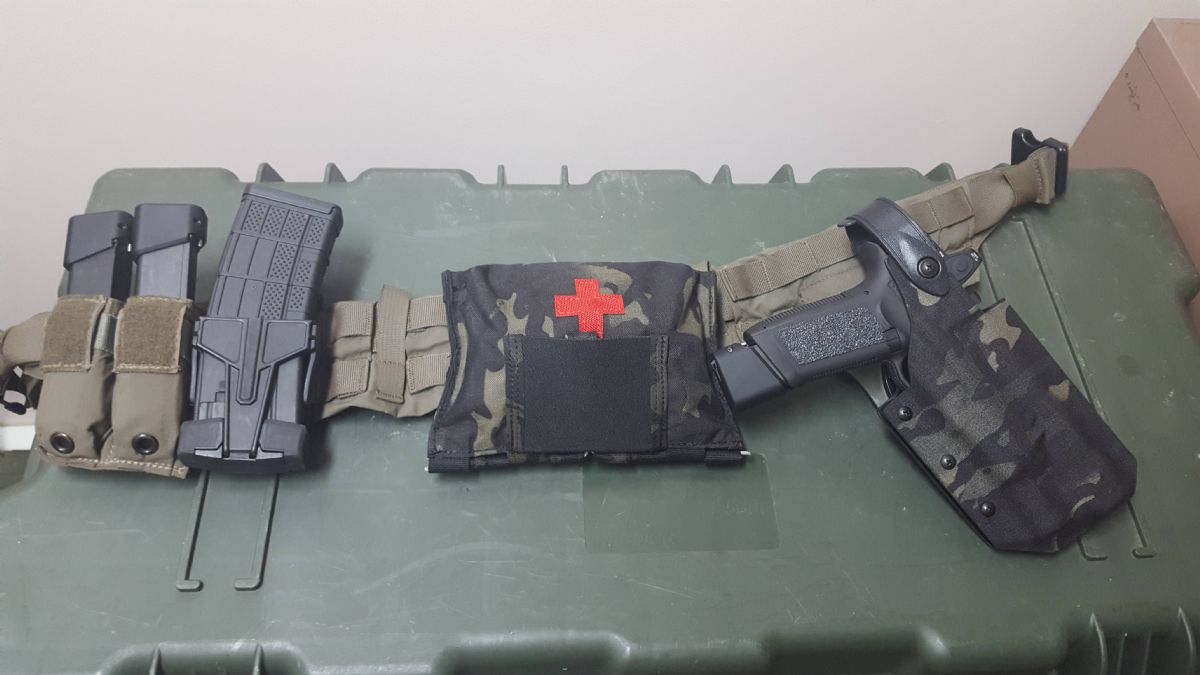 So it was all built and ready go. Yesterday I went with a group of guys from work to a "bring all your guns and shoot" type morale event. We probably put about 400 rounds through this using a combination of various cheap 115gr, a couple flavors of 124gr, and some 147gr Ranger. It fed and fired everything reliably using a stock 15lb RSA. The only hiccups being an occasional failure to lock back with some cheap 115gr. I consider that acceptable performance for this type of comped gun, and a tradeoff for not dropping recoil spring weight and risking damage to the frame. 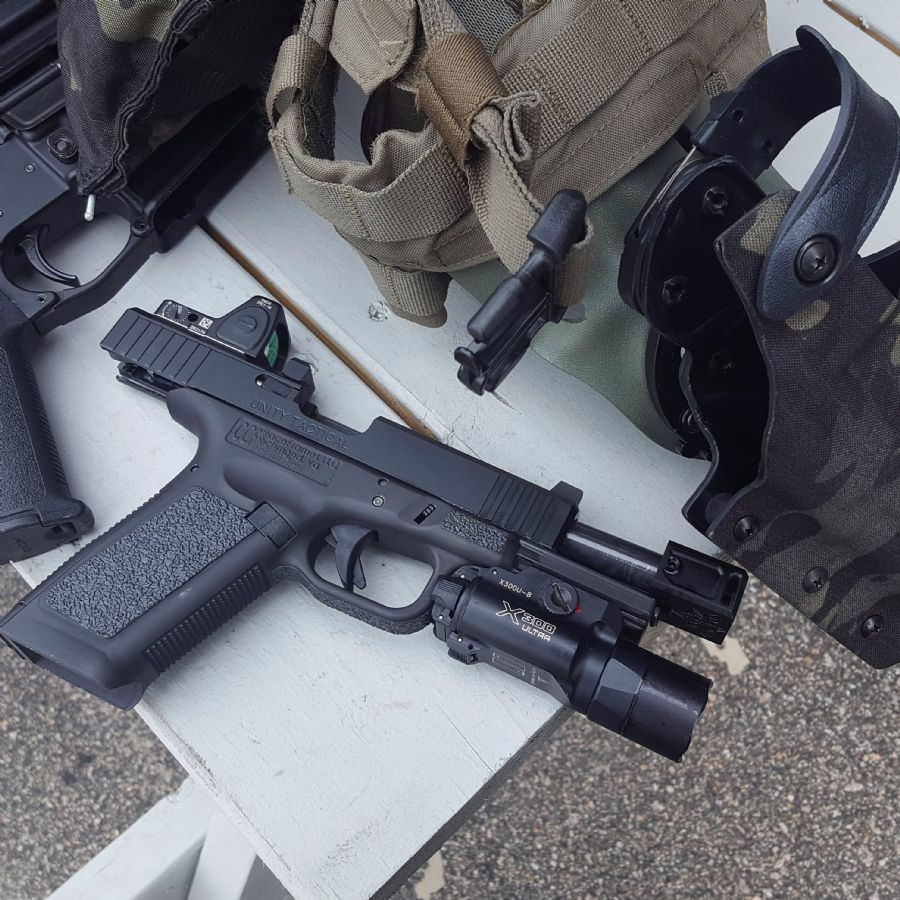 This gun is like shooting a .22 with no major concussion that people seem to expect from comps (due to rifle experience). Super fun, seemingly accurate (benched quickly shot 2" groups) at 25y. This isn't a gun I built to make up for my lack of skill, and it certainly doesn't do that. But I LIKE to build cool guns, and wanted to try out a whole bunch of different technology and concepts.

Check out the absolute lack of recoil: brass barely out of the gun, gun back on target, with the slide closed. 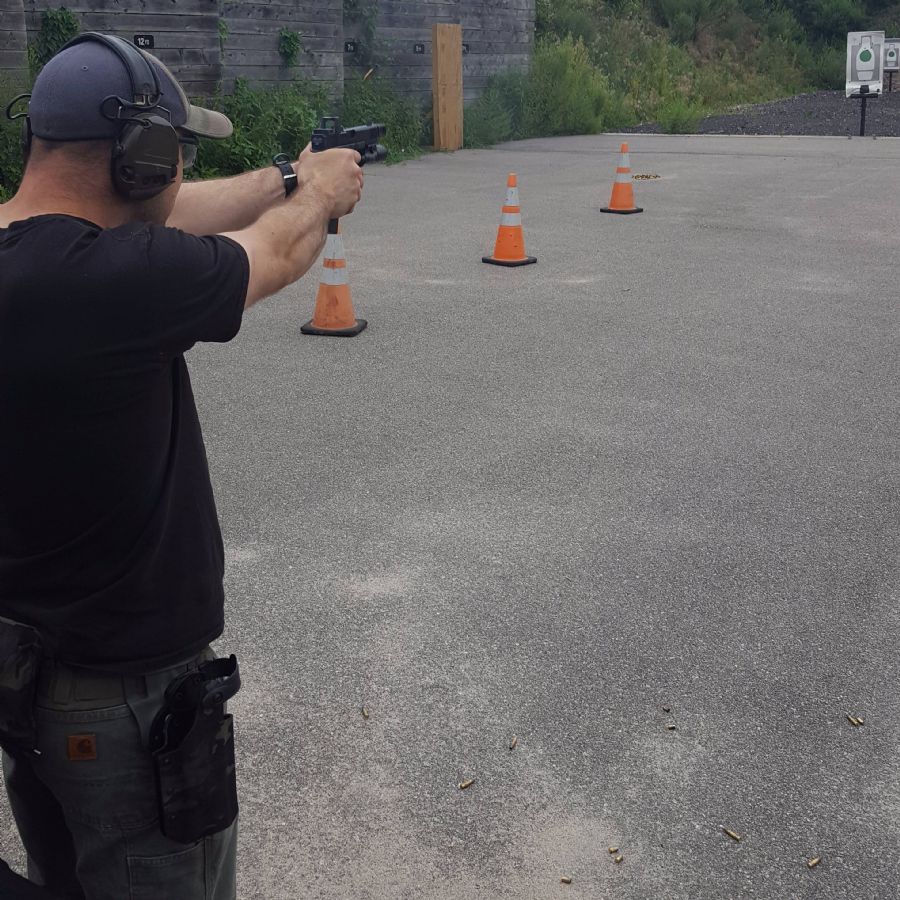