[ARCHIVED THREAD] - jennicam dead
I never thought much of her antics, but she was kind of gutsy in her own right. But one thought did occur to me:

Q:What do gun owners and Jennifer Ringley have in common?

A: They both got screwed by PayPal.

LET THE CREDITS roll, Jennicam is dead.
After seven years of non-stop broadcast, the webcams that relayed every intimate detail of Jennifer Ringley's life have been switched off. 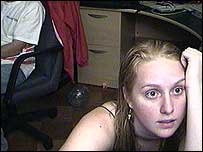 Happier times
For her fans, there will be no more viewings of Ms Ringley slumped in front of the TV, doting on her countless pets, idly plaiting her hair, pottering around her house or sauntering naked between rooms.

For a brief spell in the late 90s, Jennicam was the most talked about site on the embryonic internet.

Started in 1996 by 20-year-old Jennifer Ringley, then a student in Pennsylvania, US, Jennicam was billed as an "experiment". Ms Ringley rigged up a camera to the computer in her college dorm and broadcast, live and unedited, her life over the web.

The site attracted massive interest, at one point drawing 100 million hits a week, according to its creator. Was it art, a charter for stalkers, a setback for feminism - or all three?

While cultural commentators thrashed out the point of observing, for entertainment, ordinary people doing ordinary things (sound familiar?), Jenni was invited on to the David Letterman Show and featured in a modern art exhibit.

"I keep Jennicam alive not because I want or need to be watched, but because I simply don't mind being watched," Ms Ringley wrote.

Undoubtedly, the challenge for many of her admirers was to catch Jenni in a state of undress, or even having sex. Yet the bulk of Jennicam's output was more mundane - especially since Jenni herself now has a full-time job out of the home.

The demise of Jennicam has been blamed on the online payment service Paypal, which used to process payments by subscribers. The company admits it severed its ties because of the nudity broadcast on Jennicam.


"Over the hills and o'er the Main
To Flanders, Portugal and Spain.
King George commands us, we obey
Over the Hills and Far Away..."