[ARCHIVED THREAD] - Palmetto State Armory PA10 Gen 2 Range Report (Page 1 of 4)
Last Monday I jumped on the PSA PA10 sales going on. I ended up getting the 18'' SS Mlok upper and gen 2 lower. Total price with dealer transfer was about $650. I also order a SIG Whiskey 3 optic to try since Cabelas had them on sale for $119 and figured if it sucks I can throw it on one of my .22's. I threw the optic in a Burris PEPR, not my favorite mount but I had one in my parts bin and this is a budget build.

Today I got it to the range and put 380 rounds through it, of all types of ammo without a single malfunction. The gun did seem a bit over gassed but it was manageable and as I said no malfunctions so I don't plan to do anything about that.  I ran some of the shittiest ammo I could find through it to really test the function.

Front Bi pod and rear Caldwell bag. I first established a 50yd. (first berm where the jug is) zero to make sure I was on paper and get the windage on center. After I was centered I pushed back to the 100yd far berm and shot groups.

The worst group fired was with the Tula 165gr. SP which was a hair above 3'' sans one flyer

The best group as expected was the Federal Gold Medal Match 168gr. Which was right at MOA, There is a video of me shooting this group, which was a fairly rapid fire when going for groups. 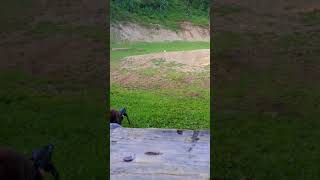 Every other ammo was somewhere in between. I only had about 4 random rounds of the brown bear so didn't really shoot a group with that although I suspect it probably would have been a bit worse than the tula based on the 4 shots that I did fire.

For an all in price of <$800 including the optic I couldn't be more pleased. I know 380 rounds is hardly a test of reliability for the long haul but this will primarily be used for deer hunting so it seeing a super high or rapid fire round count is unlikely. I will admit I was very skeptical based on the reports but so far I am happy. If you're on the fence about getting one I would FO before they switch to the PX10 and the prices increase.