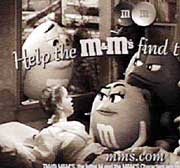 NEW YORK (CNNfn) - In a marketing gimmick reminiscent of the gold ticket in "Willy Wonka and the Chocolate Factory," M&M's will run a contest in 2004 which will offer six grand prizes and for a brief period offer the world-famous candy in only black and white.

M&M's plans to phase out color in 2004 - the "official" announcement will be made on "Dick Clark's New Year's Rockin' Eve" on ABC - in what the company is calling the biggest transformation in its 60 year history. M&M's spokesman Jeffrey Moran said the New Year's Eve announcement is timed to "turn over a new leaf and start a new phase."

M&M's parent company Mars is privately held and therefore does not release sales figures, but overall chocolate sales have been flat in the last few years. Moran characterized M&M's sales as "stable," but added that the company is trying to gain market share.

The company will re-introduce color four to six months into the new year by running a contest in which six bags - out of the more than 100 million in retail stores - will contain colored M&M's. Each of the six will contain M&M's of the same color - one each for red, yellow, green, blue, brown and orange.

The purchasers of those bags will receive grand prizes -- yet to be determined -- and that "event" will trigger the re-introduction of color, but not necessarily the same color. The company spokesman would not elaborate.