[ARCHIVED THREAD] - MI guy gets ticket for allowing car to warm in driveway. (Page 1 of 2)
I am pretty sure we have covered this one before.  But now there is video of the court proceedings fighting the ticket.   Cliff notes:  Guy has car running in driveway to warm up..... cop drives by and sees it running unattended and stops and writes a ticket due to public safety concerns.   "Someone could steal it and speed and hurt someone!!" paraphrasing the police chief.

But the officer doesn't knock on the door or notify anyone in the house that it is an issue.   So it couldn't possibly be a true public safety issue because he left the car in the same condition he found it only with a ticket on the window.

The icing on the cake was the judge chewing out the defense lawyer for the info ending up on facebook without the judges express consent.   Apparently someone in attendance at a previous hearing was livestreaming the case on facebook.    The Defense attny knew it had happened (but wasn't doing it personally) and the judge flips out and puts him in contempt of court.     I think for transparency sake all court cases should be available to be recorded if the defense or prosecutor wishes.   Helps keep the courts honest.   Sure you can get transcripts but that doesn't show obvious contempt, snarkiness, or possible bias in peoples actions during the case. 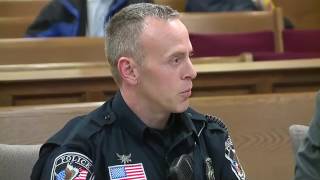 Michigan judge orders man to pay ticket for allowing car to warm up in driveway
https://www.youtube.com/watch?v=tFkFH6Nol5o

Michigan judge orders man to pay ticket for allowing car to warm up in driveway
https://www.youtube.com/watch?v=tFkFH6Nol5o

[ARCHIVED THREAD] - MI guy gets ticket for allowing car to warm in driveway. (Page 1 of 2)