KKK leader threatens to 'burn' Univision journalist who is the first black person on his property in 20 years. 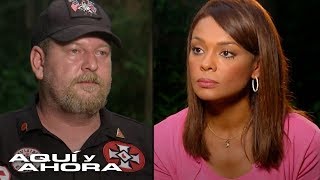