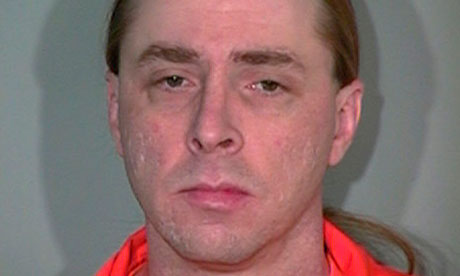 Jeffrey Landrigan was executed in Arizona by lethal injection after a stay was lifted by the supreme court. Photograph: AP


Arizona
executed a man last night after the US supreme court lifted a stay
granted when the state refused to reveal how it obtained one of the
drugs used in the death chamber from a British manufacturer.

Jeffrey Landrigan, who was convicted of the murder of Chester Dean Dyer in 1989, was pronounced dead at 10:26pm local time.

A
federal judge put Landrigan's execution on hold on Monday after defence
lawyers argued that the state's failure to reveal its supplier meant
the drug might not meet US standards and that could amount to cruel and
unusual punishment.

But the ruling was overturned by the supreme
court, and Landrigan was put death by lethal injection in Arizona's
first execution since 2007.

The state's attorney general, Terry
Goddard, used a little known law preventing the identification of
executioners to defy a court order requiring the state to reveal the
exact source of an anaesthetic, sodium thiopental, used in the
execution.

Goddard argued that Arizona had the right to keep the
information secret under laws protecting the identity of executioners
and others with "ancillary" functions.

Yesterday, Goddard's office confirmed to the Guardian that the drug was obtained from a manufacturer in Britain
because of a shortage in the US but declined to name the company
concerned. Sodium thiopental is used to render prisoners unconscious
before they are killed with other drugs. It has been in short supply in the US for months, forcing at least two state governments to look for alternative sources of supply.

Kent
Cattani, Arizona's assistant attorney general, acknowledged at a court
hearing last week that the state had not got the drug from the only
approved US supplier, Illinois company Hospira.

It is possible
that the UK supplier was unaware that the drug was intended for use in
executions as several US states have sourced it from abroad for use in
hospitals.

Hospira has said that it does not approve of the use of the anaesthetic in executions.

"[The drug] isn't indicated for capital punishment,
and Hospira does not support its use in this procedure," it said.
"Hospira has communicated with departments of corrections in the United States to advise them of this position."

The
company says that the shortage of supply has been caused by "a supply
issue with the active pharmaceutical ingredient, which is supplied by a
third party". It says it expects normal supplies to be resumed early
next year.

Landrigan was sentenced to death for strangling and
stabbing Chester Dyer in 1989 during a robbery weeks after escaping from
an Oklahoma prison where he was jailed for another murder. But his
death sentence has come under increasing scrutiny.

Last week,
Cheryl Hendrix, the judge who condemned Landrigan, told a clemency board
that she would have given him a lesser sentence had she been aware of
the brain damage caused by his mother's heavy drinking while pregnant
and his turbulent childhood.

"The death penalty in this case is not appropriate and never has been," she said.

The
clemency board split on whether to recommend to Arizona's governor, Jan
Brewer, that she reduce Landrigan's sentence to life without parole.

Landrigan's father died of natural causes while awaiting execution for murder in Arkansas five years ago.

California stayed an execution a couple of weeks ago for the same reason.  Hopefully, they can place a nice, big order.