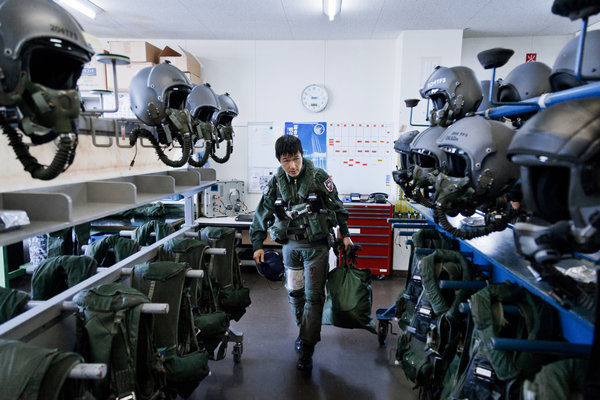 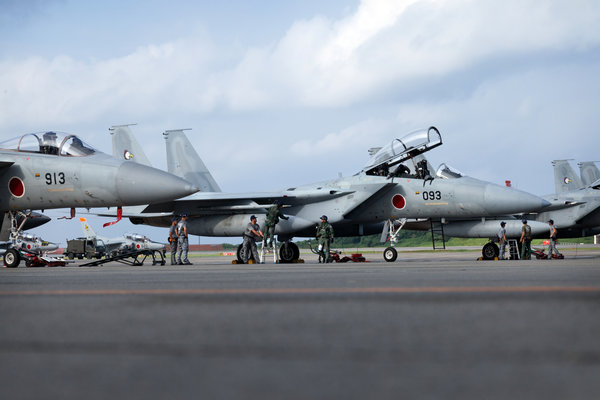 NAHA, Japan — Once a sleepy, sun-soaked backwater, this air base on the southern island of Okinawa has become the forefront of a dangerous test of wills between two of Asia’s largest powers,
At least once every day, Japanese F-15 fighter jets roar down the runway, scrambling to intercept foreign aircraft, mostly from China.The Japanese pilots say they usually face lumbering
reconnaissance planes that cruise along the edge of Japanese-claimed airspace before turning home. But sometimes — exactly how often is classified — they face nimbler Chinese fighter jets
in knuckle-whitening tests of piloting skills, and self-control.“Intercepting fighters is always more nerve-racking,” said Lt. Col. Hiroyuki Uemura, squadron commander of the approximately
20 F-15 fighters stationed here at Naha Air Base. “We hold our ground, but we don’t provoke.”

The high-velocity encounters over the East China Sea have made the skies above these strategic waters some of the tensest in the region, unnerving Pentagon planners concerned that
a slip-up could cause a war with the potential to drag in the United States. Japan’s refusal to back down over months of consistent challenges also represents a rare display of military spine
by this long-dovish nation, and one that underscores just how far the rise of China and its forceful campaign to control nearby seas has pushed Japan out of its pacifist shell.

Under its nationalistic prime minister, Shinzo Abe, Japan has embarked on the most sweeping overhaul of its defense posture in recent memory. Not only has Mr. Abe reversed a
decade-long decline in military spending as part of what he calls “proactive pacifism,” but his government is also rewriting laws to lift restrictions on Japan’s armed forces, which
are already taking a more active role as far afield as the Gulf of Aden. It was, in fact, a speech by Mr. Abe that included tough statements on the Islamic State and an aid package
to fight extremism that the militants cited as the reason they beheaded two Japanese hostages in January. Videos showing the men’s bodies, posted online, gained Mr. Abe
some traction for his notion that Japan must be more prepared to take on those who mean it harm.

At the heart of Mr. Abe’s strategy is a drive to create a more public profile for Japan’s military, the Self-Defense Forces, which have been strictly limited to defending the Japanese
homeland since their creation in 1954, and which for decades afterward were barely acknowledged by a public leery of anything resembling Japan’s World War II era militarism.
Although Mr. Abe still does not have enough public support for his long-stated goal of constitutional changes to permit Japan a full-fledged military, he is pushing Japan’s purely
defensive armed forces into an unfamiliar role as the standard-bearer of a more assertive foreign policy, and a deterrent against a modernizing Chinese military.

Japan is saying, ‘Uh-oh, maybe with a rising China we have to start thinking differently,’ ” said Sheila A. Smith, senior fellow for Japan studies at the Council on Foreign Relations in
Washington. “For the first time since World War II, Japan is finding itself on the front line. And for the first time, it has to ask itself, what does an independent defense plan look like.

Rebuilt after Japan’s defeat in 1945 at the encouragement of the United States, the country’s technologically advanced military took a secondary role to American forces,
helping patrol strategic sea lanes in the face of a Cold War-era Soviet threat. The Self-Defense Forces’ role has expanded over the decades — Japan sent 1,000 noncombat
support troops to Iraq in 2004, its biggest overseas deployment since World War II — even though the country still bars itself from possessing offensive weapons like cruise missiles
considered necessary to launch full-blown attacks.

With a quarter of a million uniformed personnel, Japan has slowly built up a military larger than that of other midlevel powers like France or Israel, though still far smaller than the
2.3 million-strong People’s Liberation Army in China.


(More at above link)