[ARCHIVED THREAD] - Cop rear ends smart car at 104 MPH. (Page 1 of 7)
Story.
View Quote
The video from May 2016 shows the deputy changing lanes nine times and turning on his emergency lights to go through two intersections.He was pursuing a red car that was suspected to be related to a felony case, but ignored three radio commands when he was told to step down.
View Quote
The victim, now 61-year-old Harry Deshommes, was seriously injured and rushed to St. Mary's Medical Center where he had to have his spleen removed. His injuries also included a skull fracture, traumatic brain injury, and a broken arm, ribs, back and pelvis. His memory has also deteriorated.
View Quote 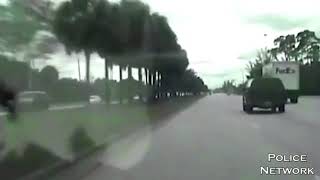 Deputy Crashes Into a Smart Car at 100 mph
https://www.youtube.com/watch?v=fKkkyjnEM0Q