If you go downtown in Manhattan to the offices of the old J. P. Morgan firm at the corner of Wall and Broad, you’ll see the pocked-marble scars of the first blow that terrorists struck at America’s financial heart, the Wall Street bombing of 1920. The country recovered amazingly well from that outrage, although no one was ever brought to justice for the crime, which was, until the Oklahoma City devastation, the most deadly terrorist attack in American history. On the very next day following the explosion, the Stock Exchange and curb trading resumed, however shakily. "Like a strong man who sticks to the line after binding up his wounds and sewing on his wound stripes," reported the New York Sun, "Wall Street, from its lowly office boy to its most stately financier, went to work yesterday morning with head up and teeth set, determined to show the world that business will proceed as usual despite bombs." At noon on the day after the attack, September 17, New Yorkers came by the thousands to the bomb scene to show their defiance and exorcise their fears. An event honoring "Constitution Day," the 133d anniversary of the document’s adoption, had been previously scheduled for that day in the area near the George Washington statue, which was surprisingly undamaged by the blast. The small celebration swelled into one of the largest gatherings in Wall Street’s history. The crowd sang "The Star-Spangled Banner" and listened to speakers defy the nameless radicals responsible for the bomb.

Twenty-four hours before, just after noon on September 16, 1920, a horse cart filled with dynamite and sash weights had exploded in front of the Assay Office, near the intersection of Wall and Broad, killing 30 people instantly and injuring about 300 others. (Eventually, some 40 would die.) The lunch hour had barely begun, and many of the victims were messengers crossing the street or clerks hit by shattered glass as they ate at their desks. The hundreds of pounds of sash weights acted like shrapnel. One piece of iron was blown to the thirty-fourth floor of the Equitable building; canopies burned and windows broke a quarter-mile away. "I saw the explosion, a column of smoke shoot up into the air and then saw people dropping all around me, some of them with their clothing afire," the head of the Stock Exchange’s messengers, Charles P. Dougherty, told the Sun. The Exchange closed within a minute of the explosion, for fear of the falling glass, which might have seriously injured the hundreds of traders caught inside if it had not been deflected by the building’s big silk curtains. "I first felt, rather than heard the explosion," an eyewitness reporter for the Associated Press recalled. "I dodged into a convenient doorway to escape falling glass and reach a telephone and call the office. Looking down Wall Street later, I could see … a mushroom-shaped cloud of yellowish green smoke which mounted to the height of more than 100 feet, the smoke being licked by darting tongues of flame."

Outside, said a visiting coal magnate, glass covered the street like a snowstorm; wounded people and severed body parts lay scattered everywhere. The blast, which witnesses said tossed a nearby automobile 20 feet in the air, also stove in the offices of J. P. Morgan, just across from the bomb cart, decapitating the firm’s young chief clerk, William Joyce, who had been seated near the front. Morgan himself was vacationing in Britain. "This bomb was not directed at Mr. Morgan or any individual," said the chief of the Secret Service, William J. Flynn. "In my opinion it was planted in the financial heart of America as a defiance of the American people. I’m convinced a nationwide dynamiting conspiracy exists to wreck the American government and society." Whether or not the bomb had been aimed at Morgan, the estates of Morgan, Rockefeller, and other prominent men of the Street were now put under guard.

Two charred horse hooves, the only whole pieces of the horse or the wagon, landed at the foot of Trinity Church, into which a number of the wounded had struggled, seeking refuge from the fire and acrid smoke. Detectives carried the blackened horseshoes to 4,000 blacksmiths along the Atlantic seaboard but came up only with the recollection of an Elizabeth Street smith, Dominik De Grazia, that he had recently changed a shoe for a "Sicilian"-accented driver. Ten tons of broken glass were carted off to police headquarters, where they were panned for clues and kept for two years. Then, as now, most Americans held a particular ethnic picture of a terrorist; at that time, it was based on the Italian and Russian radicals credited with bombings over the previous 10 years in Los Angeles, Chicago, New York, Boston, and Washington. A tremendously ambitious terror scheme—in which 36 bombs were mailed to wellknown Americans in Gimbel Brothers boxes to be opened on May Day 1919—had nearly succeeded. Half the packages reached their intended targets, while the rest were discovered in a New York City post office. 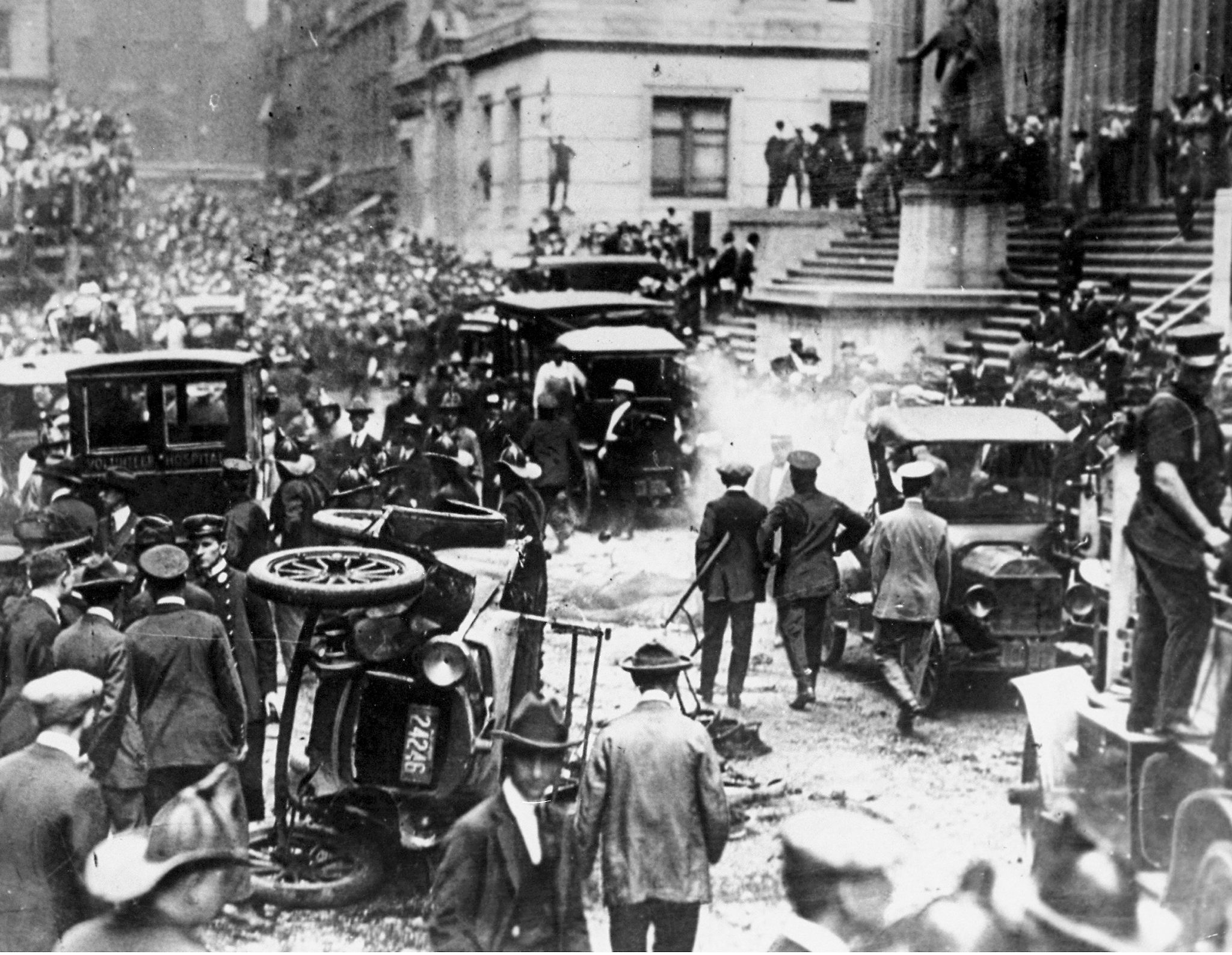