From April 29 to May 4 in 1992; Los Angeles was ablaze. Rioting and looting was in the streets. Homes and business were burglarized and destroyed by arson. The law abiding and honest people and business owners were mugged and beaten. the LAPD pulled out and told folks they were on their own. But a small section of Los Angeles known as Koreatown didn't burn. (For those that don't know; Koreatown is the most densely populated district by population in Los Angeles County, with some 120,000 residents in 2.7 square miles.)

Why? Because the Korean shop owners banded together and exercised their 2nd Amendment Rights and protected their property, their businesses, and their livelihoods. Here are some of the actual news reports from the riots. 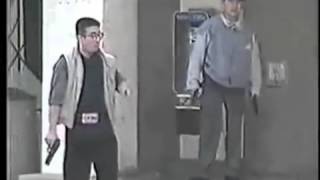 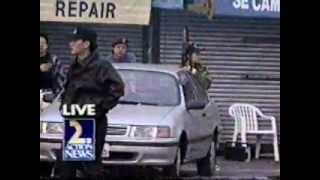 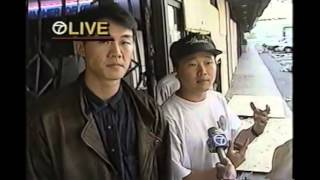 We had to bear arms
https://www.youtube.com/watch?v=ZUQhs-UzYgU

They were well armed and defended themselves. Let's take a look at some of the guns they used. Two Korean Americans take cover behind a forklift during an exchange of gunfire between store owners and looters.

First off we have a GLOCK and what appears to be a stainless 1911. This was back in 1992, so the GLOCK more than likely is the Model 19. The .40 S&W while just introduced; was more popular in the law enforcement market than the civilian market. The G17 and G19 were hugely popular on the civilian market and sold quickly. At this point in time, the Clinton AWB didn't happen yet, so the 17rd and 15rd mags were easy to get. What appears to be a 1911 actually isn't. It is actually a Colt Double Eagle. They were a 1911 Slide and Barrel on a Double Action frame. Made for a short period of time. They were chambered in 9mm, .40 S&W, .45 ACP, and 10mm Auto. They had a number of issues and were quickly pulled from the market. The most common one made was a stainless .45 ACP 5 model. So this is more than likely that. They used standard 1911 magazines. They were Colt's answer to the Sig Sauer P220 and the S&W Modle 4506/4566 line. Korean supermarket employee returns fire from drive-by shooters at the corner of Western Avenue and 5th Street while attempting to protect the market from looters.

This gentleman is shooting what appears to be your standard period Colt Model "1991 Commander". It came from factory with G.I Sights and a Ring Hammer. These used the Series 80 safety block and came with a stainless barrel. They were a more affordable option from Colt and were popular back then. Al Pacino famously used one in the L.A. Crime Drama Heat as Lieutenant Vincent Hanna. Store owner Richard Rhee stands vigil and armed on the roof of his grocery store.

Here you have a blued Colt Government Model .380 and an equally impressive period cellphone. Specifically a black Motorola DynaTAC commonly known as the "Brick". The Government Model .380 was part of Colt's .380 Conceal Carry line back before the .380 Pocket Pistol market took off with the Kel-Tec P3AT and the Ruger LCP. It was the "full-size" .380 pistol. Colt had the smaller single action Mustang and the double action only Pony Pocketlite. When Colt went into financial hardship, production ceased. Here we have a Korean store employee armed with a Norinco made MAK-90 AK pattern rifle. The fully enclosed front sight hood is the give-away. Norinco Type 56s and MAK-90s had them while your Eastern European and Egyptian made guns had the standard winged sight protector instead. Also there is the George Bush Import Ban compliant thumb-hole stock. And of course is the ever classic "shoot me" safari/photo vest and the period fanny pack which is clipped straight onto his belt loops of his pants. Armed volunteers take position behind cabbage boxes as they guard California market from approaching looters during the second day riots. Personal hunting guns were also employed. Traditional box lock Over & Under shotguns and a Remington 700 bolt action. Sure, the O/U ain't "tactical" but it is better than foul words and mean stares. Besides, 00 Buck even from one of those is liable to ruin someone's day. The bolt action rifle is a might useful to provide over-watch. This security guard is armed with the ever classic Wheel Gun. Either a Smith & Wesson K-Frame Service Revolver or a Taurus Clone. I'm leaning towards the Taurus due to the half lug on the barrel and it being a blued finish. The blued S&W K-Frame in .38 Special had an exposed ejector rod like the Model 10 and the only .357 Magnum K-Frame with a half lug like that was the S&W Model 66 which was stainless. Taurus did a K-Frame clone just like the one shown in a blued finish, with a half lug, and came in either .38 Special or .357 Magnum. This being the early 90s, the Intratec TEC-9 was an extremely popular (if misguided) pistol. Designed by Swedish George Kellgren (current owner and lead designer of Kel-Tec) in 1985. It was a huge seller and stayed in production even during the Clinton AWB. They went through three designs. First an there was an the KG-9 and KG-99. Which had an open-end upper receiver tube where the bolt, recoil springs, and buffer plate were held in place by the polymer lower receiver frame. This design only allows for 115 grain 9mm ammunition, and if a heavier grain ammunition or hot loads are used, the lower receiver would fail. Then you had the TEC-9, which solved the issues of the KG series and came from factory with a threaded barrel. Then when the Clinton AWB was passed; you had the AB-10. Which was the post ban version.

The gentleman behind Mr. Joo is holding a Remingotn 870 with a Remington LE Overfold Stock. Here we have Korean American carrying a chrome finished KG-9/KG-99 as the LAFD is attempting to save a building. And here is another standard TEC-9 being held as someone listens to the news on the radio. Korean store owners and employees watching from the roof. A Korean man carries an rifle to prevent looters from entering a grocery store .

Last but not the least, is a Korean American armed with a Daewoo K1. It is actually a South Korean design and built rifle still used to this day by the ROK Army. It is direct impingement like an AR-15 and uses standard AR-15 STANAG pattern magazines. Chambered in 5.56x45mm. Entering service as a replacement for the M3 "Grease Gun" SMG; it was designed with an 11.5 barrel and a small flash hider like the Colt XM-177 Carbines from Vietnam. For the American Civilian Market; Daewoo made it with a 16 barrel where the flash hider was part of it. Sold into the US until George Bush Import Ban; it was sold under two marketing names by the various importers that brought them into the country. They were marketed as the Daewoo K1A1 Rifle and the AR-110C Carbine. They were priced to compete against the Ruger Mini-14  but had the features and quality hat rivaled a Colt SP1 AR-15. They sold very well. All in all, there was the period pieces that were common back then. AR-15s were just not on the radar yet as the "GO TO" gun. They were pricey and had a number of competitors that beat them. You had the influx of Norinco made AKs which were priced around $250, SKS Carbines going for under $100, Daewoos and Mini-14s directly competing at the same price point, and you common hunting guns. In the handgun side of things. The Revolver was still holding strong. GLOCK was gaining ground while the other Wonder Nines of the era like the Beretta 92, S&W Model 5906, and Sig Sauer P226 were selling like hot cakes. Then of course you had the classic 1911 still holding it's own while being dealt a blow with the US Army adopting the Beretta.

But just like today, you have Americans defending their property and income with the best they could get their hands on. And the common thing shown is that even then, folks knew and understand that when the fecal matter impacts the oscillator. You're on your own and you have to deal with the problem yourself. Because the government sure won't.