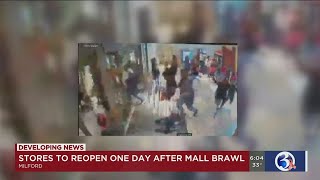 
Major fights broke out at a Connecticut mall, forcing authorities to shutter the shopping center hours early, according to police and new reports.

The fights — involving “in excess of a couple hundred” people — broke out around 6 p.m. Thursday at the Connecticut Post Mall in Milford, where panicked shoppers streamed out three hours before its usual closing time, police told local outlet WTNH.

“This whole situation was crazy,” New Haven resident Monae Moye told the station. “They were fighting in the food court… All I saw was somebody, they swung and hit somebody in the head and that person just fell out. It was like they hit them so hard, it was so crazy.”

Milford Police tweeted that “several fights” prompted the closure and that multiple police departments responded to help contain the chaos.

“Because the safety and security of our shoppers, employees and retailers is our top priority, we worked closely and in full cooperation with Milford PD and other local law enforcement to clear mall common areas,” mall officials said in a statement issued to the station.

“We will continue to work diligently with local law enforcement to prevent future incidents. We are reviewing our policy regarding juvenile patrons and will make any necessary modifications needed to provide a safe and comfortable shopping environment.”

Despite speculation on social media that shots were fired, police spokesman Officer Mike DeVito told The Connecticut Post that wasn’t the case.

There was no immediate word of injuries or arrests.

The Westfarms Mall in Farmington also saw several fights break out Thursday night, leading to the arrest of two people, but the mall remained open, according to the report.

Thursday’s fracas occurred exactly a year after cops arrested one juvenile following several “disturbances and altercations” at the Milford mall, the outlet reported.