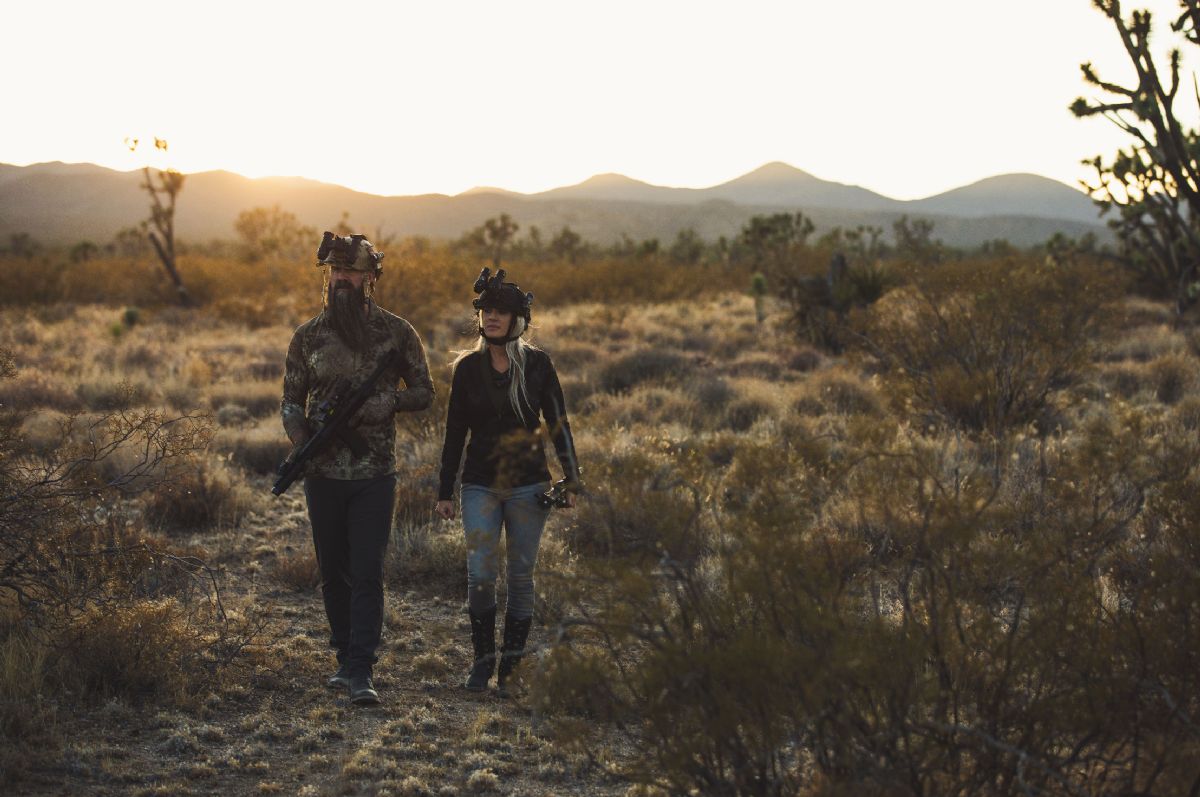 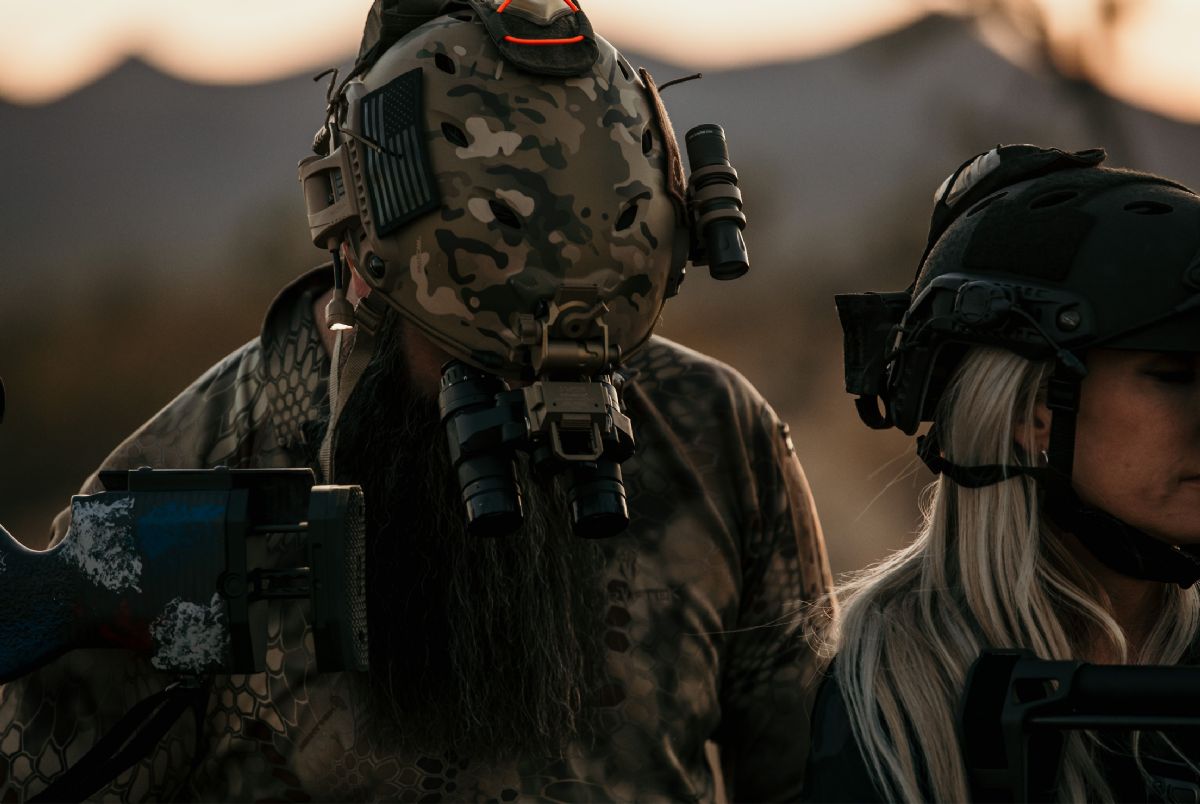 Like the YOTE Monocular, the OSSABAW is a high performance Night Vision Goggle (NVG) that can be used hand-held or head mounted. Unlike the YOTE Monocular, however, the OSSABAW is a Dual Tube NVG, meaning that it uses two (2) image intensifier tubes, to provide each eye with an aided image that improves depth perception and image quality by allowing the user to take advantage of true stereoscopic vision. This also makes it ideal for driving and maritime applications where depth perception, situational awareness, and reaction time are of critical importance.

The OSSABAW DTNVS14P uses the same ubiquitous AN/PVS-14 optical lens assemblies originally designed for military use and features Photonis ECHO "ONYX" White Phosphor Hybrid Photocathode image intensifiers uniquely suited to the needs of recreational night vision users. The Binocular housing is likewise based on proven architecture with a highly durable polymer housing manufactured by ACTinBlack of Luxembourg and an international leader in high performance optical systems. The DTNVS14P housing features independently articulating optical pods that allow the device to be adjusted for individual users eyes, as well as a monocular cut-off for stowing the system when the optical pods are rotated all the way out, providing extra security during storage or when being stowed when worn head mounted. The DTNVS14P housing also features an industry standard "dovetail" interface shoe allowing it work with common head harness and helmet mounts such as the Wilcox G24 NVG Mount. 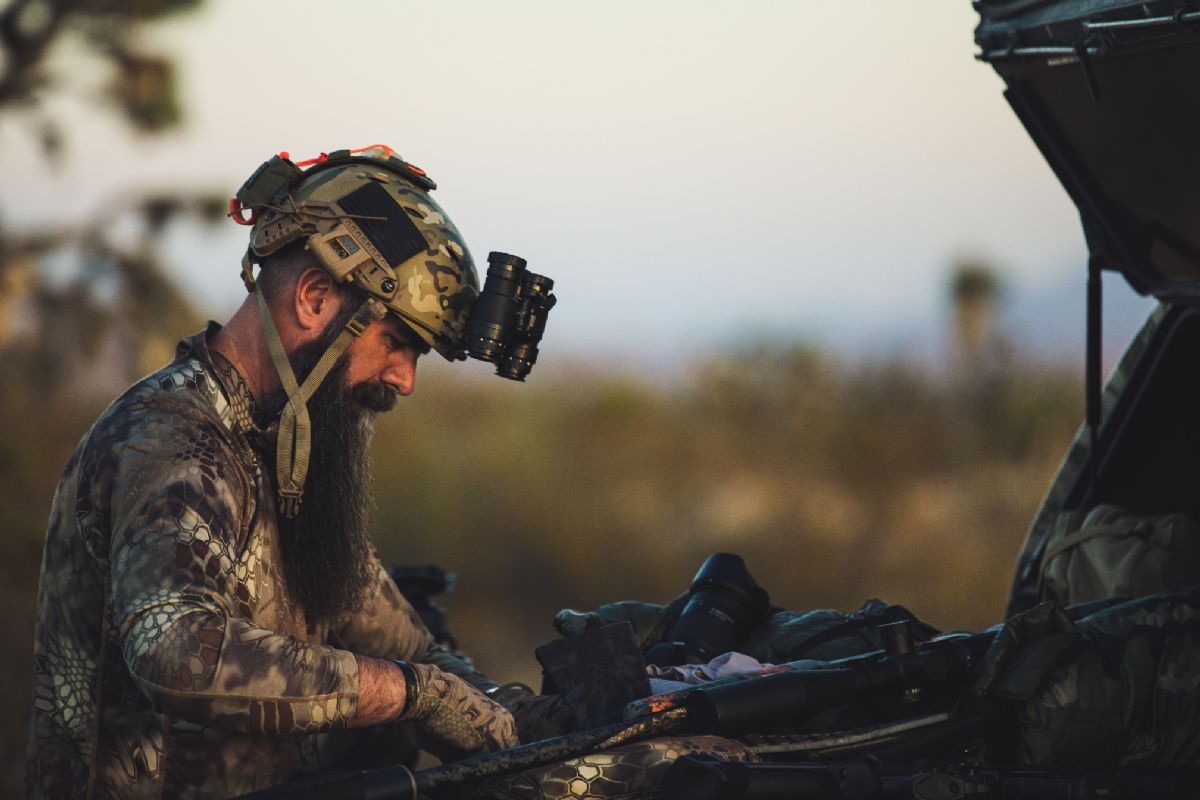 There has always been a significant overlap between products designed for defense applications and those used by outdoors enthusiasts and many products have moved back and forth between outdoor enthusiast communities and the defense sector. NGI, our focus has always been on tailored solutions for specific customers, and we realize that while many defense-oriented night vision products can be applicable to recreational uses, there has not existed many specific solutions for the outdoor enthusiast community.

The NGI Outdoors OSSABAW DTNVS14P is named for the heritage pigs that occupy the Sea Isles of Georgia and South Carolina, the ancestors of the Ossabaw hog were first released in the 16th Century by Spanish explorers and one of the few remaining descendants of Iberian pigs that have not been hybridized and intermixed with other varieties over the years due to their isolation.

The OSSABAW DTNVS14P is ideal for any user who wants to improve their ability to see in times of darkness while reducing the amount of visible light pollution, especially important in remote areas and in sensitive nocturnal ecosystems that could be disturbed by the use of visible light. The DTNVS14P has an approximately 30 hour run time using a single lithium CR123 battery, being both more efficient and more environmentally friendly than battery-hungry flashlights that can disturb others’ natural night adapted eyesight. The Dual Tube configuration provides the user with true stereoscopy, greatly improving depth perception and visual response--there is a reason that so many nocturnal animals have strongly binocular vision, and with the OSSABAW DTNVS14P, you can have it too. The OSSABAW is equally at home on camping and overland trips and for close-to-shore boat navigation, and can expand the available research and observation opportunities for naturalists studying and observing nocturnal wildlife. 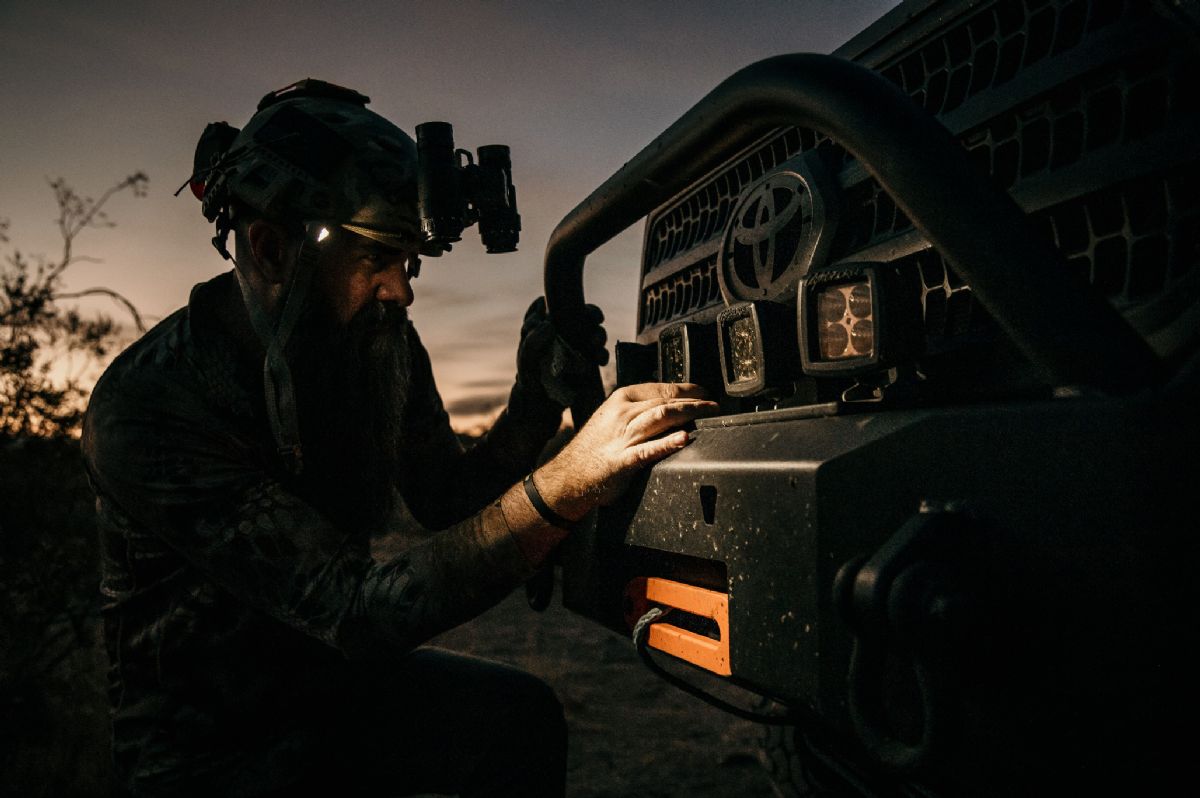 The Photonis ECHO Hybrid Photocathode image intensifier tubes used in the OSSABAW produce a cooler image than the image intensifier tubes preferred for defense and tactical applications that can be more comfortable and more pleasing to some users. The ECHO tube also features excellent high light resolution when used in conjunction with NIR illumination such as the built-in NIR illuminator on the DTNVS14P, the NGI TORCH PRO MKIII handheld illuminator, or LightforceUSA NIR lighting solutions. The ECHO tubes also feature a narrower dynamic range that is better suited to night vision photography. Since the OSSABAW DTNVG14P utilizes the same AN/PVS-14 optical lenses as the YOTE monocular, it is also compatible with the TeleVue FoneMate universal smartphone adapter, allowing users to easily take night vision photographs with their smartphones.

While traditional defense applications emphasize stealth and covertness with maximum extreme low light amplification to reduce the amount of active NIR emissions that could be detected by similarly equipped adversaries, this can sometimes mean that they produce an image that some perceive as too bright and overly harsh, especially under normal ambient lighting conditions and with IR illumination and can wash out digital cameras used for night time photography. 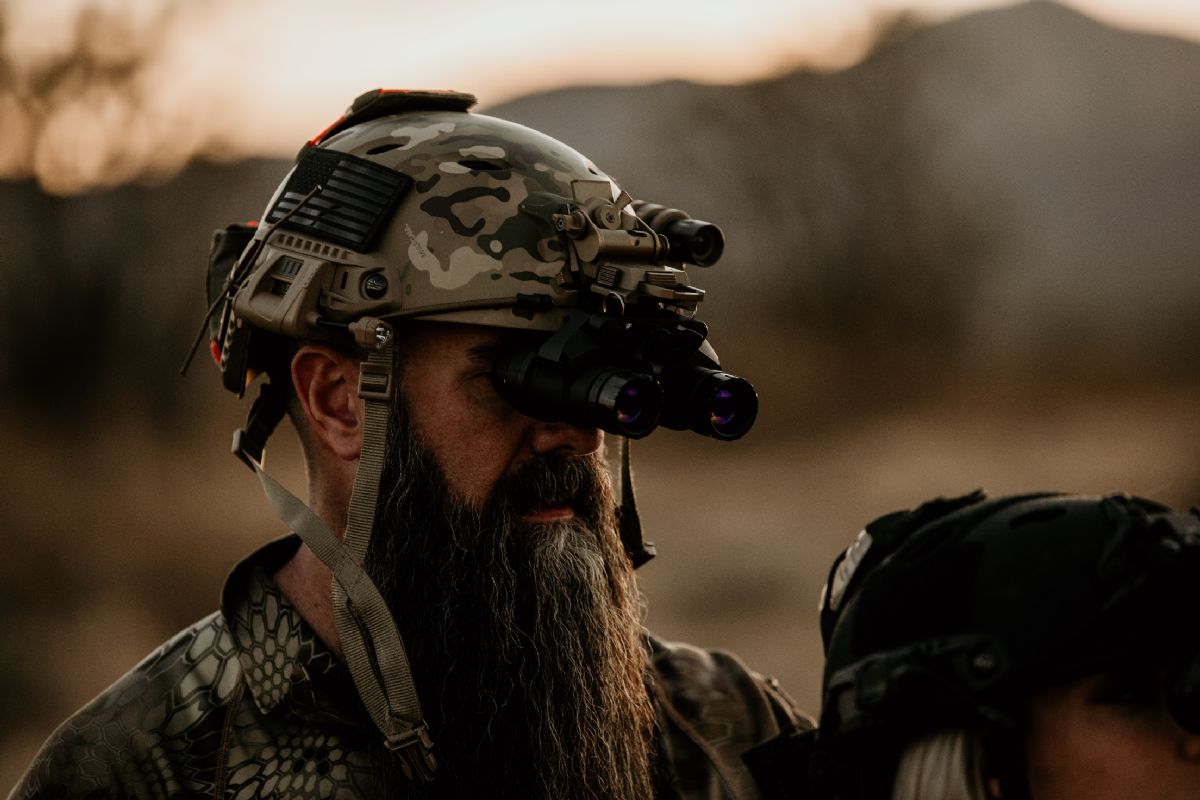 While the OSSABAW DTNVS14P uses a Photonis ECHO Hybrid Photocathode Gen. 2+ image intensifier tube, it is otherwise identical to other TNV/ and NGI/DTNVS systems and built in accordance with military specifications, using a durable polymer housing and military-quality optical lens assemblies and is built in-house to the same rigorous quality control and quality assurance standards as equipment issued to military forces and is backed by NGI Outdoor Systems' Lifetime Limited Warranty*.

The Photonis ECHO Hybrid Photocathode uses the same technological infrastructure as Generation 2 image intensifier tubes making them a Gen 2+ tube, however, Photonis has pushed the boundaries of the Gen 2 architecture to produce some of the very best tubes on the market for outdoor adventure enthusiasts at a significantly lower cost than similar performance Gen 3 image intensifiers. 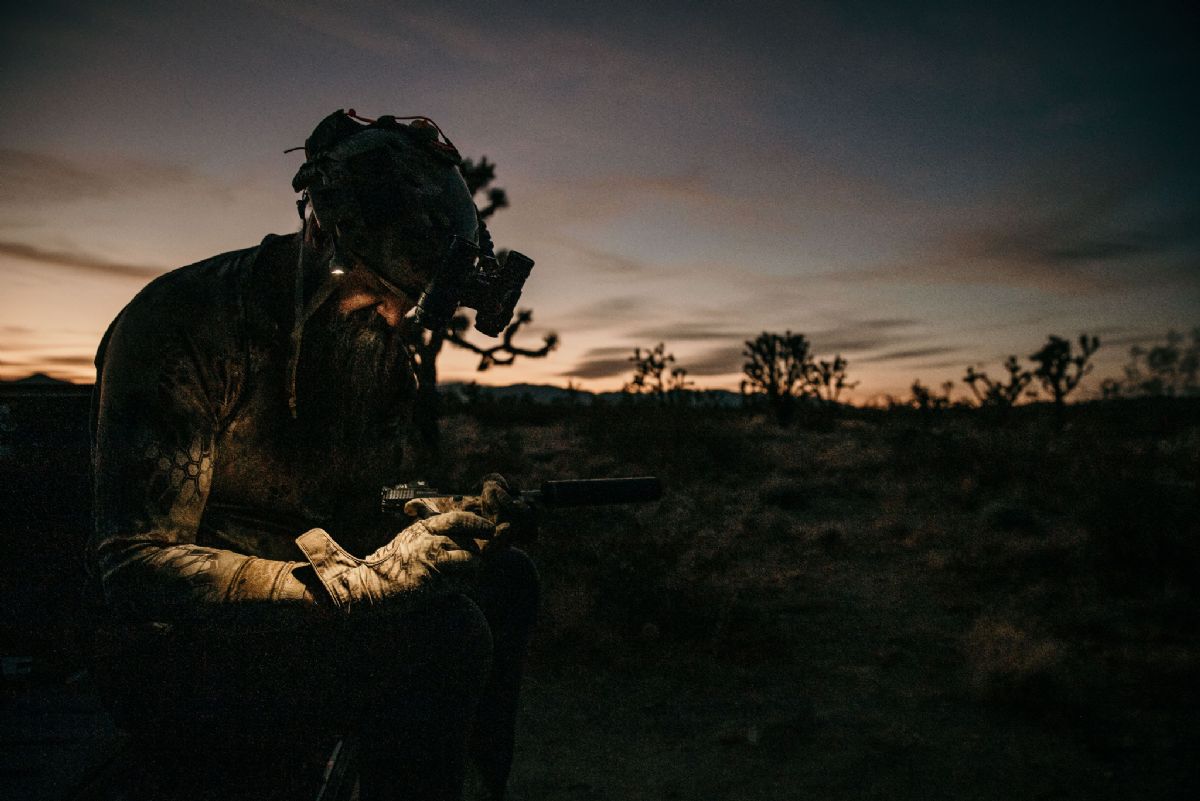 The DTNVS14P is based on high performance image intensifiers designed for defense use, and therefore is regulated under ITAR and cannot be sold, exported, or otherwise taken outside of the United States without express permission from the US Department of State. Failing to abide by ITAR is unlawful and can result criminal charges, fines, and/or prison sentences.
Night Goggles Inc, Director
909.312.5424 [email protected]
www.nightgoggles.com
Night Goggles Outdoor Systems Photonis 4G ECHO WP OSSBAW DTNVS Bino!