[ARCHIVED THREAD] - My First Build - 2 years in the making (picture heavy) - NOW with Range Report
On 21 April 2010, I ordered my stripped lower receiver from Spike's Tactical.

Over the next couple of months, I picked up a LPK, buffer assembly, butt-stock, a couple mags, and a bunch of ammo (picture is just some that I got, I tried buying at least one box of everything out there.) 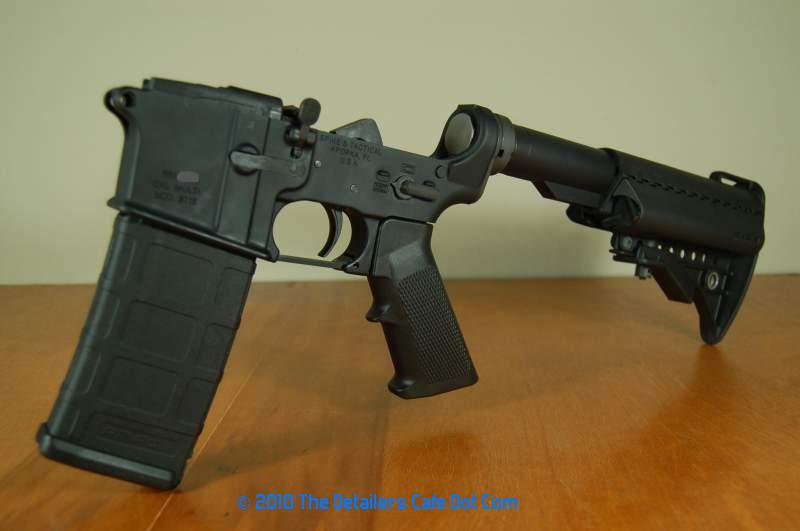 (Yes, I know the castle nut is backwards.. took me a while to figure out why my stock wrench didn't work)

Things got tight, and I got indecisive. I eventually decided I wanted a Spike's 16" middy and would just buy a complete upper. Well, several months later, and not enough money to buy a complete upper, I was ready to give up. I ended up selling my buttstock and MBUS, along with about 200 rounds of ammo. A while later I shipped off to basic training. I've been home for a while now, and decided I'm just going to build the upper myself. I started off by buying a piece at a time. Then tax time came and my wife OK'd buying the rest of my parts.

I ended up trading a scope I had on my 30-30 for a small lot of parts that I'd need. I got a MIAD grip, forward assist assembly, charging handle with Badger Ordnance Tac Latch, 2 Mags, and a 3-point sling.

I also traded my stock wrench plus some cash for a new Matech.

I got a lot of furniture on the EE for 30$, including an M4 stock, Carbine length handguards, and extras. Around the same time, I purchased an ejection door, delta ring assembly and front sight post assembly.

Since my MIAD only had one set of straps on it, I found a set on the EE for 8$. I ended up with the B2 back and A1 style front. Similar to a MOE grip now. I had to modify the B2 to fit my lower, but it was easy and looks good.

After saving up a bit, I got my barrel assembly. It's a DSA 14.5" with chrome-lined chamber and bore, and 1:7 twist. I hadn't heard much about DSA at this time, but for $150, I couldn't justify spending close to $300 for anything similar.

Tax time came, and I got to order the last of my parts and supplies. First up is my BCG from LaRue. I was very pleased with the entire experience with them. Here's my order. And here's what they sent me

I also found a KAC VFG on the EE for cheap, and since I wanted to try one out, I went ahead and got it. I bought a little MOE rail section at my local gun shop and it fit right up.

A few days after my BCG showed up, the rest of the stuff I ordered arrived.

As mentioned, I decided on a 14.5" with a perm-attached muzzle device. I opted to do it myself with silver solder flux paste and a torch. This worked out perfectly, and I have enough supplies left to do it probably about 50 more times. All of the materials cost me about 30$, the same price most shops charge to drill and blind pin weld. I didn't want to do the blind pin because - you basically have to destroy your muzzle device to get it off, and I plan to take this one off eventually to add a free-float rail and possible lose the A2 sight tower. We'll see.

As you can see, I ended up with slight discoloration on the actual flash hider. I attribute this to the finish on the device, as the barrel and crush washer were virtually unchanged. It looks pretty decent with a little CLP on there, and without actually inspecting it, it's hard to tell.

I was originally planning to go with an Aero Precision upper receiver, because I liked the little flag logo on top. Well, for one, you wouldn't be able to see the flag with a BUIS on there, and Surplus Arms and Ammo wanted 14$ to ship it. So, I ended up with a DSA upper from AIM Surplus for 53$ shipped (mil discount, free shipping.) The match is pretty decent with my Spike's lower. The DSA is more matte than the Spikes, but it really doesn't bother me. They fit together pretty well. More importantly, the M4 cuts in the receiver match up perfectly with the M4 cuts in the DSA barrel extension. Very happy about that.

This thing was so much fun, and such a learning experience. I really wish all guns could be built from home. Total cost to me according to my spreadsheet was $704. Add in shipping and all that, and it probably ran me closer to $750-760. Still, I'm very pleased with my rifle, and I can't imagine doing it differently in the price range I stuck to. I'm really looking forward to sending some rounds down range. It'll probably have to wait until next weekend, which is a bummer.

Apologies for such a long post. I almost did a video/pictorial walk through on the muzzle device, but it was so simple and I was feeling pretty lazy when I did it.