[ARCHIVED THREAD] - Magpul's New Polymer Formula is Sub-par - Worse than the old Gen!!!! (Page 1 of 2)
I've always liked Magpul, for obvious reasons.  They make high quality innovative products at affordable prices.  I've thought the pmags were great, esp the window'd version.  Very novel ideal.  I had a fair amount of pmags before the panic started in December, but decided it was prudent to order more just in case.  After a month or so, I received my Gen 2 window'd pmags.  However, these were not the same ol Gen 2s....  Since last year, Magpul has introduced a new polymer formula into their mags.  The same type that they are using with the new Gen 3 mags, even the Gen 2s are being molded with this new polymer.

A new stronger formula, I thought it was great!  It seemed sturdier / stiffer than the older Gen 2 Pmags made from the old formula.  For the hell of it, I decided I'd do a drop test on this new polymer forumula.  I had done plenty with the old polymer Gen 2s, and had always had great results.  However....such was not to be the case with this new Pmag!!

During my own initial mag trials where I put several different types and brands of magazines to the test, I had use a flat rock embedded into the earth to perform drop tests on.

Here is the rock 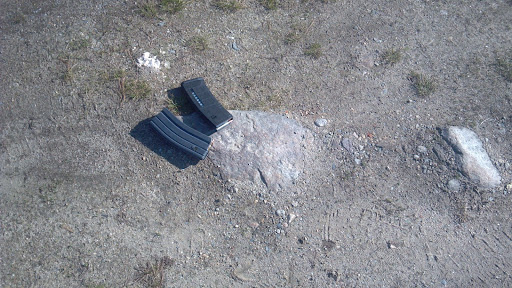 I would hold a fully loaded magazine upside down head high (~6 ft) and drop it straight down on the rock.  The old pmags would develop a hair line crack after the initial drop.  Repeated drops would cause the crack to spread and open up more. 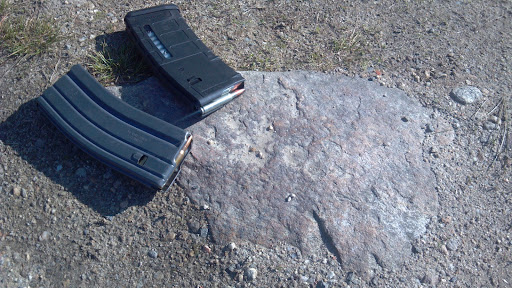 I performed the same test to this new Gen 2 Window'd Pmag with the new stiffer polymer formula.  My initial impression after seeing the drop was positive.  Unlike the older Pmag, NO ROUNDS spilled out after impact.  The old Pmags would always have 2 or so rounds spill out after a direct drop on the feedlips.  However, what I saw next, quickly wiped away my satisfaction.

There was a LARGE CRACK in the spine of the Pmag.  Not just a hairline crack, but a large GAPING crack.  A crack that size, would have taken multiple drops on the rock with the older gen 2 pmags.  This mag cracked like a fissure after only ONE drop!!! 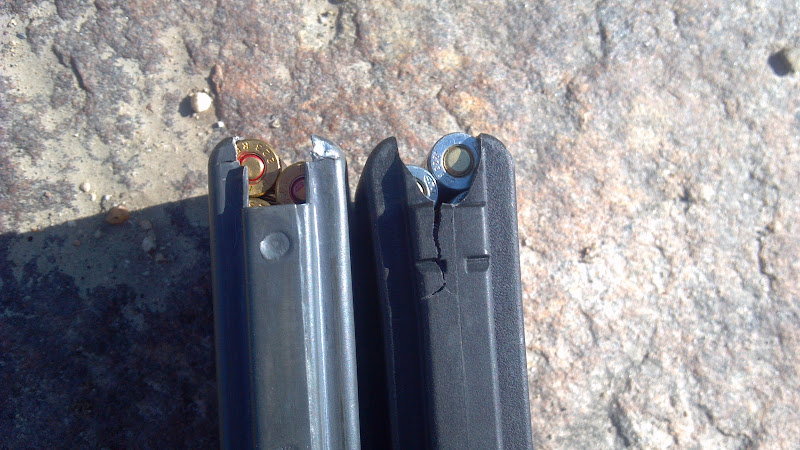 Both Mags after the Rock Drop Test

For the sake of it, I used my well used and abused Brownell's 30 round USGI magazine with the tan follower.  This is THE exact same mag that I used in my prior mag endurance trials 3 years prior.  This mag has been to hell and back, and still works.  This mag has been beat up so much, that the front portion of the follower had broken off!  I had performed multiple drop tests on this very same mag, even the rock drop test which I performed on this mag more than once. 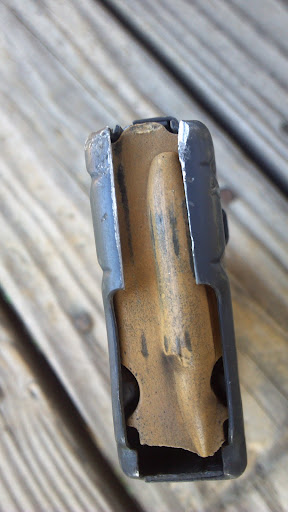 I decided to fully load it up and drop it on the rock again.  The already beat feedlips looked even more beat.  However, it still fed and functioned fine!

The Pmag is now ruined....after ONLY ONE DROP!  It will no longer hold a full 30 rounds.  The crack is so large that the spring will force rounds out when the mag is close to fully loaded capacity.

This is very disappointing to say the least, and I hope magpul takes much needed steps to fix this problem.  It bothers me greatly that Magpul is now using a sub par polymer formula for their magazines.