Hadn't seen much on this ammo out there so I decided to put it through some of my old clear ballistics gel.

Performance wise, it seemed to work about like any other Fusion bullet in gel tests I've seen.   Retained weight was great (149gr) and the expansion was good expansion even at the lower velocities that result with a 300BLK loading especially in a 9'' barrel as I used in the test here.   FWIW, the 9'' barrel was producing over 1,700 FPS on average. 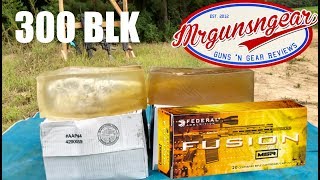