Kirsch Night Vision Chronicles Return!
8/16/2022 4:37:09 PM
Gordons Reloading Tool
Anyone used this?  Like quickload but free.  Not a lot of common US powders yet though.  Great interface:

Neat. I just wish I could switch to Freedom units.
Distinguished Rifleman #2223

"Technique isn't something that can be taught. It's something you find on your own." - Bunta Fujiwara
It's predictions for VV N32C under 130 and 150gr bullets in '06 and .308 match my velocities closely, and my estimations of pressure.
Distinguished Rifleman #2223

"Technique isn't something that can be taught. It's something you find on your own." - Bunta Fujiwara
Started using it more lately... tired of getting frustrated with the clunky interface of QL, and their insistence on shipping physical media.

GRT is definitely a moving target, though, as they do updates and such, things can change... or break... but they're pretty good about keeping things moving forward.

The OCW calculator portion alone would be worth ditching QL for, IMO.

You can switch from metric (meters per second, millimeters, etc) to Imperial (feet per second, inches, etc) with the click of a button.

Originally Posted By mgw24:
Anyone used this?  Like quickload but free.  Not a lot of common US powders yet though.  Great interface:


It has Hodgdon, IMR, Accurate, Winchester, Ramshot, Shooter's World, and many others.  A lot of them but not all of them.

I'd like to know how to get additional powders into the database.

Quote History
Originally Posted By Trollslayer:I'd like to know how to get additional powders into the database.
View Quote

I think you (or someone) would have to do some of the initial measuring, and submit the data.  Apparently some manufacturers (particularly the US-based ones) are not especially cooperative. 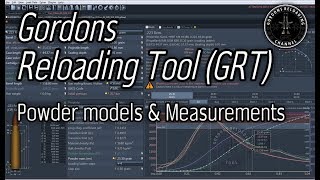 As an example... the IMR 8208XBR data is okay, but not as fully documented as others that they can get exact data directly from the manufacturer.  They've added a couple features... one, you can directly import data files from several kinds of chronographs, or spreadsheets if yours isn't on the list.  In my case, I could literally just import an entire directory of LabRadar data files, and then use their GRTLab plugin to upload it GRT where they have software set up to analyze the data.

They do *strongly* recommend using actual fired case volume, and actual measured bullet length before doing so, though.

Some people have concerns about using what is essentially 'crowd-sourced' ballistic data.  On the one hand, I get it.  On the other hand... having been on the receiving end of QuickLoad burn rate data that is so far off as to be basically unusable (e.g. Viht N150) and having to do a *lot* of tweaking to get it to work acceptably... *and* paying $150 for the privilege of doing so... I'm okay with 'crowd sourced'.

You can switch from metric (meters per second, millimeters, etc) to Imperial (feet per second, inches, etc) with the click of a button.
View Quote
That was an update this year.
Distinguished Rifleman #2223

"Technique isn't something that can be taught. It's something you find on your own." - Bunta Fujiwara
I had not noticed, this thread is a year old, a borderline zombie thread.

I just wanted to reach out and let you know that my husband Gordon passed away on January 19th 2022.

Until further notice, this site stays online. Please note that Patreon contributions have been paused.

Initially, no additional submissions should be made to the GRTLab, or Translations, as no one has access to service the data.
Therefore, it will be impossible to update Powder Models, Calibers, and Bullet to the GRT database as an official release until the possibilities of continuing Gordon's fine work are explored.

Take care!
Chrissi
View Quote
"Technique isn't something that can be taught. It's something you find on your own." - Bunta Fujiwara

Quote History
Originally Posted By HighpowerRifleBrony:
Neat. I just wish I could switch to Freedom units.
View Quote
Top menu: “View”, next to last option is “Change all units to:”.  It offers “Default,” “Metric Units”, and
“Imperial Units.”  There ya go.

Yeah, it takes some getting used to, but it’s been great for me in going beyond “this powder will work in that caliber”.  And thanks for verifying that GRT’s predictions track with your observations.

Added: One thing that takes more “getting used to” is that all the calibers that ship with the software are based on CIP standards.  Which aren’t exactly the same as SAAMI standards - sometimes by a LOT.  You can add your own calibers, though.  And usually it’s easiest to do this as “New with copy” so you don’t have to enter everything manually.