We don't have that much space available. What kind of foods can we store outside in an non-airconditioned space with the AZ heat?
Will dry stuffs handle the heat OK, like wheat, rice and beans?
What you own is your own kingdom
What you do is your own glory
What you love is your own power
What you live is your own story
"Something for Nothing" - Rush
I long ago moved everything inside, but basically you're going to want to limit yourself to freeze dried foods and dehydrated stuff.

Rice/Beans with the air sucked out and sealed should be good for a while, if not as long as if they were climate controlled.

Canned goods, I wouldn't trust as long as I would otherwise. Some of them will be fine, some won't. It's kinda hard to tell.

The easiest thing to do is always just up what you normally eat and rotate foods. If you do that with the canned stuff, you can store things in your unconditioned space and just not let them get that old. If normally you'd have 2 cans of black beans, and you add 10, you just rotate the cans.

Keep the unconditioned space as cool as possible. Put a fan in the shed to circulate air and keep it from becoming an oven in the summer and at least let it cool at night. You could also consider outright putting an AC in a shed and just setting it for a high temperature - keep the place at 90 or something. It'll cost power, but it's doable. If you're looking at a Garage storage - some are better than others at keeping the heat out. My current one is block (as is the house) so it does OK. But I've been in stick-built garages with no insulation that, well... they're ovens.

We live in Arizona... don't forget the water. Think about if you had a boil order and no power. Again, here is an easy place to rotate - just keep more of the nonperishable liquids in stock.  But also think about grabbing a barrel or something. I like the 15gal barrels, they're man-movable if not easily. And Military Water Cans - MWC's - are good here, too, and they hold up. Aquatainers and a lot of the water storage stuff you find... they just don't.

Also; think about unused space. What's behind the couch? What's under the beds? Fill that stuff up. If that stuff is already filled... can THAT stuff go into a shed? The Artificial Xmas tree won't like the heat either, but it'll handle it better than food will.

I'm currently in a pretty big house, but I wasn't always. You need to be creative.

+1 on just buying more canned foods that you already eat.  Establish your cache and then buy a new load and put it into the warm space, rotating the older stuff indoors for consumption.  People end up wasting food and money stocking up stuff that you'd never actually use short of Armageddon and letting it just spoil.

One thing I always ask people that want to prep and are interested in freeze dried foods is what is their water situation.
If you’ll have access to potable water should your tap run dry or become contaminated, then go ahead, if not then consider canned foods instead, otherwise your using up your drinking water to reconstitute your dinner.
Canned may not last 25 years or more, but you should be rotating your stock regardless.

Also, multi vitamins are a must, you could survive on the least nutritious stomach filler if you’re getting the right vitamins.
I have no useful skills, therefore I supervise.

Call sign:Radio Silence
Glen from Independence Training has gone over this a bit. Arms Room Podcast

We don't have that much space available. What kind of foods can we store outside in an non-airconditioned space with the AZ heat?
View Quote

Better yet, seal it in mylar bags with O2 absorbers. It will last longer than you do. 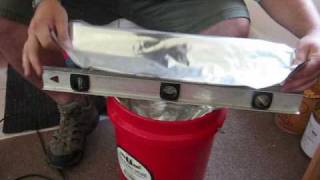 I've only gotten two warnings in almost 15 years and over 91,000 posts...and I'm an asshole. I don't know how guys rack up all these warnings and temp locks.
What are you going to do about water?
Originally Posted By Extorris:

I've only gotten two warnings in almost 15 years and over 91,000 posts...and I'm an asshole. I don't know how guys rack up all these warnings and temp locks.
Dedicate closet space for freeze dried food and gallons of water that you can keep on rotation.

Keep the stuff inside.

What part of town are you in?

Quote History
Originally Posted By mrhunter602:
What part of town are you in?
View Quote
@Mrhunter602

Quote History
Originally Posted By wingnutx:
What are you going to do about water?
View Quote
We might buy a big water container?
What is the most recommended method of storing potable water?
What you own is your own kingdom
What you do is your own glory
What you love is your own power
What you live is your own story
"Something for Nothing" - Rush

Quote History
Originally Posted By ASUsax:
Also; think about unused space. What's behind the couch? What's under the beds? Fill that stuff up. If that stuff is already filled... can THAT stuff go into a shed? The Artificial Xmas tree won't like the heat either, but it'll handle it better than food will.

Wow, very good point.  I never thought of that.  Thanks for the info, you are NOT rambling!

pS - I bought those "AquaTainers" several years ago and it didn't take long to figure out I wasted my money.  I threw one out and gave the remaining ones away.  To my mother-in-law

I live near 75th Ave and Peoria ave
View Quote

Im right off of 75th ave and Cactus.

Keep food in a climate controlled area.  Use deadspaces in your house if you can.  You can store quite a bit of food on one of those 5 shelf wire racks if you have space for it.  Under beds and in closets is good too.

Mylar and O2 absorbers are good for long term storage of dry goods but a waste of money if you rotate through it.  Vacuum sealed Mason jars are better for stuff you are going to use.

If you store dry beans long term, you will likely need to pressure cook them to soften them up so keep that in mind.

Get a chest freezer and fill it with stuff when on sale.  You don't have to buy everything at once.  Add a little extra each time you go grocery shopping.  Consider a small genny for the fridge and freezer in case of power outages.

MWC's are great and can sometimes be found for $20 each.  55 gallon drums are a cheaper option if you don't need to move it.  Water doesn't need climate control.  Just make sure to add chlorine and keep it out of the sun.

Wife and I want to get into Emergency Food Prepping