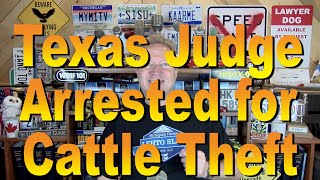 Lotsa drama in a unpopulated place
Carry it, shoot it. (repeat forever)

4:1
A week late, but this is not what most people seem to think it is.  He was not out rustling cattle out of ranchers ranges and keeping or selling them for himself.  He's a county judge, not a judge in a civil or criminal court (chief executive of the county, more like an at-large county commissioner with special powers).  Specifically, the charges are for violations of procedure set in Chapter 142 of the Texas Agriculture Code, regarding government sale of estray livestock.  That chapter lays out certain procedures that have to be followed in different cases like attempts to notify owners, holding public auction, impoundment fees, and the length of time recovered livestock may be held (https://statutes.capitol.texas.gov/Docs/AG/htm/AG.142.htm).

I know nothing about this case except what is in public news articles.  My assumption is that either he was lax in following details of the procedures or documenting how they were followed.  But pretty much all of the procedure is a burden on the county sheriff, not the county judge (with a little bit on a judge in a justice court, which could not be presided over by a county judge), so I'm not sure where he'd fit in.  Maybe he was working with the sheriff or deputies believing what they were doing was legal.  Or it's possible he was intentionally ignoring the law and rounding up stray dogies to sell for himself - but that's a lot of work and not likely to be worth the effort for someone who has a desk job.


You need to look at the price of hamburger at the store.

Quote History
Originally Posted By bradleyswine:
You need to look at the price of hamburger at the store.

View Quote
The ranchers aren't seeing a reflection of that in what they sell steers for.

My family farms and raises hogs. They have been getting hosed for years on a cost to farm versus market prices.