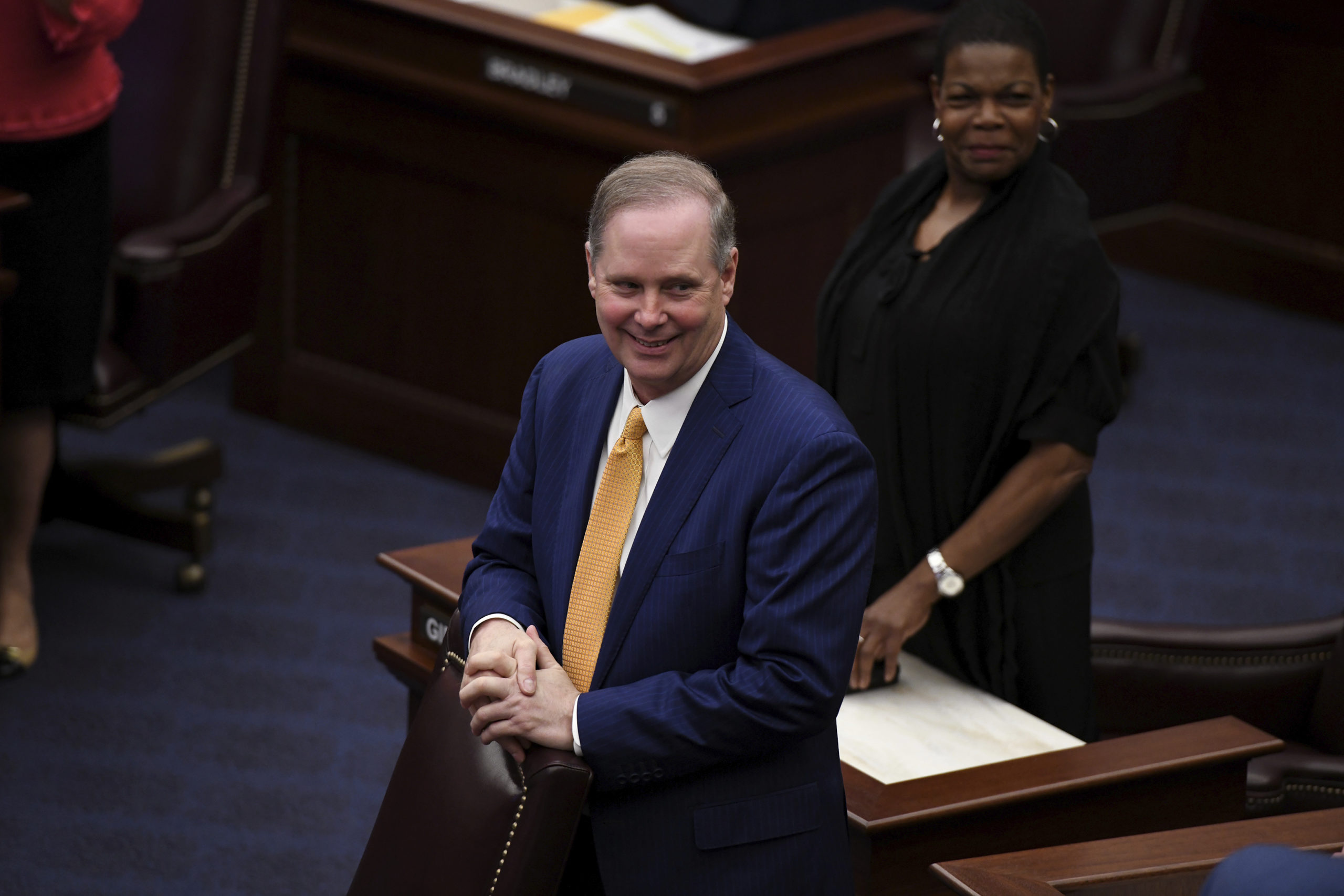 In the upcoming November, 2022 elections, Floridians will be stuck between a rock and a hard place. Florida’s current Republican Senate President, Senator Wilton Simpson has officially entered the race for Commissioner of Agriculture & Consumer Services. In the Sunshine State, that’s the office that runs the state’s concealed weapons permit program.

The seat is currently held by Democrat Nikki Fried, who is no friend of gun rights or law-abiding citizens carrying firearms. See here, here and here for examples.

So Florida is likely to go from someone in the Ag Commissioner spot who’s an avowed opponent of gun rights to one who poses as a friend, but authored the worst gun control legislation to become law in the state in the last decade.

Senator Simpson doesn’t bother to hide the fact that he authored the Parkland gun control bill, either. In fact he proudly displays it on campaign mailers (though he’s very selective about the parts of the bill he talks about). 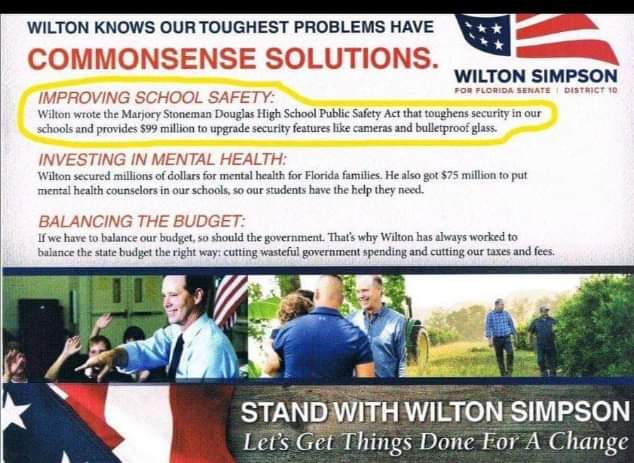 Simpson’s candidacy surprised no one in the state and he’s the favorite to win the seat. Fried announced that she’s running for governor in 2022, challenging Ron DeSantis. That will leave the Agriculture Commissioner job open.

Simpson got a big boost in his candidacy for the Ag Commissioner job when he secured the endorsement from former President and Florida resident Donald Trump.

“I hope he runs for Florida Agriculture Commissioner in 2022 — he will have my Complete and Total Endorsement!” Trump wrote. “Wilton has been a great supporter and worked hard to get many good Conservatives elected in Florida.”

While Florida’s farmers might benefit with Simpson in the Ag chair instead of Fried, Florida’s gun owners aren’t likely to. Back in 2018, then-President Trump congratulated Florida’s Republicans on their passage of Simpson’s gun control bill.

The gun control-supporting Senator Simpson is now working hard to persuade Pasco County gun owners that he’s really a big gun rights supporter…with the NRA’s help. The East Pasco Friends of the NRA have accepted a $5,000 donation from him for their event tomorrow. 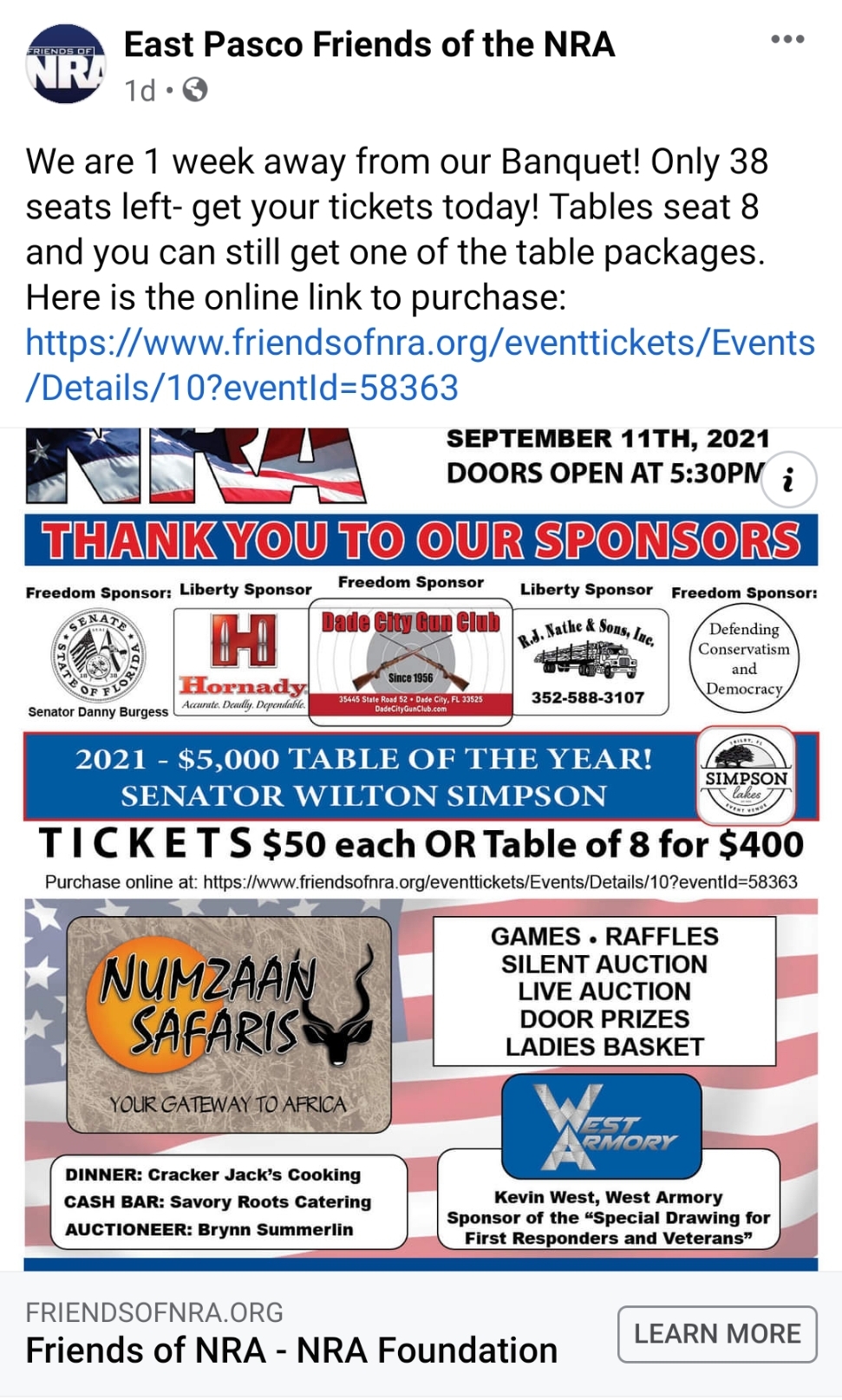 Former NRA president and current Unified Sportsmen of Florida executive director Marion Hammer is pitching in, too. In recent communication under NRA-ILA heading, she called Senator Simpson one of the “true ‘Second Amendment Heroes’ of the 2021 Legislative Session.” 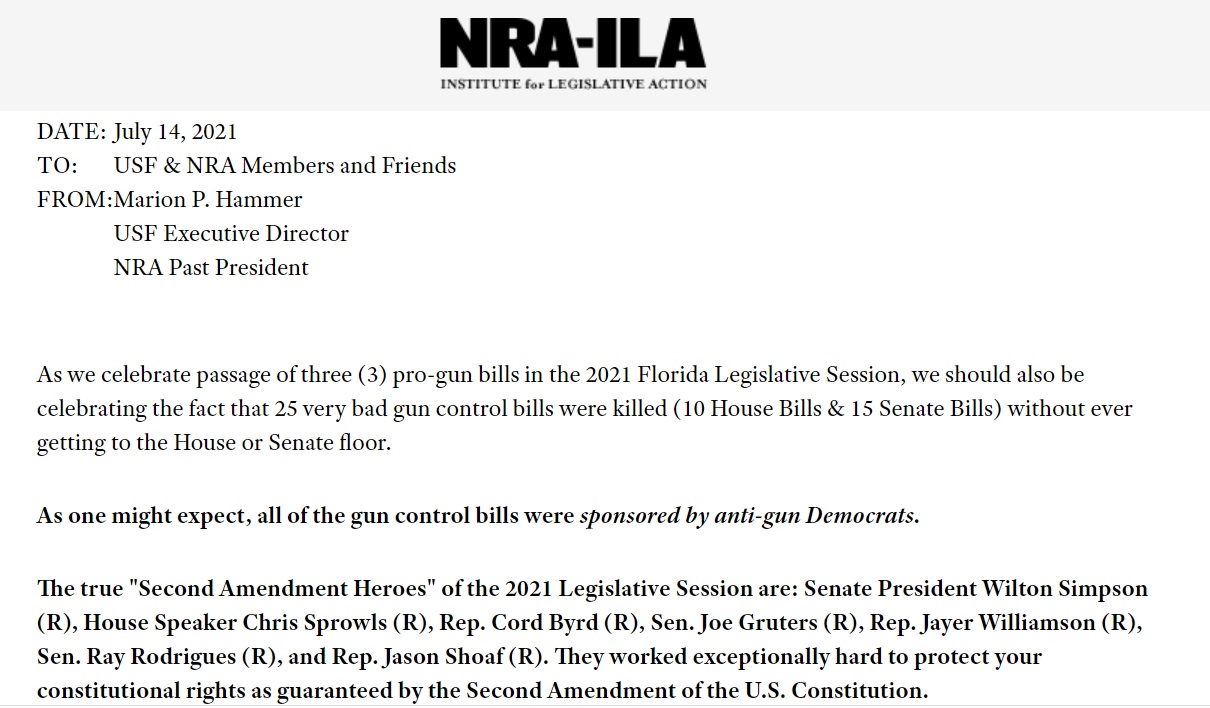 Hammer and the state Republicans celebrated the three gun rights bills they passed (and the anti-gun bills they defeated) in a legislature that is controlled by a GOP super-majority. Nothing passes — or fails to be considered — without their say-so.

Never mind the fact that the NRA is currently suing the State of Florida because of the same bill Senator Simpson authored. That bill, among other things, ended sales of firearms to adults under 21 years of age. Why is the NRA suing Florida over a gun control law on one hand and supporting the law’s author with the other?

The current chairman of the Republican Party of Florida, Senator Joe Gruters, made clear how all of this works after it was revealed that the Publix Supermarket chain resumed donating to Republicans after they announced that they’d stop donating to all politicians following the Parkland shooting.

Publix’s political contributions had resulted in protests inside some of their stores by anti-gunners looking to capitalize on the mass shooting and shame Publix into pulling its money from pro-gun politicians.

Gratified by the resumption of cash, Gruters declared Publix’s decision to resume the contributions a smart one . . .

“You can’t sit on the sidelines and think you’re going to be able to accomplish your legislative goals at the end of the year.”

Senator Gruters and Rep. Cord Byrd are counted among the “true Second Amendment Heroes” by Hammer and the NRA. Maybe that’s why TTAG contributor and the GOA’s Florida Director Luis Valdes was attacked by those with whom Hammer has influence when Valdes drew attention to what’s been going on in the state’s Republican-controlled legislature with regard to constitutional carry (and Rep. Byrd’s role in bottling it up).

What we have here are avid and skilled practitioners of the world’s second oldest profession — lawmakers using access-based lobbying as a tool to cultivate and control the way gun rights are “managed” in Florida’s GOP supermajority-controlled legislature. The NRA and USF provide cover for anti-gun Republicans who author gun control legislation and go on to kill pro-gun bills such as constitutional carry. In return they get support and donations.

Friends of the NRA events are “grassroots” campaign funding events. That’s where the local level members donate their hard-earned dollars to the NRA on the belief that the money will go to defend and extend their gun rights in the state. 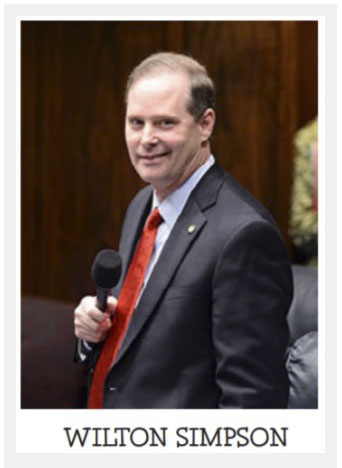 The NRA and these politicians count on the average gun owner thinking that having an (R) after heir name along with NRA backing automatically means the legislator or candidate supports gun rights. That clearly isn’t always the case.

The end result is a shady relationship whereby each side benefits financially through donations to one another and in the end, little or nothing happens in the legislature to further the cause of Second Amendment freedom (think open carry and constitutional carry). And sometimes, those freedoms are even rolled back, as they were to resounding applause in 2018.
Communism - 20th Century Mass Murder Champions
R.I.P. Edward Avila
NO COMPROMISE ON THE 2A
NewWaveFirearms.com
Gunowners.org/Join
Senate Pres. Simpson (R) Illustrates the Problem With the Slow Progress of Gun Rights in FL.