Hometown » Nevada
Permit for concealed knife carry
Any of you guys know what he’s talking about? 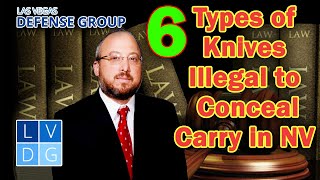 People who don't like motorcycles are just... weird.
Sadly, this guy is completely clueless and is offering services as a defense attorney. There is NO state CCW for knives. Nevada does not have that. The sheriffs do not authorize or have a separate permit system for the state. Maybe he failed to realize the laws were updated a couple of years before he made this video. Or, maybe, he is just a clueless attorney trying to drum up business with a dramatic video.

Now, there are local ordinances which can govern knives and may have chief of police of sheriff permission being required. Clark county is a prime example and I am unaware of permission ever being granted. At the same time, I am unaware of any prosecutions for carrying a knife. With the liberal DA and their common blatant refusal to prosecute most misdemeanors, I would be very surprised.

Here is NRS 202.265, which he references. Just read the first line of where this law applies and stop there.

NRS 202.265  Possession of dangerous weapon on property or in vehicle of school or child care facility; penalty; exceptions.

(a) An explosive or incendiary device;

(b) A dirk, dagger or switchblade knife;

(c) A nunchaku or trefoil;

(d) A blackjack or billy club or metal knuckles;

(f) A pistol, revolver or other firearm; or

(g) Any device used to mark any part of a person with paint or any other substance.

2.  Any person who violates subsection 1 is guilty of a gross misdemeanor.

3.  This section does not prohibit the possession of a weapon listed in subsection 1 on the property of:

(a) A private or public school or child care facility by a:

(3) Person having written permission from the president of a branch or facility of the Nevada System of Higher Education or the principal of the school or the person designated by a child care facility to give permission to carry or possess the weapon.

(b) A child care facility which is located at or in the home of a natural person by the person who owns or operates the facility so long as the person resides in the home and the person complies with any laws governing the possession of such a weapon.

4.  The provisions of this section apply to a child care facility located at or in the home of a natural person only during the normal hours of business of the facility.

5.  For the purposes of this section:

(c) “Pneumatic gun” means any implement designed as a gun that may expel a ball bearing or a pellet by action of pneumatic pressure. The term includes, without limitation, a paintball gun that expels plastic balls filled with paint for the purpose of marking the point of impact.

(d) “Switchblade knife” means a spring-blade knife, snap-blade knife or any other knife having the appearance of a pocketknife, any blade of which is 2 or more inches long and which can be released automatically by a flick of a button, pressure on the handle or other mechanical device, or is released by any type of mechanism. The term does not include a knife which has a blade that is held in place by a spring if the blade does not have any type of automatic release.


And then here is the other law he is whining about- It also doesn't apply.

1.  Unless a greater penalty is provided in NRS 202.287, a person having, carrying or procuring from another person any dirk, dirk-knife, sword, sword cane, pistol, gun or other deadly weapon, who, in the presence of two or more persons, draws or exhibits any of such deadly weapons in a rude, angry or threatening manner not in necessary self-defense, or who in any manner unlawfully uses that weapon in any fight or quarrel, is guilty of a misdemeanor.

2.  A sheriff, deputy sheriff, marshal, constable or other peace officer shall not be held to answer, under the provisions of subsection 1, for drawing or exhibiting any of the weapons mentioned therein while in the lawful discharge of his or her duties.

Yeah I figured it was BS but I’m not that well versed on NRS. I briefly searched and couldn’t find any reference to what he was talking about.

People who don't like motorcycles are just... weird.
It is very strange. The comment section talks about Clark County code, but the video does not. The video sure seems like a bunch of junk. Halfway tempted to log on with an account, comment on the video, and see if they will fix it.