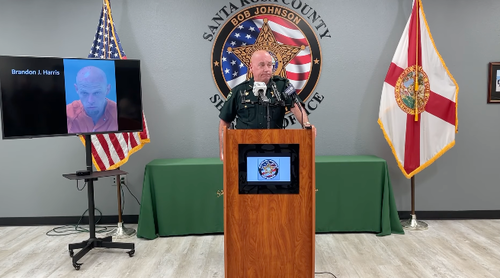 Santa Rosa County Sheriff Bob Johnson told residents they're "more than welcome" to shoot burglars after a crazed man went on a home invasion spree in the northwestern portion of the Sunshine State..

According to the Pensacola News Journal, the sheriff wasn't sure which homeowner shot at 32-year-old Brandon Joseph Harris, who has since been arrested and accused of committing a series of break-ins on Wednesday evening.

"We don't know what homeowner shot at him.

"I guess they think they did something wrong, which they did not.

"Whoever that was, you're not in trouble. Come see us. We have a gun safety class we put on every other Saturday, and if you take that, you'll shoot a lot better, and hopefully, you'll save the taxpayers money," Johnson said.

DANG! Y'all got Sheriffs that are the envy of the other 49 states!

The suspect has been arrested 17 times since the age of 13 and has been sent to prison for six-and-a-half years for a home invasion. [how'd this dude get outta the iron-cage??]

“I am the Alpha and the Omega,” says the Lord God,
“the one who is and who was and who is to come, the Almighty.”
~ Revelation 1:8
Florida Sheriff: "We Prefer" Homeowners Shoot Burglars To "Save Taxpayer Money"