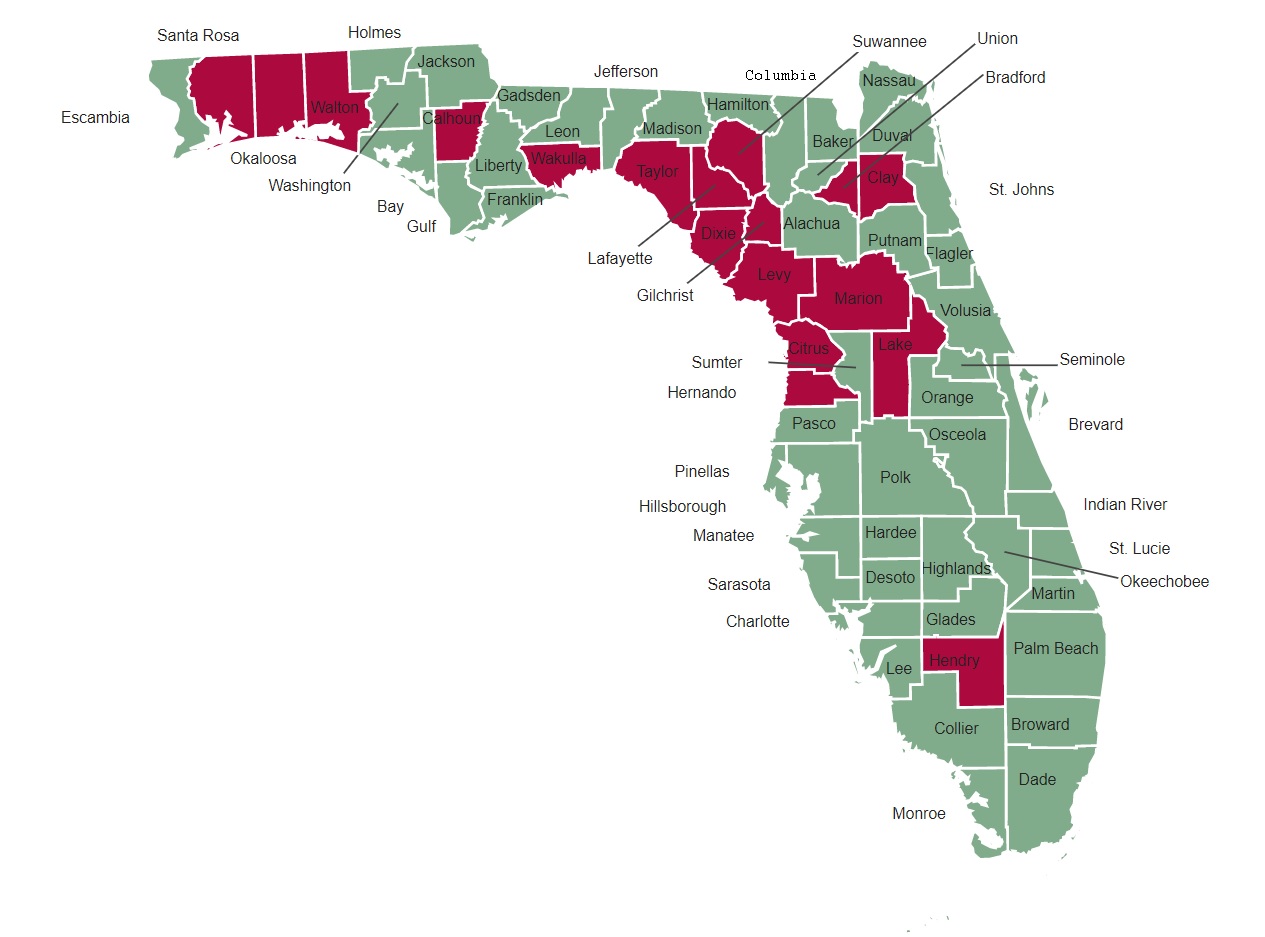 https://perrynewspapers.com/?p=25611
End the Political Establishment
Communism - 20th Century Mass Murder Champions
Keeper and Guardian of Site Resources
Passing along the news.
NRA EVC. NRA Benefactor. Golden Eagles. SAF life member.
This was posted by a conservative from his Mac... deal with it.
it's a start

stuck in Orange
Don't be so open-minded that your brains fall out.

General education should not be mere job training, but training of the mind to reason. https://welltrainedmind.com/a/classical-education/

Quote History
Originally Posted By MRW:
it's a start

stuck in Orange
Stuck in Leon. I know the feeling.
Phhhttttt... Alachua

NRA EVC. NRA Benefactor. Golden Eagles. SAF life member.
This was posted by a conservative from his Mac... deal with it.
Add Okeechobee

Apparently Polk just voted to pass this as well

Board to adopt the attached resolution which: 1) supports the right to bear arms and declares Bay County to be a "Second Amendment Sanctuary"; and 2) revises Bay County's

Workplace Violence Policy to permit employees to carry a concealed weapon or firearm where permitted by law.

An individual's right to possess a firearm is protected by the United States Constitution and the Florida Constitution. This resolution reaffirms the Commission's support for those constitutional rights.

The resolution also modifies the County's Workplace Violence Policy, which currently prohibits employees from carrying a firearm while on County property. The revised policy provides that any person who is legally permitted to carry a concealed weapon or firearm under applicable law is allowed to do so on County property, to the maximum extent permitted by law. State law still prohibits open carry of a handgun or concealed carry of any weapon or firearm at any meeting of the governing body of a local government.

Staff recommends the Board adopt the attached Resolution Supporting Second Amendment Rights. See Exhibit 1.
"Little shaken babies and drunkards seem to all agree, once the show gets started its bound to be a sight to see"
@Miami_JBT

This allows the board to protect Second Amendment rights and to oppose any efforts to violate these rights.

https://www.mypanhandle.com/news/bay-county-approves-employee-guns/
"Little shaken babies and drunkards seem to all agree, once the show gets started its bound to be a sight to see"
...
Welcome to my Underground. Help yourself to guns and ammo.

Get your chicken from Hate Chicken instead of Vibrant Chicken.
I think we're at 20 counties and one municipality.
End the Political Establishment
Communism - 20th Century Mass Murder Champions
Keeper and Guardian of Site Resources
I'm in PBC where the gun ranges are currently full of cars with NY, Mass, Conn. NJ........license plates and whose occupants are enjoying their gun rights seasonally here in Florida, but then vote for gun grabbing autocrats anyway.
Folks who've been prolific posters for years on DU and who've posted that in here they're going to vote for The Democratic Party's Candidate for President in 2020, even if it's Michael Bloomberg; have pretty much shot their load in here.

Quote History
Originally Posted By America-first:
I'm in PBC where the gun ranges are currently full of cars with NY, Mass, Conn. NJ........license plates and whose occupants are enjoying their gun rights seasonally here in Florida, but then vote for gun grabbing autocrats anyway.
View Quote
Same here. It's mind blowing.
“When you have to shoot…shoot, don’t talk.” Tuco
Didn't Desoto County just pass this?
Experience is what you get right after you need it.

Originally Posted By CplRick: The line of credit on the Race Card is maxed out, sorry.
Make sure these counties are really checked before putting them on the map.  Polk County just voted to be a 2A sanctuary, but do not act too quickly to add them.

The Polk County Commission on Tuesday reversed course from its Friday meeting and approved a resolution affirming its support for gun rights, including language declaring the county a sanctuary.
View Quote
https://drrichswier.com/2019/09/01/florida-top-3-counties-with-the-highest-number-of-red-flag-law-gun-confiscations-polk-pinellas-broward/

Since the Marjory Stoneman Douglas High School Public Safety Act went into effect, 2,380 risk protection orders have been issued across the state of Florida, according to data from the Florida Clerks of Court Operations Corporation. Polk County has issued the most of any county at 378, with Pinellas County close behind with 350. Broward County, home to Parkland, has issued 327, Volusia County has issued the next most with 173, then Miami-Dade County with 127 and Hillsborough County with 116
View Quote
Thank you to my anonymous benefactor.
Citrus here, glad to see where I guessed we would be, a true sanctuary for firearms. . . And manatees. XD so many manatees, but the women love them so they've got usefulness. I always wondered what one taste like but not THAT much. Eventually I found a super old article in a newspaper (from early 1900's) that commented they taste like just fat... What a surprise considering they're mostly fat. Anyway we have basically no shooting ranges, we do but you know what I mean. But we do truly have no long, past about 50yrds, ranges. To make up for that though we have the most liberal and open laws concerning where you can just shoot. As long as the place aint posted and it isn't shooting across a street. . . That's it. So pulling off the road down one of our long, very long forest laden roads and going a few feet into the forest you're all good. Try that in California and see what happens, (I don't actually know but I'd guess somethiang bad ending in a 3rd degree felony and extensive fees). Come here if you wanna shoot privately but be careful in dry seasons when there's been no rain, be respectful and responsible to not set anything on fire. Dragon's Breath rounds are illegal!

Other than that kewl fact we also have a blues Bros life-size statue which is freaking awesome... And that's every single thing noteworthy in Citrus... Yes we do have lots of citrus fruit, pomelos, clementines which are just tiny bitter oranges, grapefruit etc... You'll stumble upon a hidden field of overgrown citrus trees if you explore a little here lol carry a shotgun or a serious caliber Blackhawk for Retics though, once found a dead albino python someone let loose as a pet, was about 9ft I think, I have the picture here somewhere, I'll post if I can find it but not on this thread ofc.

Quote History
Originally Posted By MadeintheUSA:
Originally Posted By America-first:
I'm in PBC where the gun ranges are currently full of cars with NY, Mass, Conn. NJ........license plates and whose occupants are enjoying their gun rights seasonally here in Florida, but then vote for gun grabbing autocrats anyway.
Same here. It's mind blowing.

Bless you as that is so correct. I have so much true and bitter hatred for someone that you think talks smart enough and recognizes the problems of anti-gun liars, then votes for them every f****** time!

Not supposed to hate anybody with being a devout celibate Christian (Baptist) but I haven't figured out how to do that with those kinds of people. No smart Alec remarks here, those people will cause the greatest amount of destruction, gun owners that vote wrongly and give up and allow God given rights to be raped to death by AOC and Chuckyyucky and S*** show Adam and faker than any star, buttgig or whatever

Citrus as well ... well after the homes up. Im building on the edge of Ocala/  Dunelon haven’t found a place to Shoot yet . But i’m glad to find out the county is a sanctuary zone .
Chimney Sweep Beating Metal into submission since 1990
Fav qoute ch?y tr?n ho?c gi?t t?t c? và d?t hooches c?a h?
What are the legal aspects of sanctuary counties in relation to anti 2A laws ,compared to non sanctuary counties  ?
GOA-SAF >nra
It's mostly symbolic but it could mean that County officials and Sheriffs will not enforce anti-2A laws passed by Feds.