Quinn-Davidson has been an advocate for masks and has mandated them throughout the municipality. She wears one religiously.
View Quote

It was not immediately clear where Quinn-Davidson contracted the virus, and Slomski-Pritz said “she has been extremely careful.”
View Quote
Mike_314’s friend:
"There's 2 parties, the party of big government and the party of bigger government."
She wears one religiously.

"she has been extremely careful."
View Quote
And yet here we are.  They point fingers at Republicans that have caught COVID and say "That's what happens when you don't wear a mask." and then openly wish death on them.  Can't wait to hear the excuses.  What's next?  Locking people in their homes?

This was a good episode of the MRAK podcast about this week's shitshow of an Anchorage Assembly meeting. A conservative member asked the city public health person if we could control the coof. She said yes, if we wear masks and wash our hands. But the mayor does all that and caught it, does that really work? And if washing our hands and wearing a mask is what it takes to control the coof, why are we shutting down businesses? You didn't cite that as a way to control it, but we're doing it. Why? 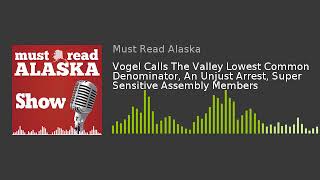 He hints around a really interesting point here where he mentions Anchorage residents are coming to the valley to shop/dine. The correlation between the restrictions tightening in Anchorage and the case count rising in the valley is pretty evident. According to usafacts.org the valley maintained no new cases reported between November 19th and December 4th with 2477 known cases. December 5th comes around and the valley's numbers nearly double (46% increase) to 4,662. December 5th to the 10th we see a 51% overall increase with known cases totaling 5090.

"A little nonsense now and then, is relished by the wisest men."
Just before it got cold, the Wife and I were loading the trailer with firewood.  A nice couple (father and daughter) from Wasilla stopped and chatted with us.  He had hunted the area a lot when he was younger (noted how much it'd changed!) and just wanted to see it again.  They needed directions on how the roads connect back to the highway.  She said they were out sightseeing to get away from the folks from Anchorage that were coming to Wasilla because of the more lax Covid restrictions.

The whole title of the post makes me laugh, while not an Anchorage resident anymore (wont pay $280K for a condo or house in crackville) you guys act like this isn't the first time you have had an acting mayor. Do I think her, Rivera , and the rest of the leftist assembly is totally stupid ? No doubt but acting like she's not a legal mayor is retarded. If I was an Anchorage resident I would be ashamed at the shit show that the assembly meetings have become. Rivera and his handling of the assembly meetings , yeah thats down write stupid stopping and complaining that people are calling out assembly members by name. He should be glad Anchorage residents can't tar and feather people.


Austin Quinn-Davidson, Acting Mayor with Zero Votes, has COVID-19 (and wears a mask)