For as long as I’ve been into guns and shooting the bulk of my focus has been fairly evenly divided into two distinct categories of interest; The first being cutting edge, state-of-the-art-and-industry, next evolution and even near-future weapon platforms. The second category, arguably diametrically opposed with the first, is that of unique and/or quirky detours from historical firearm development. Those classic antique guns that were oddities of their time have always grabbed my attention, peaked my interest, and invoked a strange obsession appropriate of the strange nature of the guns themselves.

To put it in different terms, I have a particular interest in firearms that could be fairly considered to be of the “Cyberpunk” and “Steampunk” genres, respectively.

As some of you may be aware I’ve spent the last few years dedicating my time and resources towards development of the first category with my Project Nemesis builds, modifying and upgrading the Sig P320 platform with just about every useful modern gadget, gizmo, and design philosophy in an attempt to maximize the mechanical performance potential of a modern duty pistol (to those interested, that thread can be found here: https://www.ar15.com/forums/handguns/Introducing-Project-Nemesis-The-P320-Roland-Special/14-182311/ ). 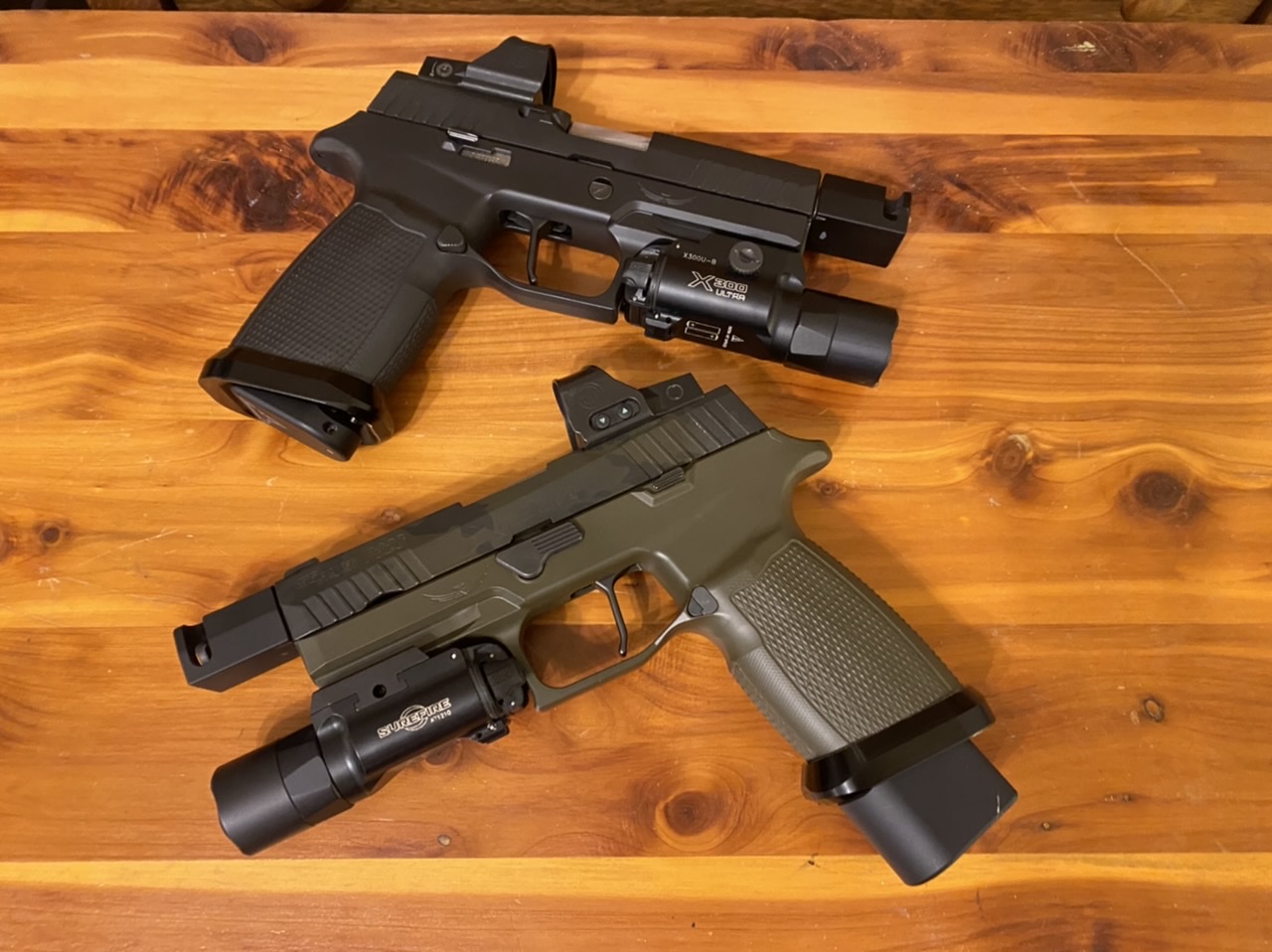 After many years, much effort and resources, and a lot of trial and error I’m extremely pleased with the culmination of my efforts which have resulted in a selection of some of the best shooting, most accurate, most broadly capable handguns I’ve ever shot or seen. While I have no allusions to the idea that my P320 shenanigans are or ever will be complete - there will always continue to be excellent new products and parts developed for the platform by the aftermarket that will help squeeze just a bit more performance out of the pistol - I have reached a point where I’m feeling the urge to shift my attention to the second category of interest. It’s now time for me to appreciate something old and odd.

Background: History of the Apache Pistols

(Note: While I’ve done my best to gather and organize the relevant historical context, I must confess I’m no history major and there’s a lot of conflicting information on this topic available to the casual researcher. I can’t vouch for the exact veracity of every claim, but this is the story as I’ve been able to decipher it)

Anyone with even a modicum of interest in historical firearms curiosa will have at one time or another stumbled across the enigmatic “Apache” pistol - an odd amalgamation of a pinfire pepperbox revolver, a small folding dagger, and a brutish looking set of brass knuckles, all rolled into one Transformers-esque package that could be easily slipped into the pocket of a pair of ye olde trousers or smoking jacket. 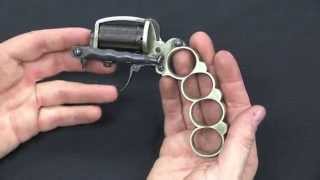 While many are likely familiar with the pistol in the video above, what many may not know is that this was just one of several variants of combination pistol/knuckleduster weapons (I prefer the term “Knuckleguns” when describing the category as a whole) that were manufactured in the mid to late 1800s. 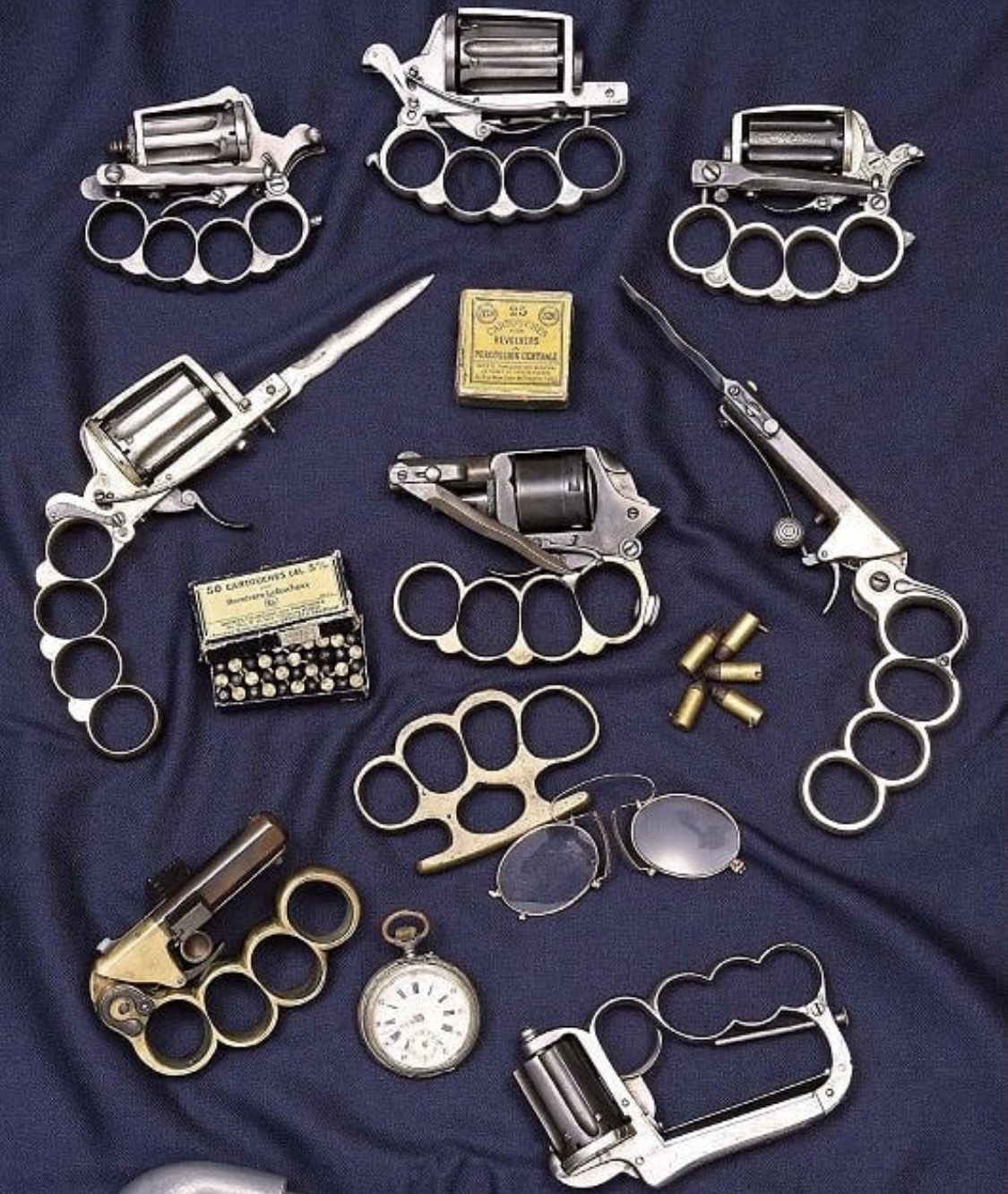 The most well known variant of these pistols would be the Dolne pistol, named appropriately after Louis Dolne who designed this particular variant. Other examples of Knuckleguns of the same period are the Belgian Delhaxhe combination revolver designed by Joseph Delhaxhe, the Sure Defender, and the True Companion - among other even more obscure examples. 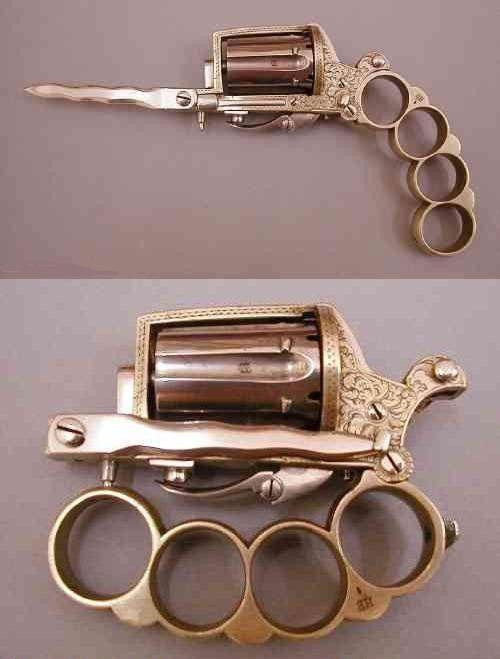 Dolne combination revolver - often referred to as “the” Apache pistol 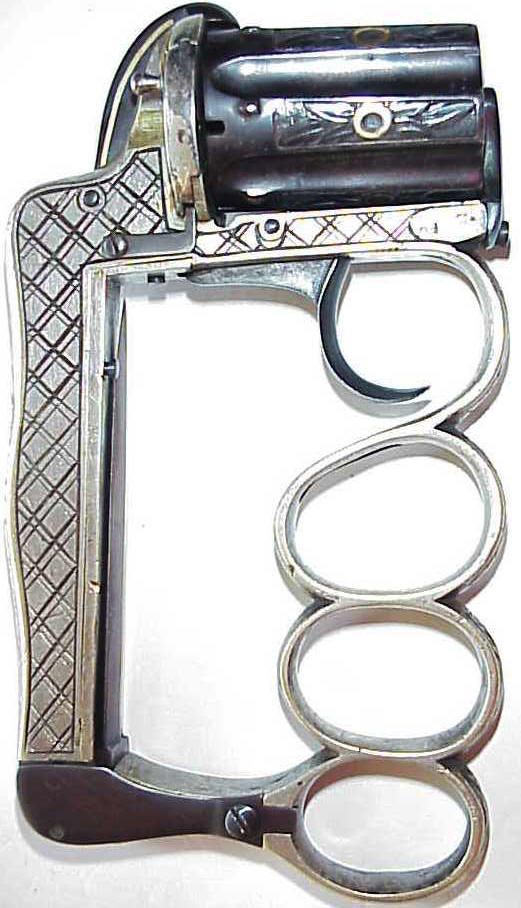 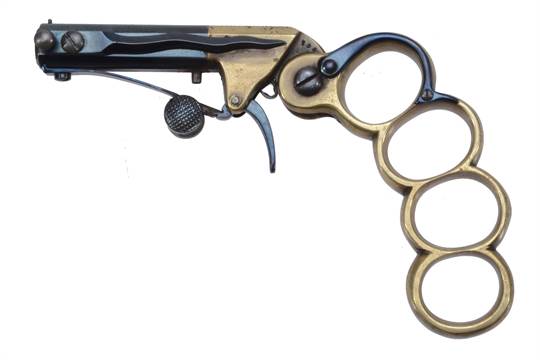 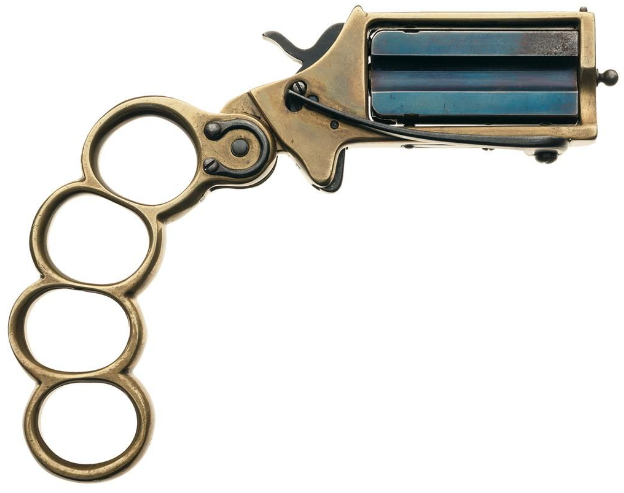 So where did the “Apache” name come from? While not likely used to refer to the family of Knuckleguns at the time of their manufacture or use, the Apache moniker became entangled with the Dolne revolver in particular and Knuckleguns as a whole due to their popularity among and association with members of the Parisian criminal gang “Les Apaches”, a “violent criminal underworld subculture of early 20th-century hooligans, night muggers, street gangs and other criminals,” who themselves acquired the Apache label for allegedly being “as violent and cruel as the American Apache Indians.” I’m sure their parents were very proud.

The Project: Turning a NAA Mini Revolver into a Steampunk Retro-Modern Knucklegun Homage

Finally, to the purpose of this thread! Ever since learning about the history of the Apache Knuckleguns many years ago I’ve wanted to try building one of my own. Recent events conspired and that dream is finally becoming a reality. My project will be based on the popular NAA Pug 22Mag mini revolver, in my case one of the limited-edition “The Dude” models of the Pug, of which only 2,000 were made. 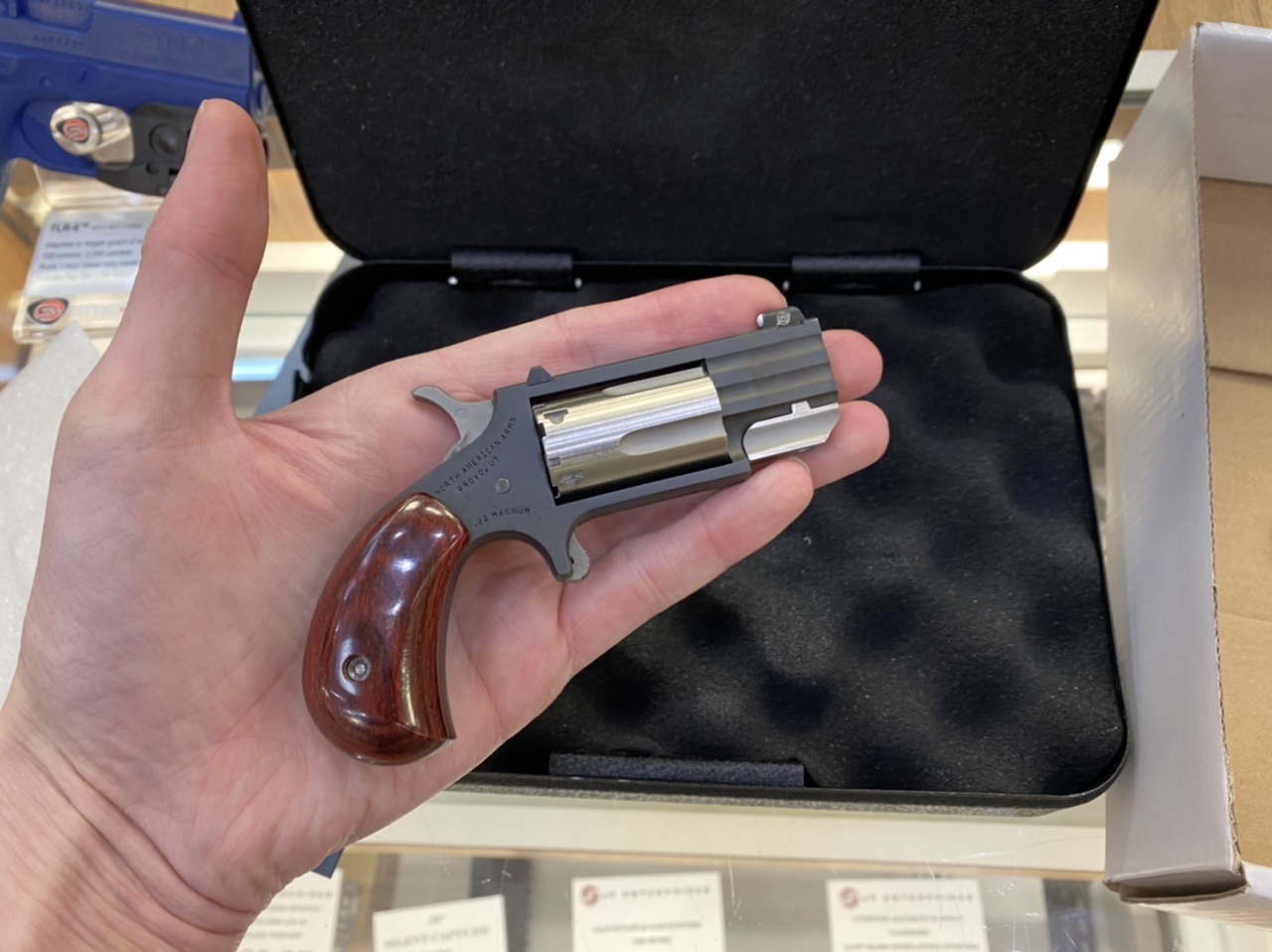 While the Dolne revolver is the most popularly known Knucklegun variant, the intricacies of the folding grip mechanism make it less appealing to me from the viewpoints of cost, complexity, and practicality. Having to stop and reconfigure the weapon, folding/unfolding it in the middle of a deadly confrontation is a dubious manual of arms at best (Full Conceal anyone?). For that reason as well as my own personal preferences, my Knucklegun project will be loosely based on the Delhaxhe revolver variant, with the muzzle of the revolver fixed in the same orientation as the strike face of the impact surface of the knuckles. This affords practical use of the weapon as both a firearm and an impact tool from one universal, unchanging grip. 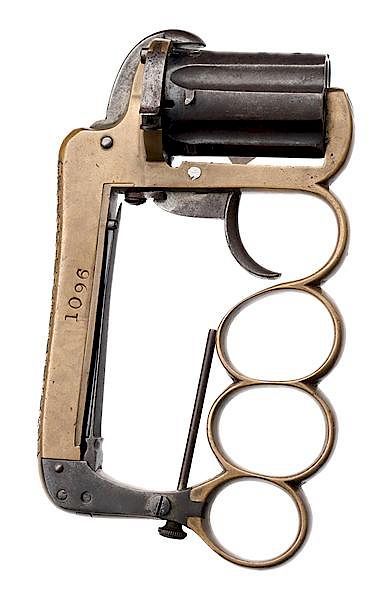 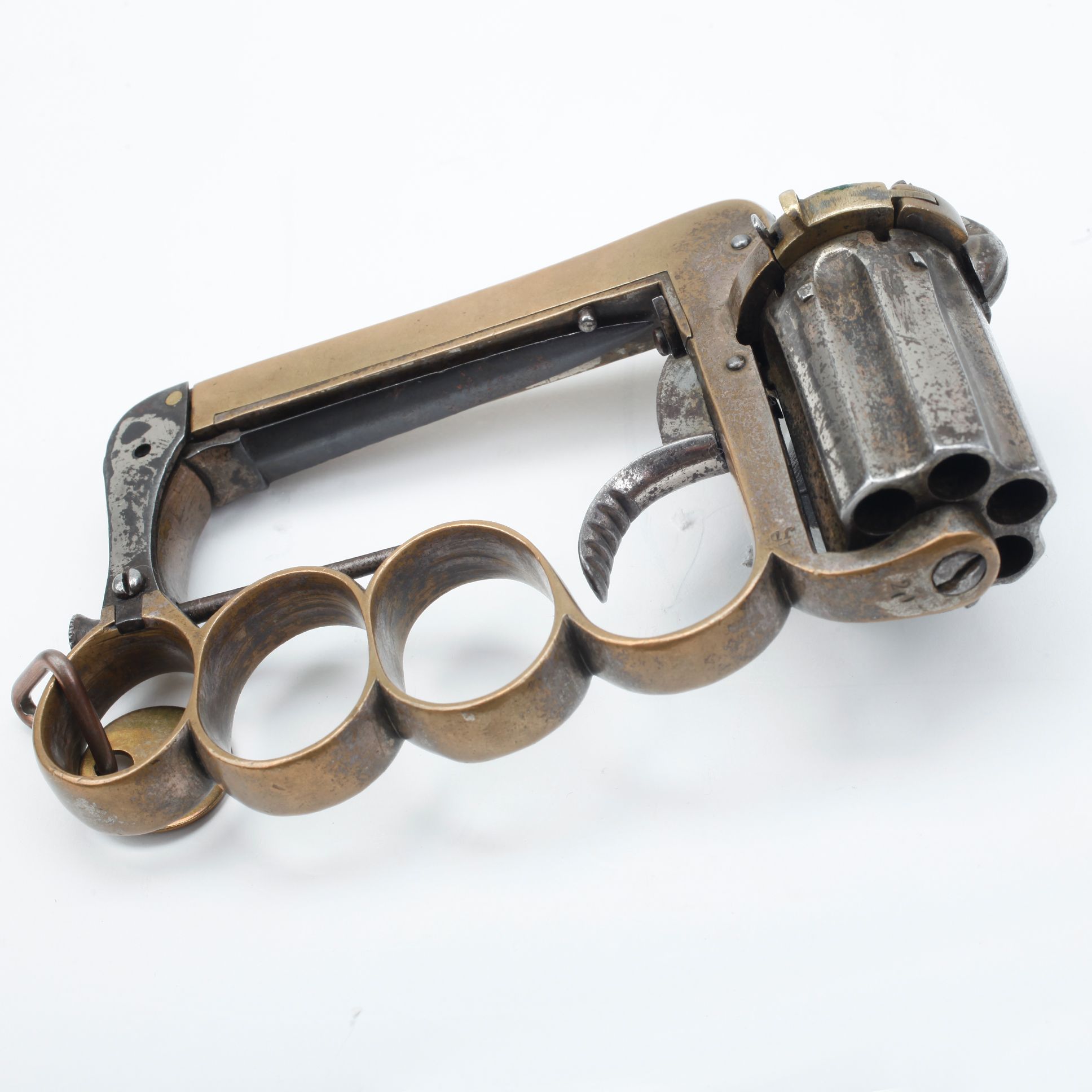 I’ve contacted and commissioned a maker of custom brass knuckles who is also familiar with NAA revolvers and the original Apache Knuckleguns (@billy_trident on Instagram) to design and fabricate a special set of four-finger brass knuckles that will attach to the frame of the Pug like a set of replacement grips, solidly integrating the revolver and the knuckles together. The index finger stall of the knuckles will act as the trigger guard, while the remaining stalls and palm brace will create a much more hand-filling and controllable grip for the revolver, ultimately making it far more shootable than the diminutive stock grip. The extra weight of the knuckles will act to absorb what little recoil there is from the 22Mag rounds, and of course will serve as a venerable close-contact impact weapon if and when the cylinder of the revolver runs dry.

The completed project will not be an exact duplicate of any of the historical Knucklegun variants but will encapsulate the same philosophy of use and spirit of the original designers with a discernibly “Steampunk” twist, and hopefully pay appropriate 21st Century tribute to one of the most curious branches of historical self defense firearms development.

For those who are interested feel free to follow along here, pictures and updates will be added as they happen. Any questions or comments are also always welcome!